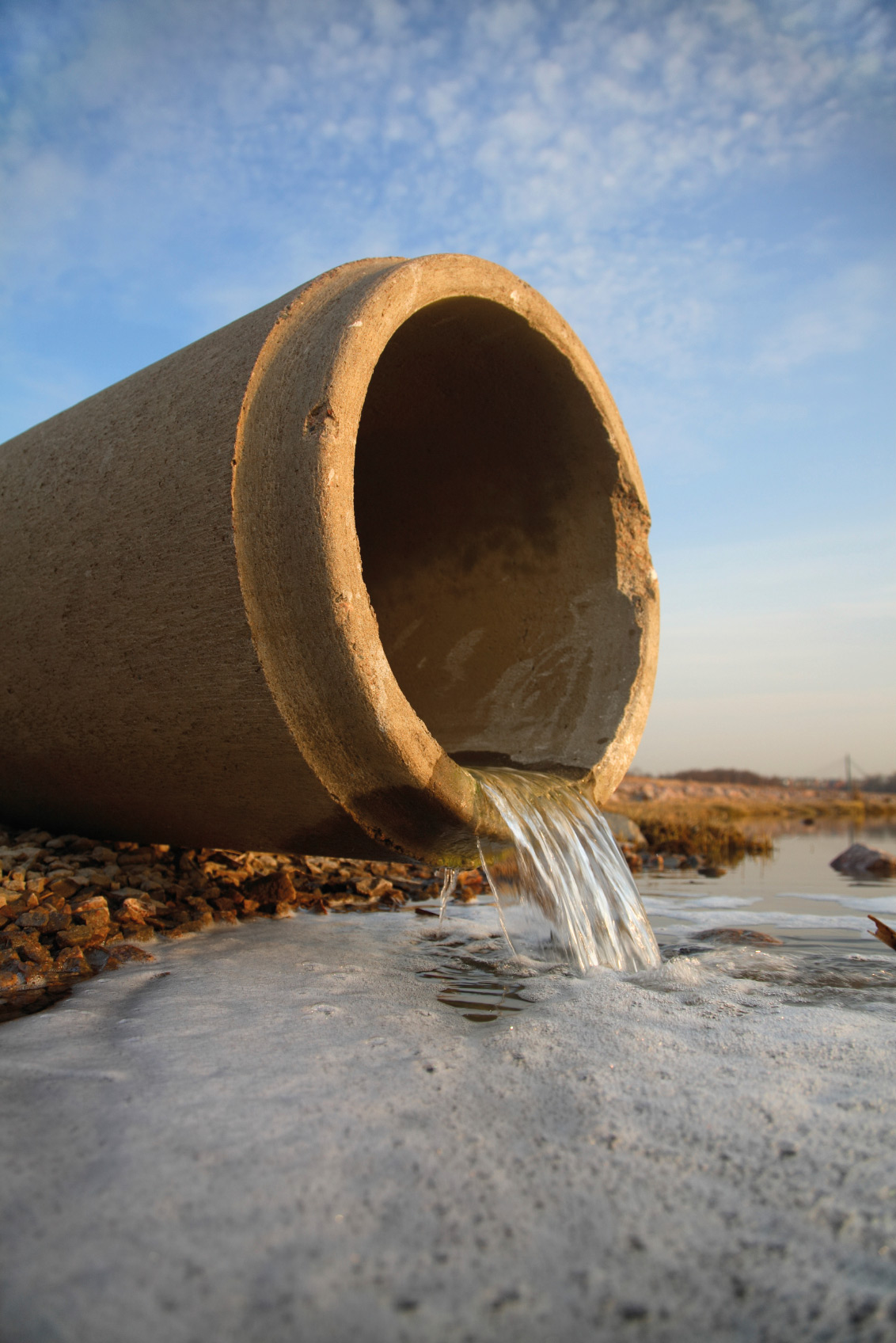 Analysis of EPA624 regulated volatile organic compounds in drinking and wastewater is usually performed with headspace or purge and trap technique using a so-called 624 phase with 30 m, 0.25 mm and 1.4 µm. Reducing analysis time (fast GC) but maintaining chromatographic resolution has been applied successfully using narrow bore columns in various fields. However, the reported results were based mainly on liquid injection techniques.

In headspace analysis the transfer of sample from the insert to the column is quite slow as small split ratios are normally used in favor of sensitivity. The spatial distribution of analyte molecules in the glass insert cannot therefore be refocused easily, and fast GC approaches are difficult. A cold trap (cryofocus, ATASGL, The Netherlands) was therefore mounted at the top of the column directly under the injector, cooling the first part of the column in order to refocus volatile compounds showing a broad band during passage through the injector liner. The cooling was established by direct transfer of liquid nitrogen to the trap.

Instrumentation used was a Shimadzu GCMS-QP2010 Ultra with an AOC-5000 Plus headspace sampler. As the column is surrounded by the directly cooled cryofocus, refocusing takes place inside the column. In this study, the inner diameter of the chosen column was 0.18 mm. Length and film thickness were 20 m and 1 µm respectively. Split ratio was 5:1 and the linear velocity was set to 45 cm/s. The GC oven temperature began at 40 °C for 5 min and then ramped with 50 °C/min to 120 °C, 30 °C/min to 170 °C, 60 °C/min to 220 °C. Injection volume was 1 mL headspace from a 20 mL vial filled with 5 mL water matrix. Different cold trap temperatures were set. The mass spectrometer was operated in scan and selected ion monitoring (SIM) mode for highly sensitive analysis.

Figure 1 (left) shows the m/z 62 relative to vinyl chloride for different cryofocus temperatures. The largest effect of refocusing monitored by measuring the peak profile at the end of the column in the mass spectrometric detector was observed at -140 °C cold trap temperature and subsequent heating to 250 °C at a rate of 50 °C/s. Figure 1 (right) shows the influence of different heating rates for vinyl chloride indicating that 50 °C/s ensures that the releasing process is fast enough to obtain good peak shapes. The peak width at half maximum is 8 sec and 0.5 sec for cryofocus temperatures of 0 °C and -140 °C, respectively. The peak height is increased drastically, with considerable improvement to the limit of detection (LOD). The complete chromatogram is shown in figure 2 and the compounds are listed in table 1. 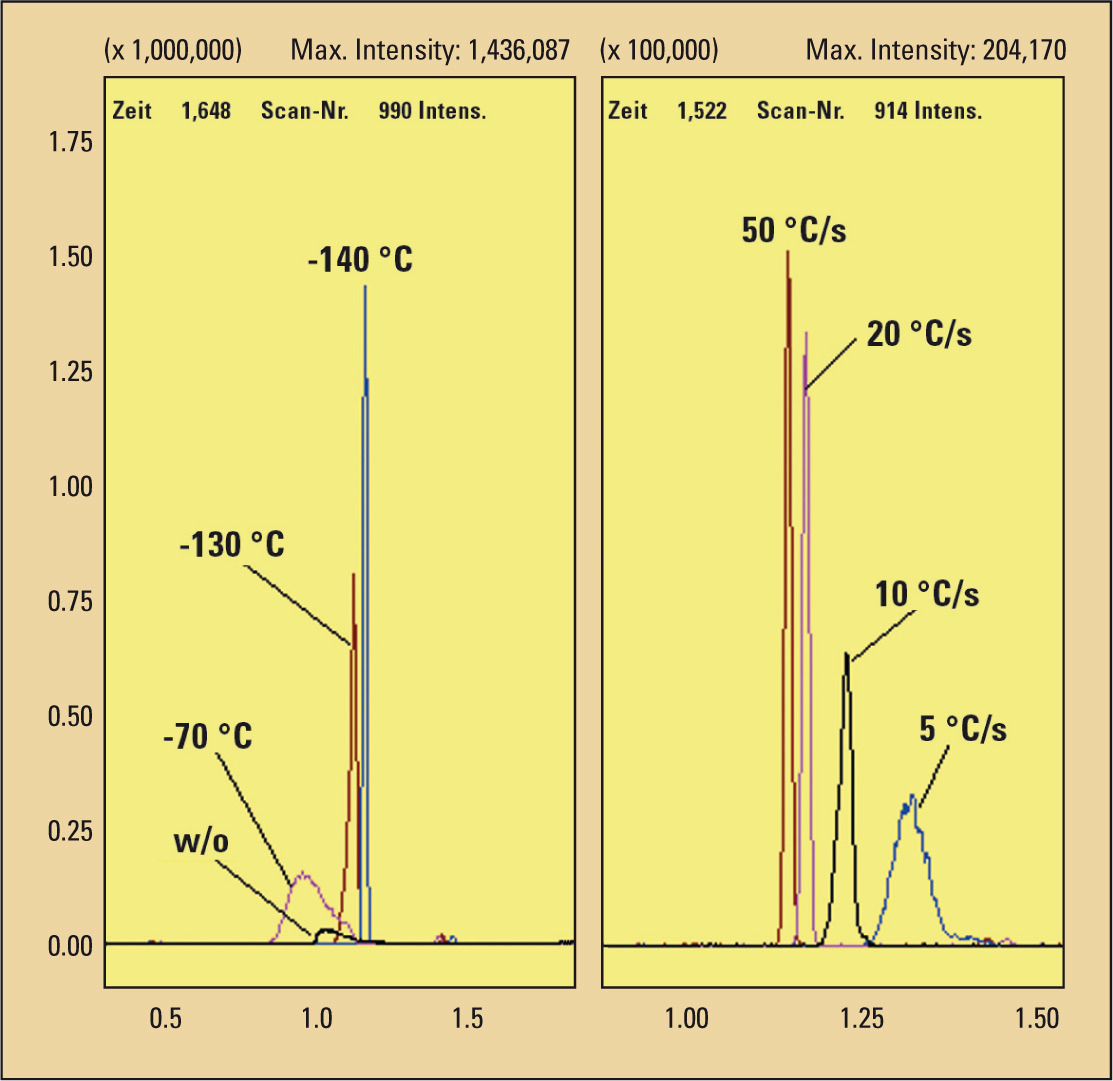 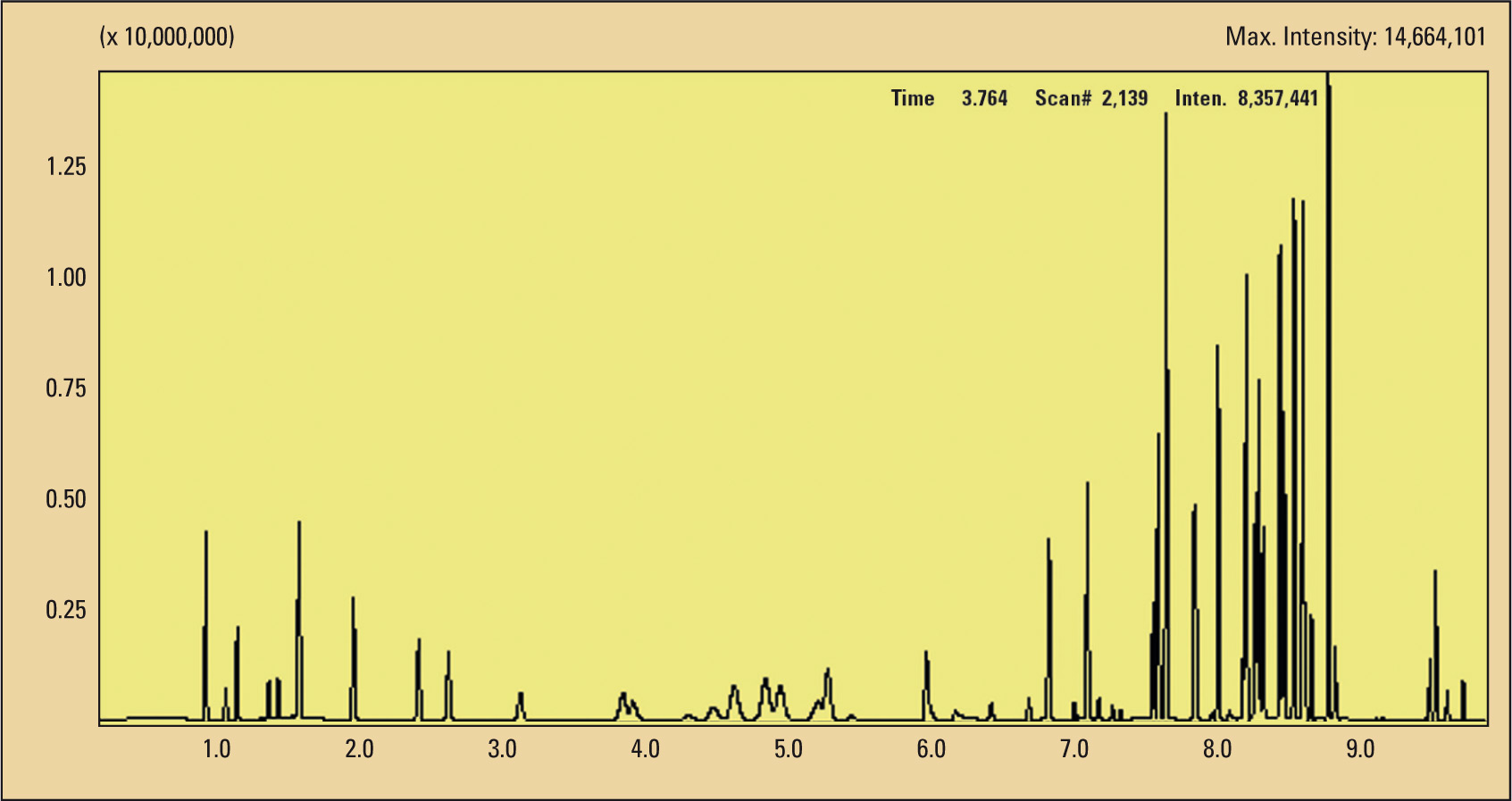 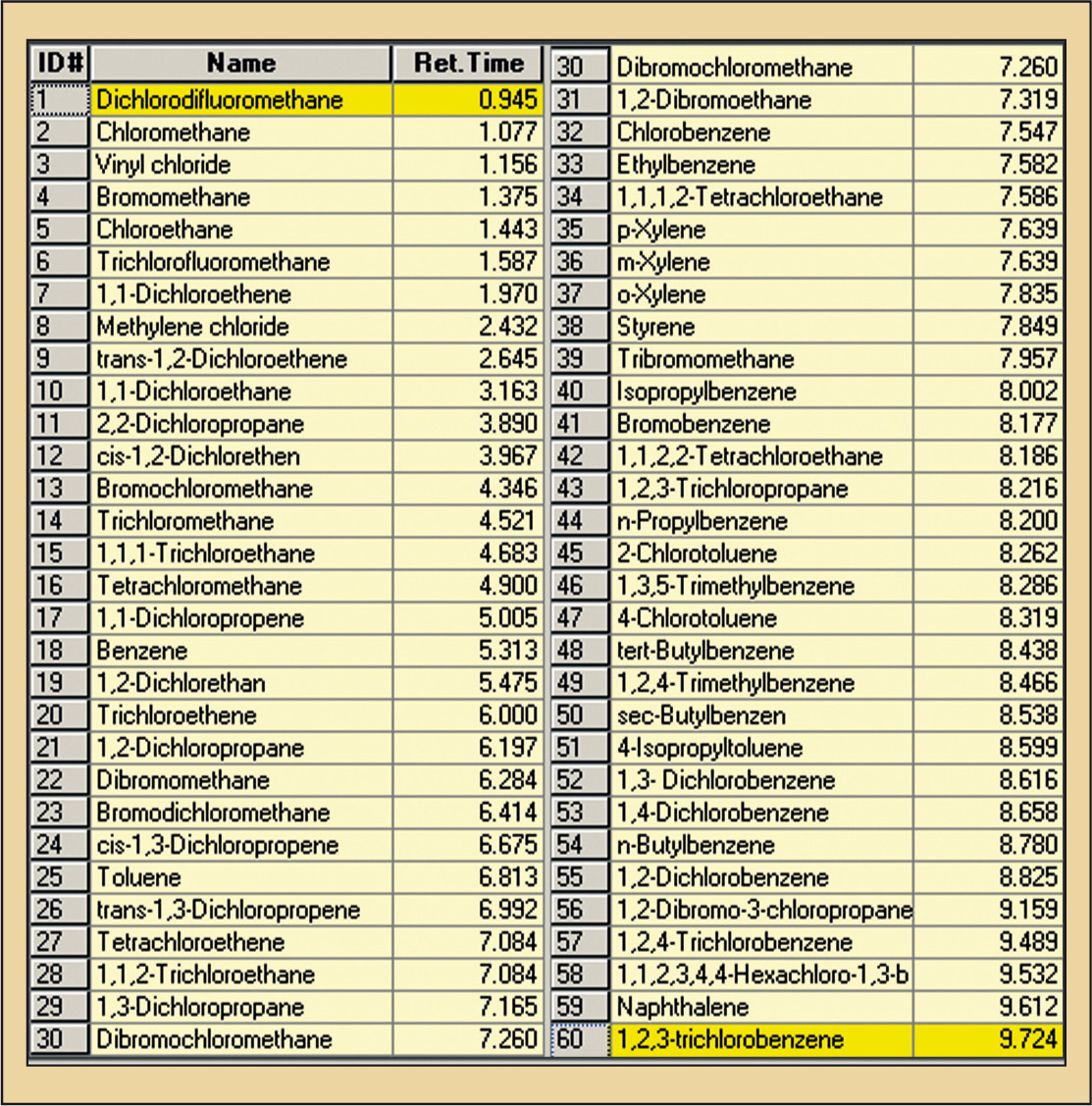 Table 1: List of volatile compounds and retention times in minutes

Analysis time for 60 volatile compounds was less than ten minutes. Calibration was performed between 0.001 and 1 µg/ L. The regression coefficient R showed values of better than 0.998 for all compounds, indicating the high method precision. Two curves are shown in figure 3. 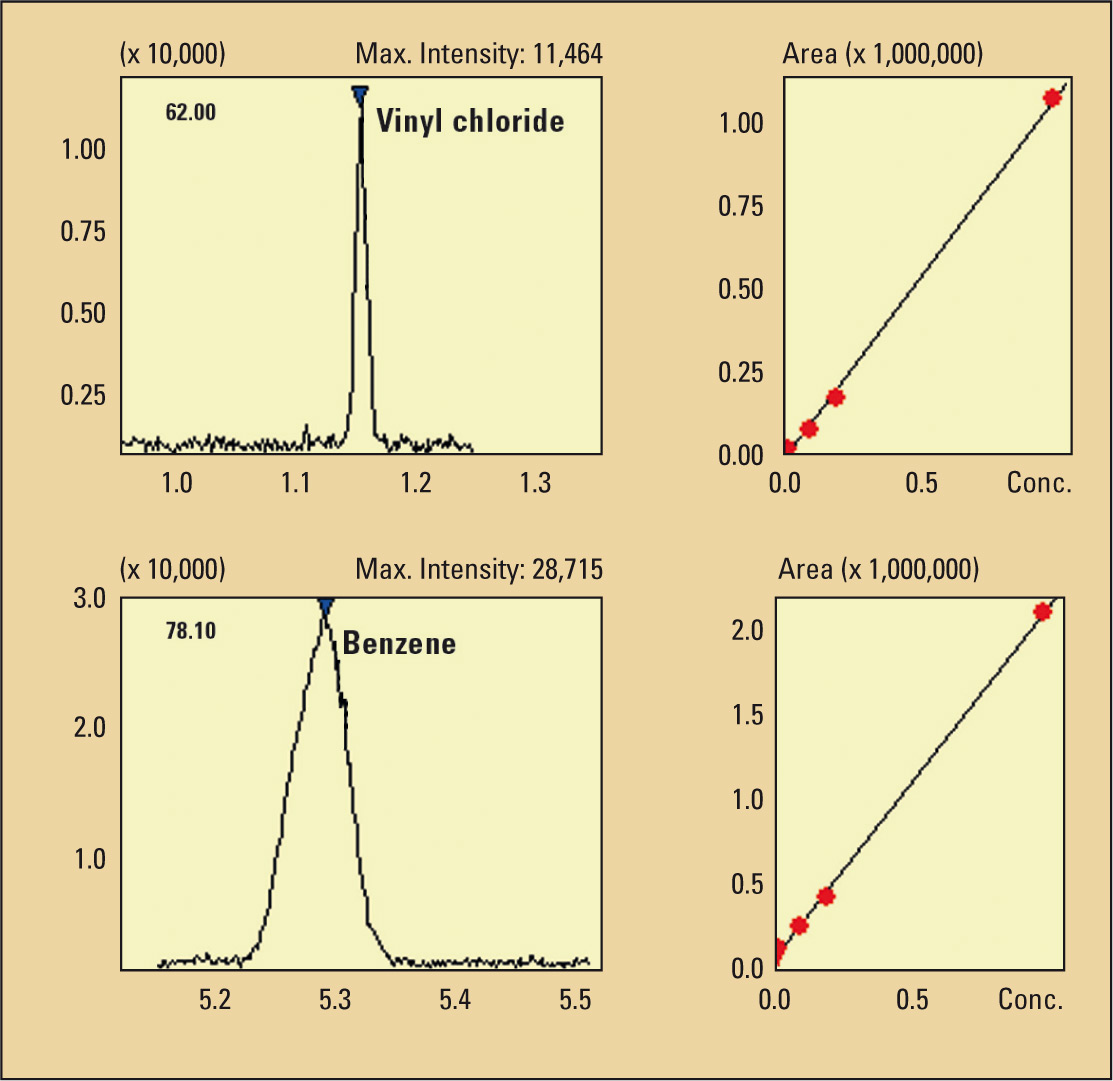 The LOD for benzene and vinyl chloride was determined as 0.005 µg/L and 0.001 µg/L respectively. In figure 4, the selected ion mass traces for tetrachloroethene and 1,1,2-trichloroethane of a real sample (the Rhine River water) is shown. Both concentrations were determined as 0.02 µg/L. 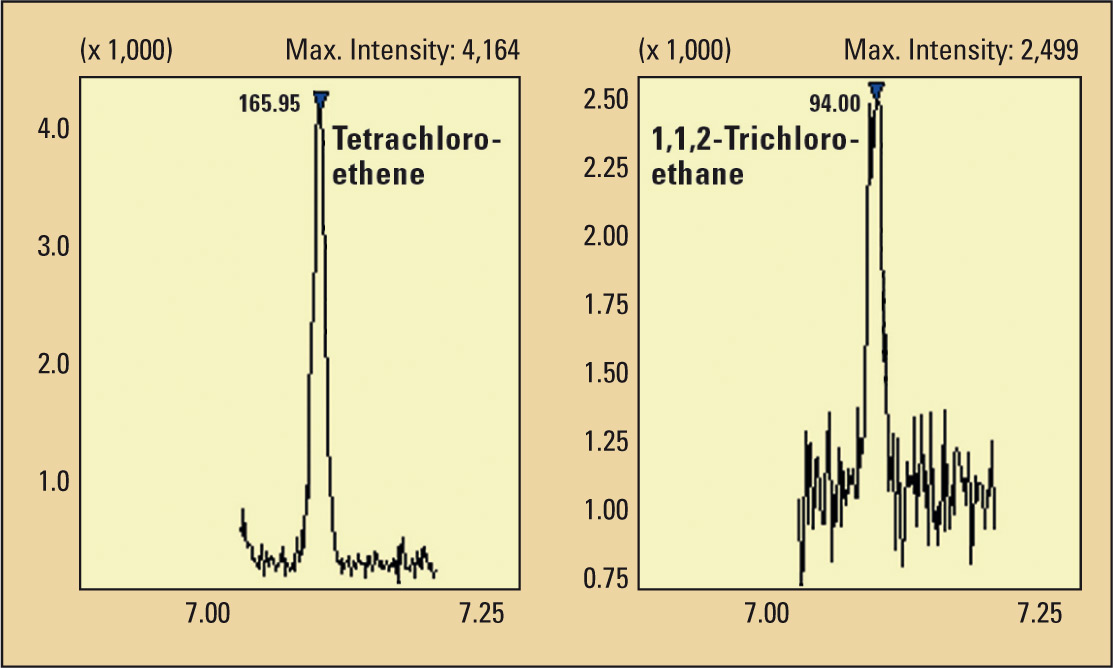 Figure 4: Peaks of tetrachloroethene and 1,1,2-trichloroethane measured for a water sample taken from the Rhine River