Big potential with protein based drugs

The future of pharmacy will be a special category of therapeutics and diagnostics referred to as protein-based drugs. To date, modern medicine has relied heavily on synthetically or chemically produced drugs to treat and prevent ailments and diseases. 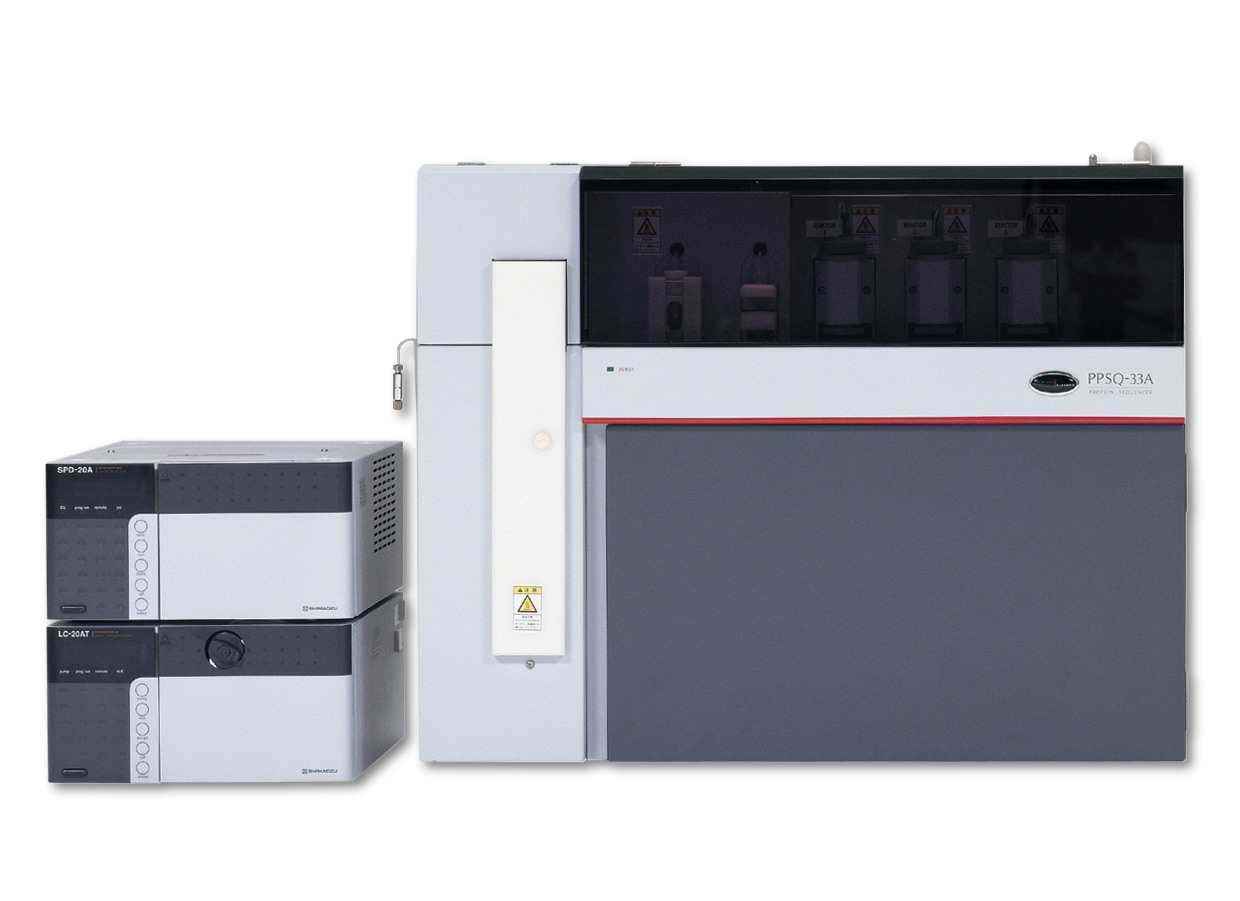 However, developments in molecular biology have led to an increase in knowledge of biological systems and their interactions. For example, scientists now know more about the sources of many diseases and how the human body fights them. They now focus on using the body’s own tools for developing therapeutics that mimic the actions of the body’s arsenal. Today, advances in biotechnology have led to increased use of living organisms and biological substances in the production of protein drugs for human health care. Specifically, the use of recombinant DNA (rDNA) technology has enabled the production of large quantities of protein drugs.

Today, several types of protein based-drugs are available, for example:
1) Cytokines
These drugs regulate the immune system. They are proteins which activate the immune system cells to carry out different immune functions.
2) Hormones
Protein drugs that regulate functions in the body. As drugs, these proteins can be used to elevate levels of specific hormones, such as estrogen during menopause or growth deficiency. They can also be used to treat certain diseases such as diabetes, or conditions such as infertility.
3) Clotting factors
Proteins that regulate the clotting of blood. These drugs are used to treat blood clotting disorders such as hemophilia.
4) Vaccines
Proteins that stimulate the immune system to produce specific antibodies used to prevent or treat diseases.
5) Monoclonal Antibodies
Proteins that mark a specific foreign material (such as cancer cells, disease-causing bacteria or viruses) for removal or destruction by other components of the immune system. These are also used as effective diagnostic tools for many specific genetic diseases and other conditions such as pregnancy.

The first substance of this kind approved for therapeutic use was biosynthetic ‘human’ insulin made via recombinant DNA technology.

Protein production and process optimization needs good quality control in order to avoid conditions producing truncated versions of the protein or having a higher level of impurities in the sample. The method of choice is still the N-terminal sequencing method or so-called Edman Sequencing.

Edman degradation, developed by Pehr Edman, is a method of sequencing amino acids in a peptide or protein. In this method, the amino-terminal residue is labeled and cleaved from the peptide without disrupting other peptide bonds between other amino acid residues. Phenyl isothiocyanate is reacted with uncharged terminal amino group under mildly alkaline conditions to form a phenylthiocarbamoyl derivative. This derivative of the terminal amino acid is then cleaved under acidic conditions as a thiazolinone derivative. The thiazolinone amino acid is then selectively extracted into an organic solvent and treated with acid to form the more stable phenylthiohydantoin (PTH)-amino acid derivative that can be identified using chromatography and comparison with standards. This procedure can be repeated to identify the next amino acid.

Although the method was established more than 40 years ago it is still used throughout different stages of drug discovery or to demonstrate comparability and consistency between batches for release during manufacturing. In Europe, different regulations of the European Medicines Agency (EMEA) need to be followed to characterize protein-based products, e.g.

The robustness of the Edman sequencing method in routine environments such as quality control, the possibility to correctly determine isobaric amino acids (Leu/Ile) and acquiring of quantitative information from the product as well as from possible impurities makes it still the method of choice. Even where mass spectrometry has replaced Edman degradation in the field of protein identification, it cannot reliably answer all questions and is more difficult to interpret. Edman degradation is therefore also used for discovery of de novo sequencing of new novel proteins or peptides. 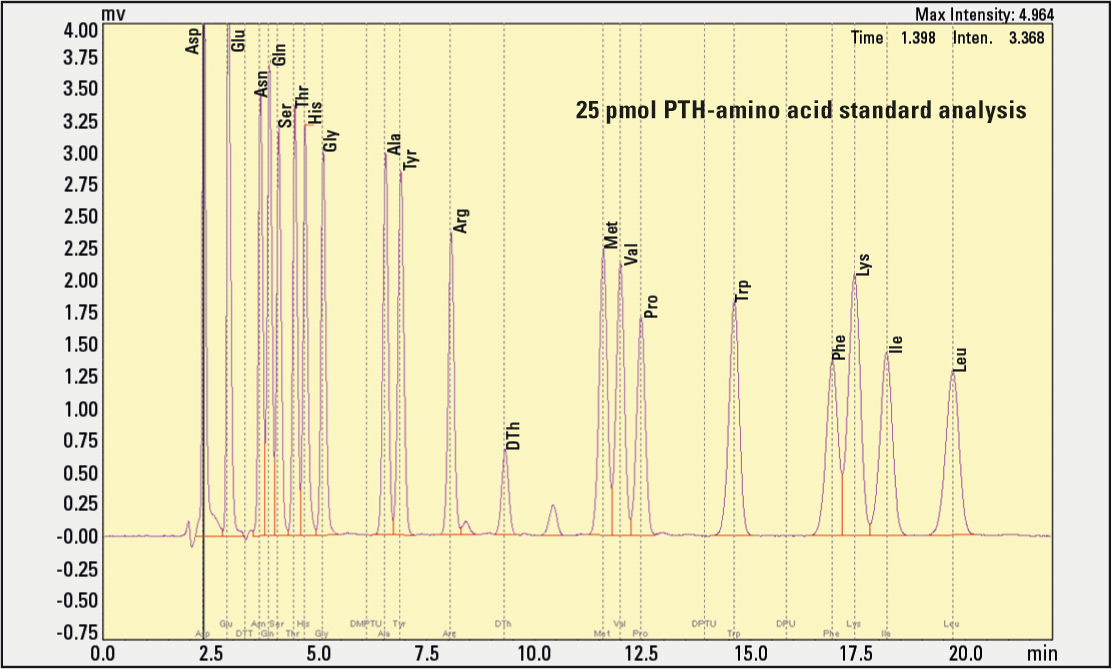 The PPSQ 31A/33A was released in Europe in 2009, based on the well-established prominence HPLC modules. The PPSQ 31 A is a single-reactor type and the PPSQ 33A is a triple-reactor type permitting sequential automated analysis of three samples to enhance analysis efficiency. 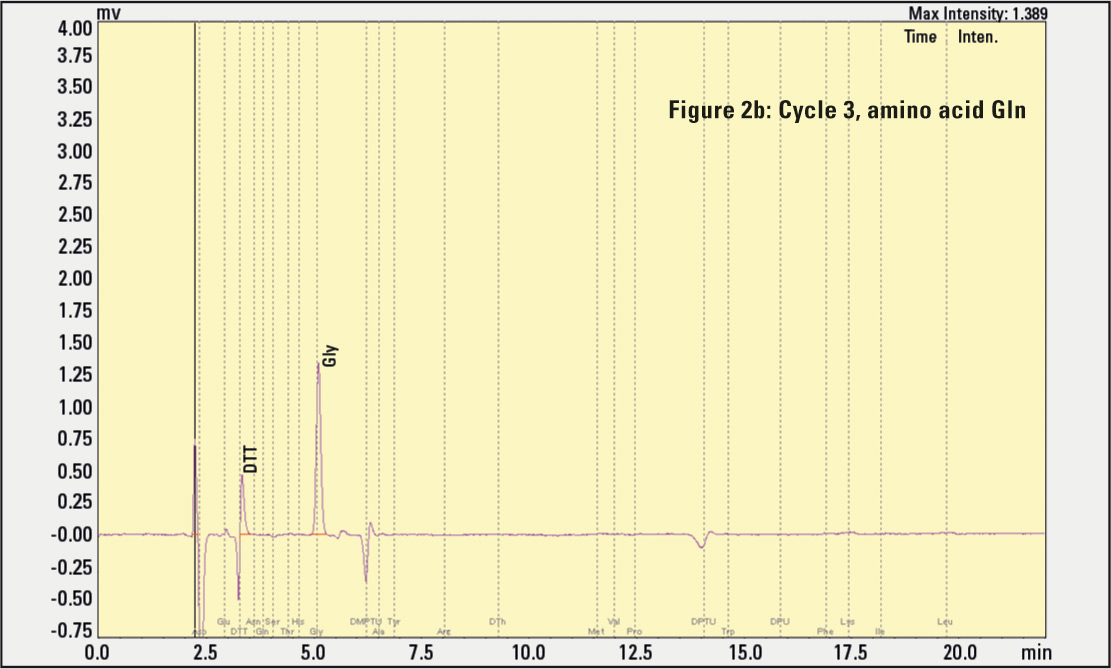 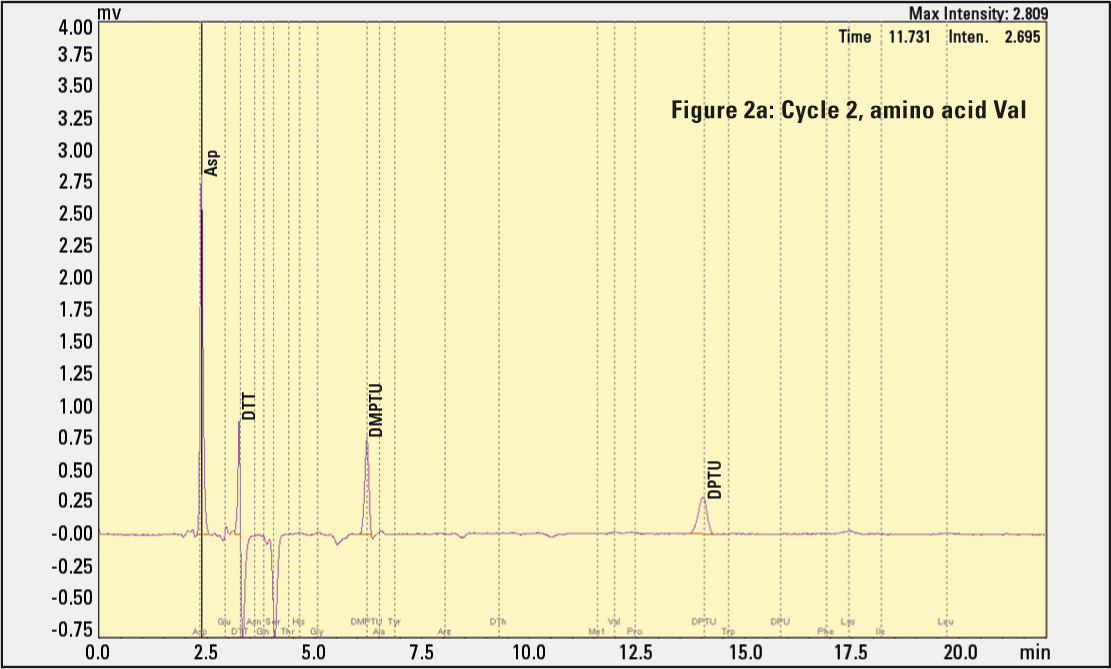 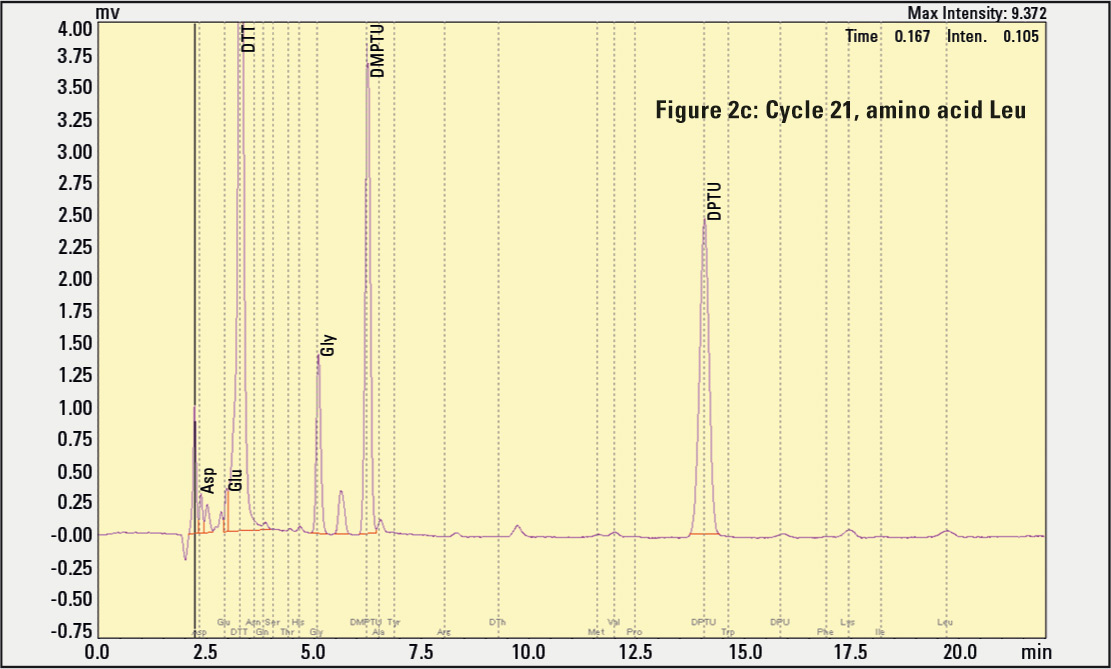 Figure 2a, 2b, 2c: Results of amino acids eluting in different cleavage cycles. The negative signal peaks result from the automatic substraction function, helping to identify rising signals in the next cycle. 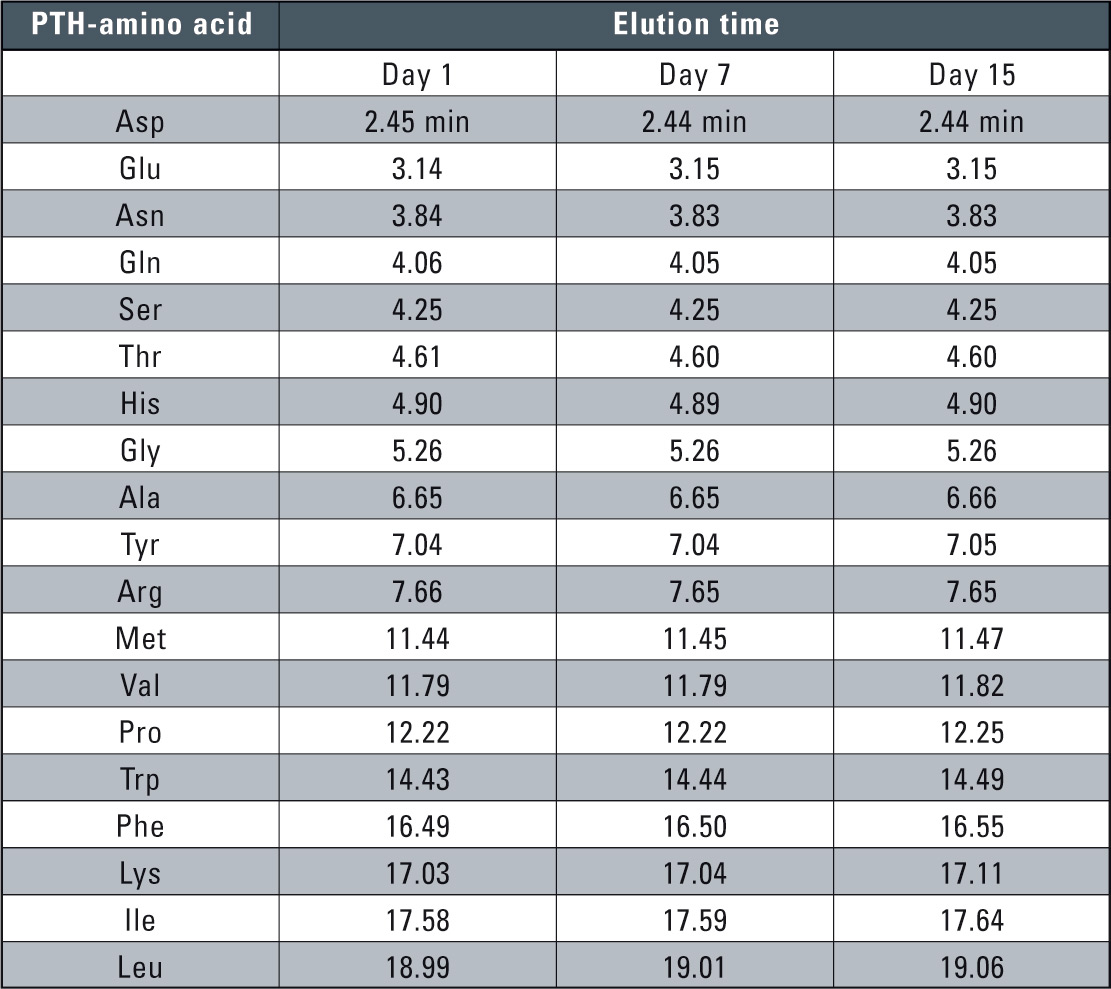 Table 1: Reproducibility of retention time of the different amino acids in comparison to 1/7/15 days

PPSQ’s capability was demonstrated impressively in the analysis of an unknown protein sample, which was correctly sequenced up to 58 cycles starting with approx. 200 pmol sample and up to 40 cycles with approx. 40 pmol sample material.