The LCMS-IT-TOF combines QIT (Ion Trap) and TOF (Time-Of-Flight) technologies. The QIT ion trap gives an efficient MSn capability. After selecting the appropriate precursor ions, several MSn experiments could be performed during one introduction of the sample, with product ions obtained serving as parent ions for the next stage of fragmentation. MSn spectra with high mass accuracy offer im­proved reliability of signal assignment and structural analysis by fragmentation pathways. The IT-TOF instrument provides high resolution and accuracy for all MS and MSn modes as well as mass stability and excellent resolution for LC-MS analysis. Such features make LCMS-IT-TOF the instrument of choice for advanced scientific studies in impurity analysis, metabolic profiling and biomarker research [1].

The research projects of the Group of Chemistry and Stereo­chemistry of Peptides and Prote­ins from the Faculty of Chemis­try, University of Wrocł aw, Poland focus on the study of peptides and proteins by mass spectrometry. Professor Zbigniew Szewczuk and coworkers investigate the structure of natural and synthetic peptides, peptide conjugates and adducts, searching for posttranslational modifications and biomarkers. Due to low concentration of some peptides in biological samples, the increase in sensitivity of MS analysis is one of the important research goals of the group.

Two examples of recent studies are presented here which due to the required MSn analysis were possible only by application of the LCMS-IT-TOF instrument.

1. MSn analysis by LCMS-IT-TOF of derivatized peptides with 4-(4-methoxyphenyl)-2,6-diphenylpyrylium salt

Tandem mass spectrometry is a powerful tool in proteomic re­search. Despite the rapid development of this technique, insufficient sensitivity is still a problem due to poor ionization of some peptides present at low concentration in the biological sample. To overcome this problem, introduction of a functional group containing stable positive charge into peptide molecule, which increases the ionization efficiency, allows sensitive detection by electrospray mass spectrometry (ESI-MS).

Recently, researchers have developed several efficient methods for peptide derivatization by quaternary ammonium salt (QAS) synthesis [2]. The highest intensity increase (as much as 1,000 x) was observed for pyrylium ionization reagents, which react readily with the primary amino groups inside chain of lysine residue to form pyridinium salts bearing a stable positive charge [3]. The peptides derivatized with pyrylium reagent can be detected even at attomolar level (10-18). A new kind of isobaric tag for peptides which is based on combination of 16O/18O exchange and derivatization by isotopologues of pyridinium salts was also proposed [4].

However, it is necessary to search for new ionization markers which will show a similar degree of ionization enhancement and have improved properties (higher solubility, sensitivity and precision of analysis). Researchers recently developed a new ionization re­agent (4-(4-methoxyphenyl)-2,6-diphenylpyrylium salt, Mdppl) to improve the applicability in proteomic research (unpublished data). Specific MSn transitions are used for unambiguous analysis of particular peptides derivatized with Mdppl.

The 4-(4-methoxyphenyl)-2,6-diphenylpyrylium salt was linked to the side chain amino group of a model peptide (Lys-Pro-Pro-Pro). Figure 1 shows ESI-MS and ESI-MSn analysis of Lys(Mtpp)-Pro-Pro-Pro. 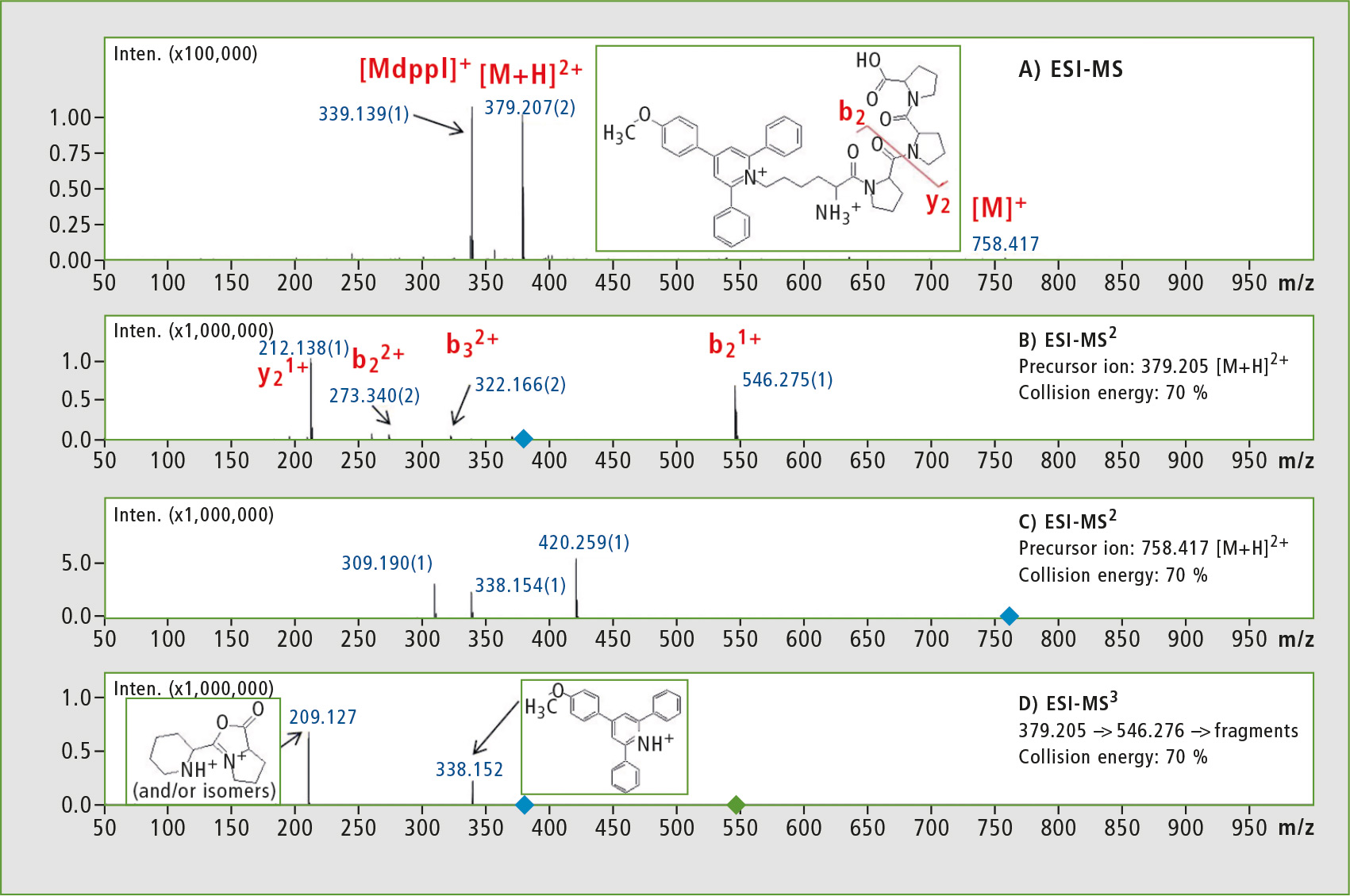 In MS2 experiments, a series of b and y ions were obtained. Due to the increase in collision energy, the intensity of m/z 338 signal grew although its intensity was still negligible. Peak at m/z 209 after MS3 experiment corresponded to the internal fragment of peptide sequence. The signal is characteristic for pyridinium salts, but it appears mainly in the charge remote fragmentation mechanism [5].

Precise analysis of the resulting fragments requires high-resolution spectra which can only be guaranteed with IT-TOF instruments. The researchers noted that fragmentation of single-charged ions gave information about ionization tag whereas the same experiment for double-charged ion provided more information about peptide sequence. When combined, these experiments provide more reliable and comprehensive structural information. The m/z 338 fragment ion can be used in MRM or parent ion scan to study all peptides containing 4-(4-methoxy­phenyl)-2,6-diphenylpyridinium groups.

To conclude, the MSn method can be used successfully for sensitive peptide sequencing at high collision energies. Such fast confirmation of the structure of derivatized peptides based on the MS3 method is extremely reliable. MS3 analysis allows unambiguous identification of peptide fragments resulting from MS2 experiments. The accuracy of the IT-TOF instrument enables determination of the mo­lecular formula of the fragments, making it possible to propose structural formulae of the ions obtained. The IT-TOF instruments not only allow the determination of fragmentation pathways, but also offer new and fast methods for identifying trace amounts of potential biomarkers in the samples tested. MSn experiments combine two fragmentation mechanisms: charge remote and charge directed.

2. Internal fragments formed during MSn for analysis of isomeric peptides

The importance of mass spectrometry analysis in peptide science is obvious at several levels – from characterization of natural or synthetic products, sequence analysis to stability studies and quantification. There is also a growing interest in application of mass spectrometry to physicochemical studies including charge variants, molecular interactions and adduct stability studies.

The main advantages of mass spectrometry include high sensitivity and unambiguous identification of product, with excellent detection levels and the possibility of application to isotopically modified reference materials.

The lipophilicity of chemical compounds, represented as logarithm of the octanol-water partition coefficient (logP), is a very important parameter in medical chemistry. Typically, logP is measured in the traditional shake-flask method (SFM) which may be time-consuming, requires significant amount of material and is of limited use in case of highly hydrophobic compounds. Various chromatographic methods including RP-TLC and RP-HPLC supplement or replace the SFM, offering several practical advantages including reproducibility, insensitivity to impurities and degradation products, broader dynamic range and reduced sample handling and sample size [6]. One of the main advantages of HPLC in lipophilicity determination is the ability to compare directly the properties of a series of compounds by analyzing mixtures.

Lipophilicity is studied thoroughly in design and development of neuropharmaceuticals due to blood-brain-barrier issues. Several research groups investigate anti­nociceptive activity of peptides [7, 8], and there is a significant interest in application of RP-HPLC to lipophilicity comparison of the analogs proposed. The LC-MS procedure seems ideal for this application, offering the additional benefits of indication of charged state of studied peptides. More complex tandem MS2 ap­proach is needed in case of isomeric peptides, to assign the peak order to proper sample components. In the recent project, the researchers encountered a problem which required a more advan­ced approach to differentiating of isomeric peptides.

To investigate the effect of se­quence modification on chroma­tographic behavior of peptides and, subsequently, their lipophi­licity, a peptide library was designed and synthesized based on podocin 290-296 fragment with a sequence Ser-Ile-Ala-Gln-Asp-Ala-Lys. The alanine residues were selected as diversity positions and replaced with tyrosine, threonine, proline, glycine and asparagine to provide a broad range of changes.

The two resulting subset libraries (modified in position 3 or 6, re­spectively) were analyzed using LC-MS. The peptides in each subset differ in molecular weight and MS analysis was sufficient to assign the signals. The elution profiles represented by extracted chromatograms (XIC) are presented in figure 2. The retention time differences between the isomeric peptides were minimal and the effect of position of the modifying residue on retention time could be studied only after a method to distinguish isomeric peptides could be established for analysis of sets. 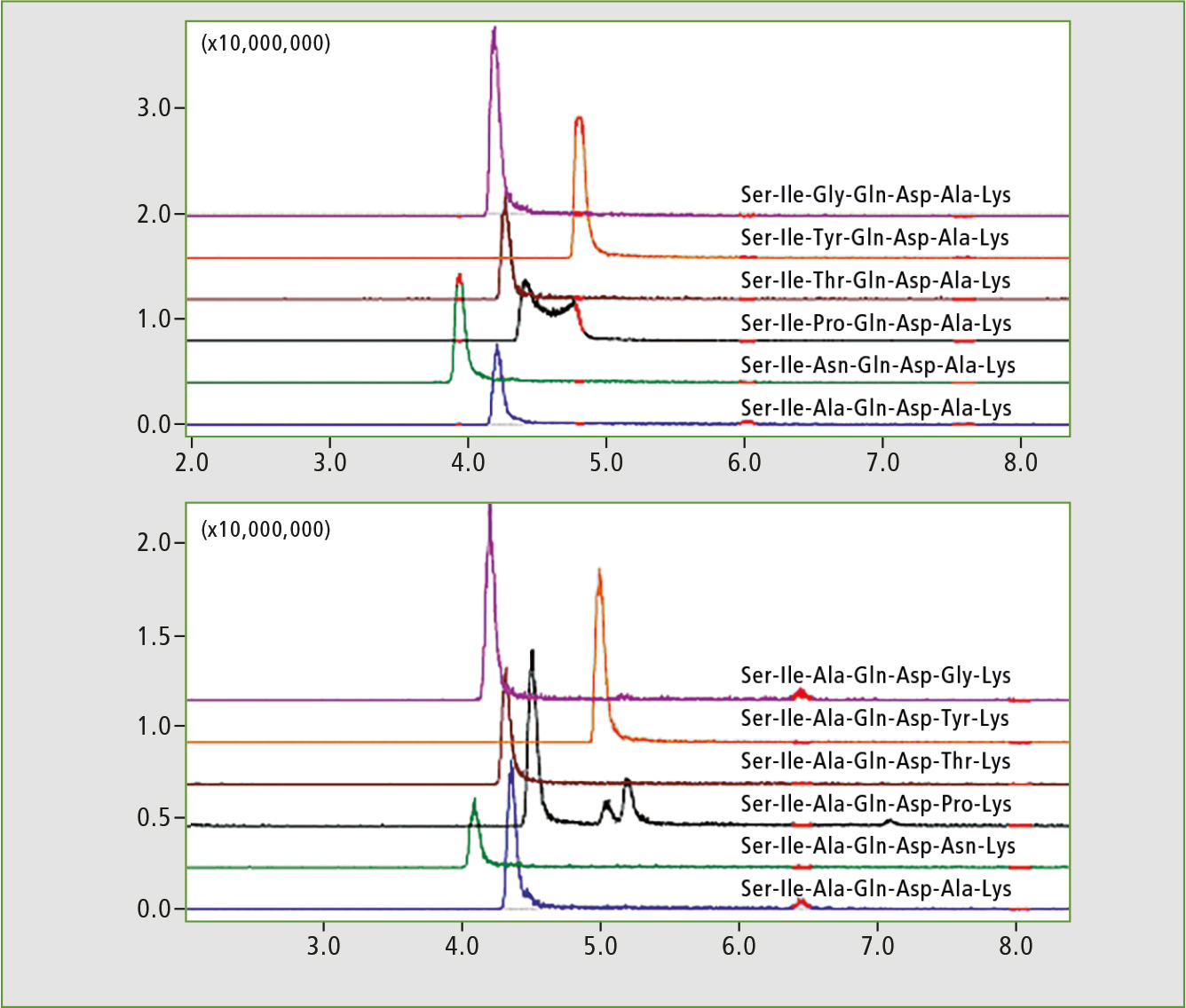 The researchers subjected the subset libraries to MS2 analysis using [M+2H]2+ peptide ions as precursors (figure 3). High mass stability of TOF allowed conducting of a long series of LC-MS experiments without recalibration. The parent ions in overlapping chromatographic peaks were successfully selected and fragmented due to high resolution and accuracy of the IT-TOF instrument. In practically all cases the fragmentation produced b2 and y5 ions, which are identical in pairs of isomeric peptides and cannot be used to assign the peaks in chromatogram of a mixture of libraries. Some observed differences were identified as +2 fragment ions (Thr and Pro peptides) or were rather weak (Gly analogue). 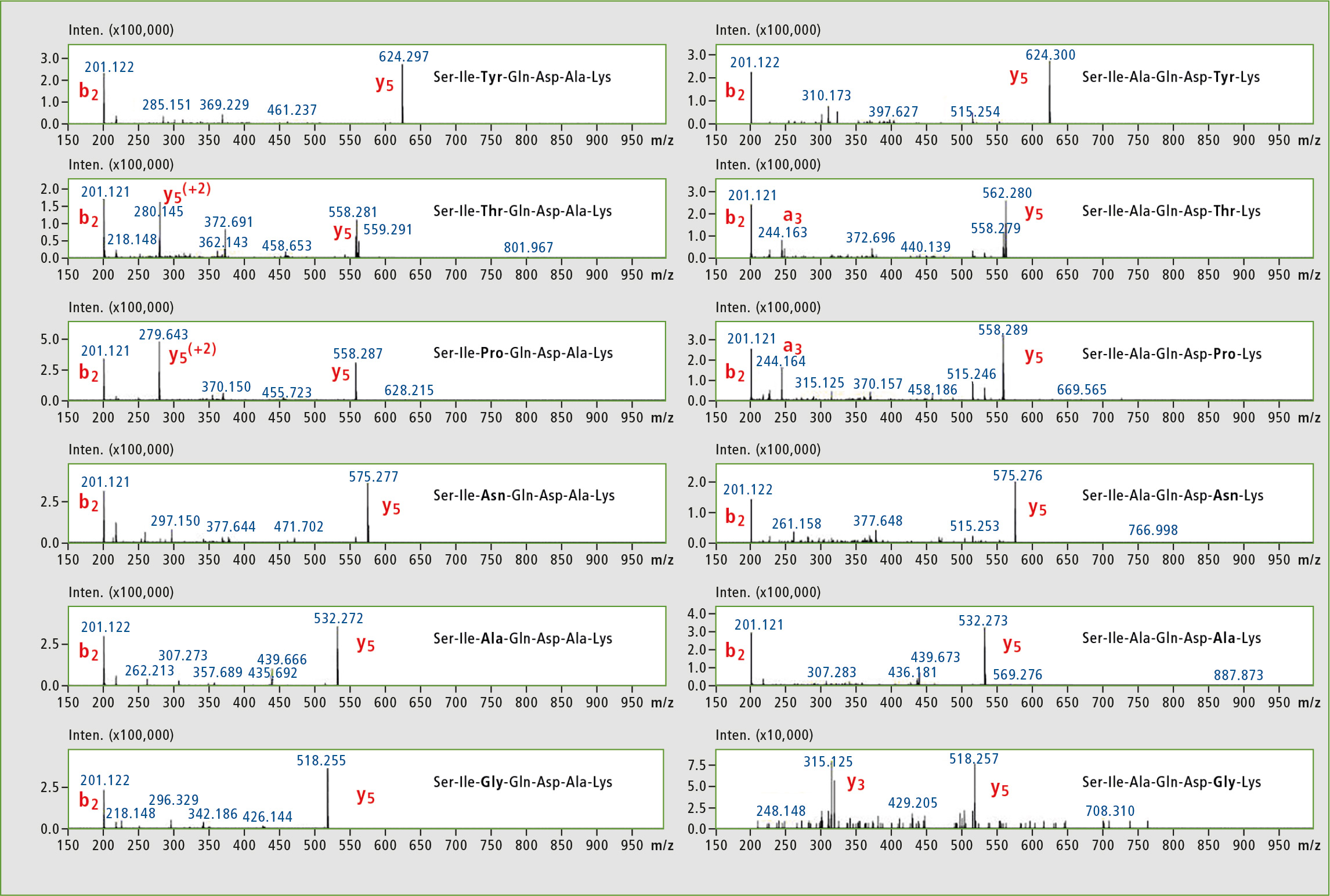 Analysis was performed using a Shimadzu IT-TOF instrument, and it was decided to use the MSn feature and subject the y5 ions to further fragmentation (MS3). The Tyr analogues were selected for preliminary studies, and the results shown in figure 4 reveal interesting differences in MS3 fragment patterns. The characteristic MS3 transitions will be used in further lipophilicity studies of podocin fragment peptide libraries. 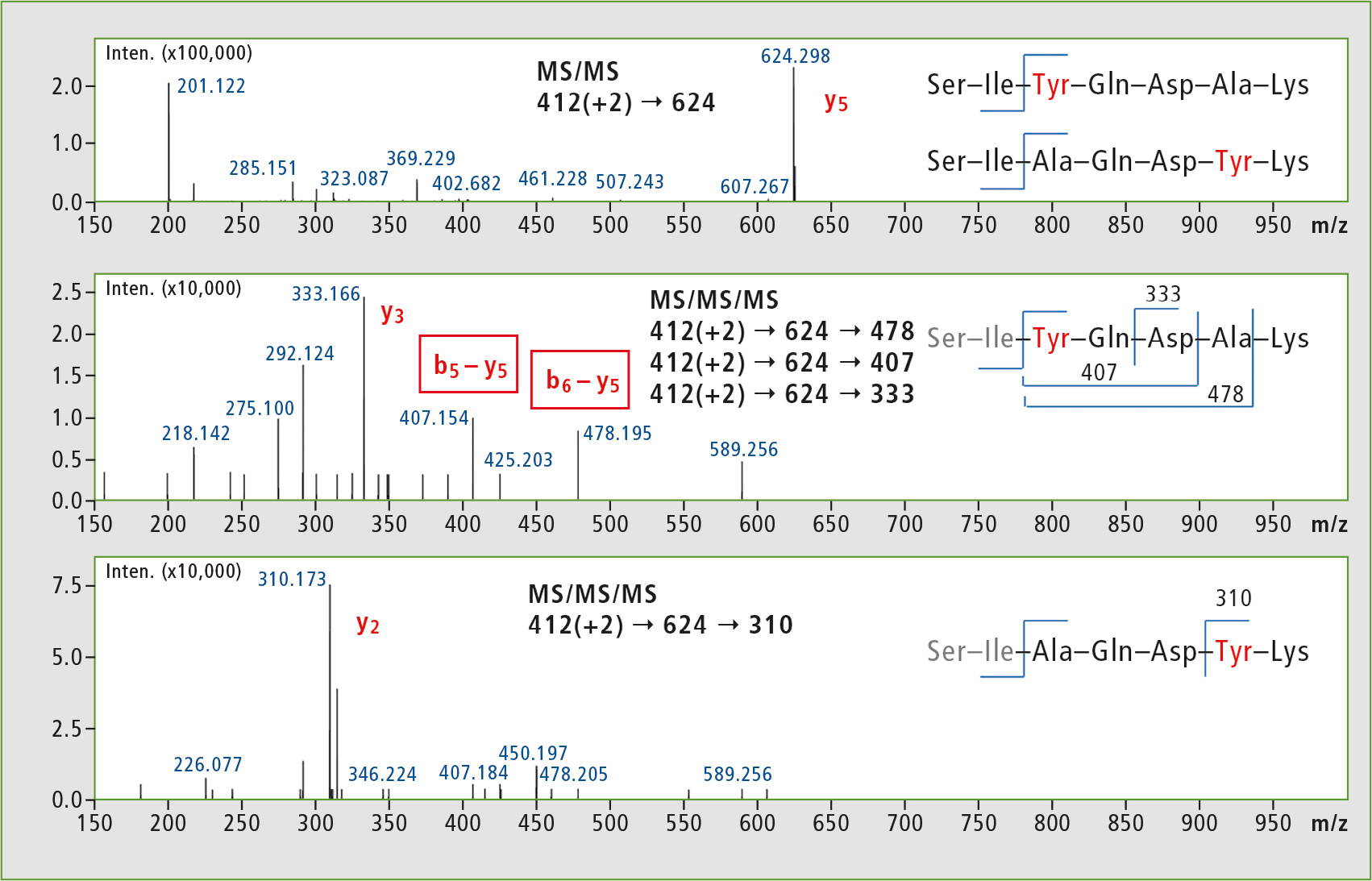 Figure 4: MSn analysis of Tyr-containing library elements. MS2 results were not sufficient to produce characteristic ions, whereas MS3 experiments could be used to unambiguously identify the isomers.

Based on individual properties of the peptide sequence studied, regular MS2 experiments could not confirm which Ala residue was replaced in a given peptide. The isomeric peptides could be identified only after obtaining deeper insight into their fragmentation using MS3 function of the IT-TOF instrument.

Scientific challenges could be solved quickly, successfully and efficiently due to the MSn capability and high mass accuracy of the Shimadzu LCMS-IT-TOF instrument.

Pyrylium salt synthesis: Syn­thesis of pyrylium salts involves two steps. The first step involves synthesis of a specific chalcone based on condensation reaction with different commercially available aldehydes and ketones. The reaction is carried out in alkaline environment, in the presence of 10 % NaOH in ethanol. In the second step, cyclization reaction is performed with obtained chalcone and proper ketone. The reaction requires the presence of trifluoromethanesulfonic acid (TFMSA) as a counterion.

Derivatization procedure: Sample of model peptide was dissolved in dimethylformamide (DMF) and excess proper pyrylium salt and trimethylamine (TEA) was added. The mixture was incubated at 60 °C for three hours. After this time, solvent was evaporated under nitrogen and the residue was lyophilized.

Peptide library synthesis was performed on solid support using Fmoc chemistry, and equimolar mixtures of peptide derivatives were used at diversity steps. Crude products were applied in the LC-MS experiments.

MS and MSn experiments: MS and MSn was performed on a Shimadzu IT-TOF mass spectrometer. For the experiments using precursor ion mode, a fragment ion corresponding to pyridinium was chosen. 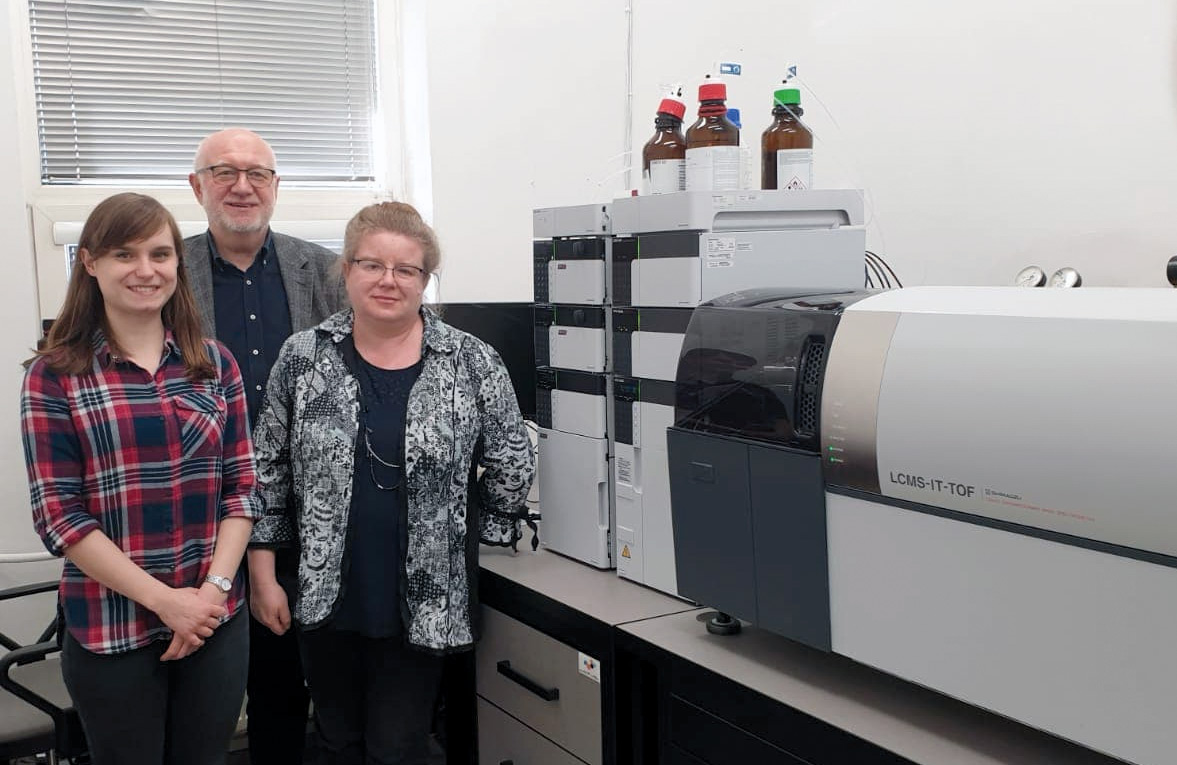