When the days are getting shorter, it is the time to create a warm and nice atmosphere and light some candles. Cosiness, flickering lights, a pleasant glow. But what are the candles made of? Their raw materials are beeswax, paraffin or stearin, which can also be mixed.

The content of beeswax in candles is an important quality criterion often used in marketing as a sales reason. Already in the Middle Ages during the time of the Hanseatic League, the quality of beeswax was controlled after counterfeited products emerged. Due to its high price, beeswax today is often replaced by cheaper alternatives, e.g. petroleum-like paraffin wax.

Stearin is seen as a renewable and therefore green alternative to paraffin, as it is made of plant materials. The remains of stearin candles can be composted. To check product authenticity and marketing claims, the main components of beeswax and stearin can be detected analytically due to the characteristic profile of wax compounds produced by bees or plants.

Shimadzu has developed a new surface-assisted laser desorption/ionization mass spectrometry (SALDI-MS) method that is very fast and easy-to-use (figure 1): Wax can be applied directly from the candle on the silver substrate and analyzed using the MALDI-8020 benchtop mass-spectrometer. Due to its wide range of applications, it can also be used for lipids.

No time-consuming dissolving step or chromatographic separation of the sample is necessary. The new eMSTAT statistical software helps to determine main components of the candle wax so that even people without deeper analytical knowledge can execute the analysis.

For etched silver substrates, silver foil was cut, washed with pentane, acetone, methanol and water, flattened and etched in nitric acid (23 %) at 50 ºC until the surface appearance changed to grey. Finally, substrates were washed with water and fixed with conductive tape on a MALDI target [1, 2]. The nano-structured surface replaces the matrix, and matrix-assisted LDI (MALDI) becomes surface-assisted LDI (SALDI).

The fast sample stage and short pump time of the MALDI-8020 (figure 2) make the instrument especially suitable for high throughput analysis and method development. Due to its benchtop design, it provides outstanding performance parameters. With a compact footprint, it needs just a small space in the lab. 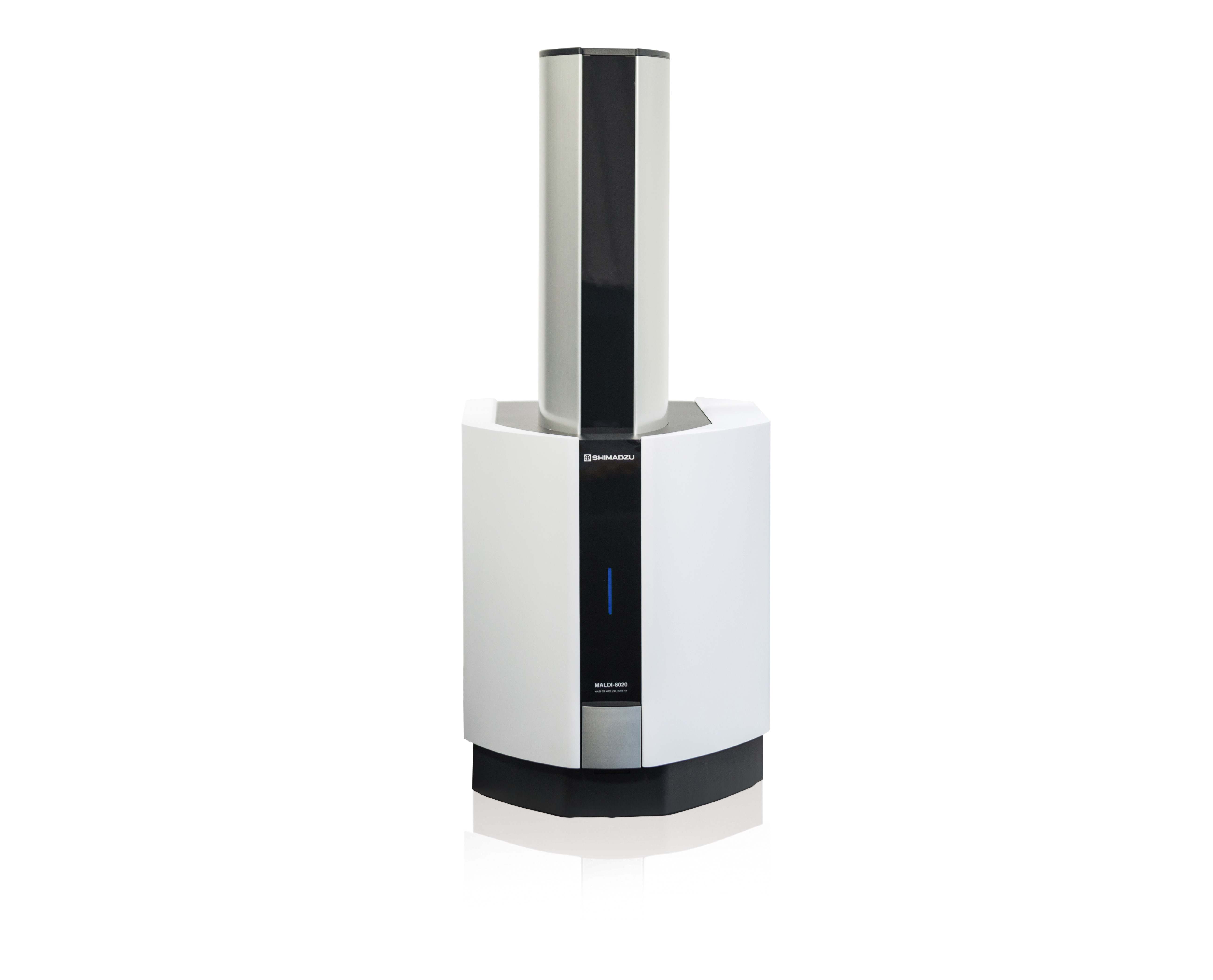 Figure 2: The linear benchtop mass spectrometer MALDI-8020 shows a great performance on a minimum footprint. Typical applications for the MALDI-8020 are the analysis of proteins/peptides, lipids, or hydrocarbons in life science or quality control of polymers.

The compounds of candles are detected as Ag+-adducts. Due to the natural abundance of silver, the spectrum shows duplets with almost identical signal heights. The range of lipid classes that can be observed by this method even covers alkanes, although these fully saturated hydrocarbons do not have any functional group.

To characterize the method, a GC-standard of alkanes with different chain-lengths was analyzed. Their detection is limited only by the vapor pressure of these volatile compounds. Alkanes with 23 or more carbon atoms can be detected. Even shorter chain-lengths are observable in some spectra, if the sample is analyzed directly after introduction into the vacuum of the mass spectrometer (figure 3).

Profiles of beeswax, stearin and paraffin

Stearin candles are made of vegetable or animal fat after saponification. They show a characteristic profile dominated by two free fatty acids (FFA): Palmitic and Stearic acid (figure 4b).

Paraffin is the cheapest and therefore most common resource for production of candles. Due to their origin in petroleum, alkanes with all different chain lengths of the fraction used are present in the mass spectrum (figure 4c). 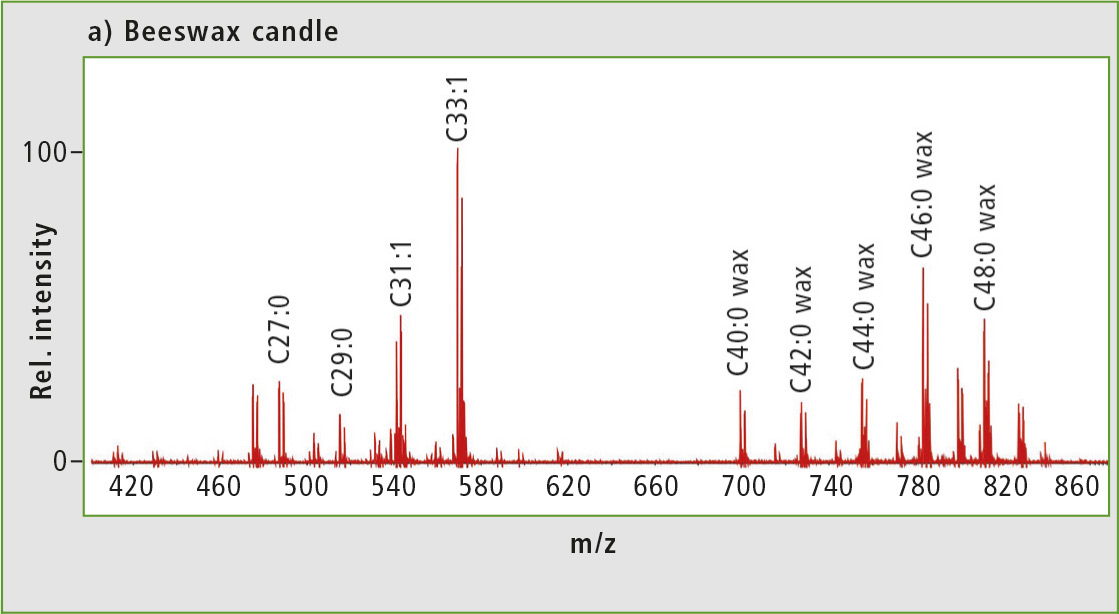 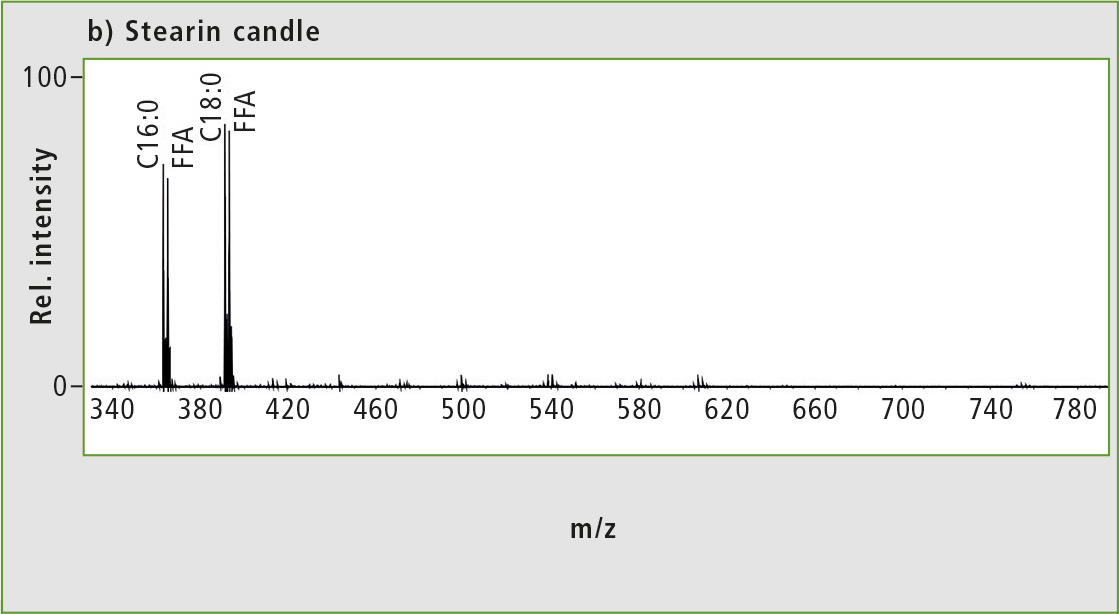 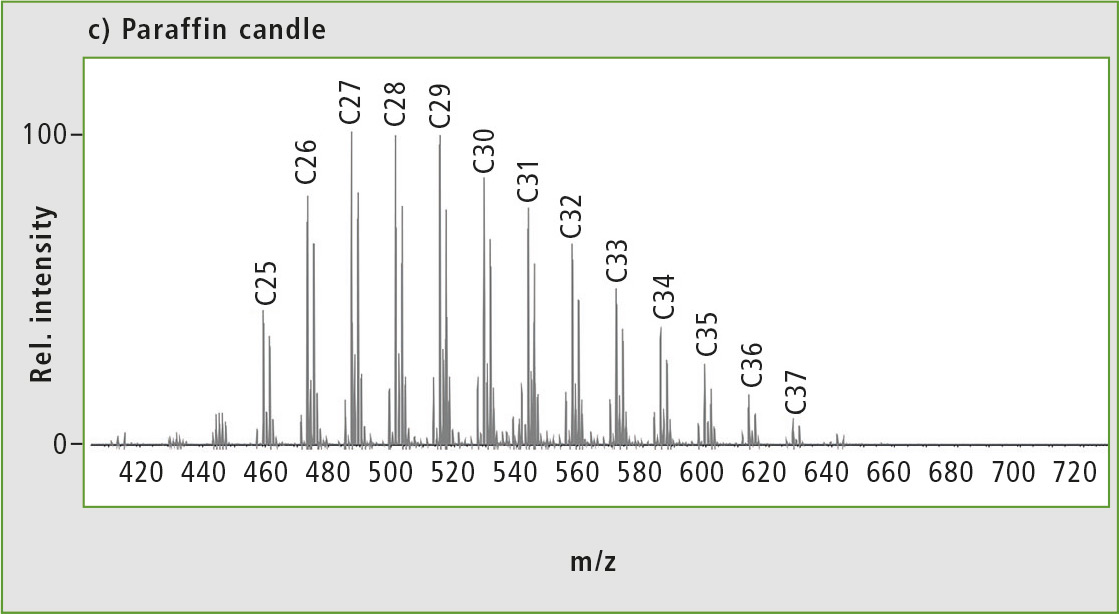 These three examples show the large range of different lipid classes that can be analyzed with SALDI-MS using etched silver foil as substrate:

Alkanes without any functional group which are analyzed classically via GC and
more polar and less volatile lipids like FFA and wax esters that are therefore commonly not recommended to be analyzed via GC without derivatization.

As no chromatographic separation is necessary, the SALDI-MS method is much faster.

The eMSTAT statistical software helps to evaluate MALDI, DPiMS and other full scan data sets. In Statistical Analysis mode, it is easy to differentiate samples and identify marker peaks with the implemented univariate and multivariate analysis tools. For example, the score plot visualizes the groups of similar samples (figure 5). These discoveries can be used in Discriminant Analysis mode to assign unknown samples. A score is given to rate the similarity to the reference data. In this way, even people with limited analytical knowledge can perform the analysis. 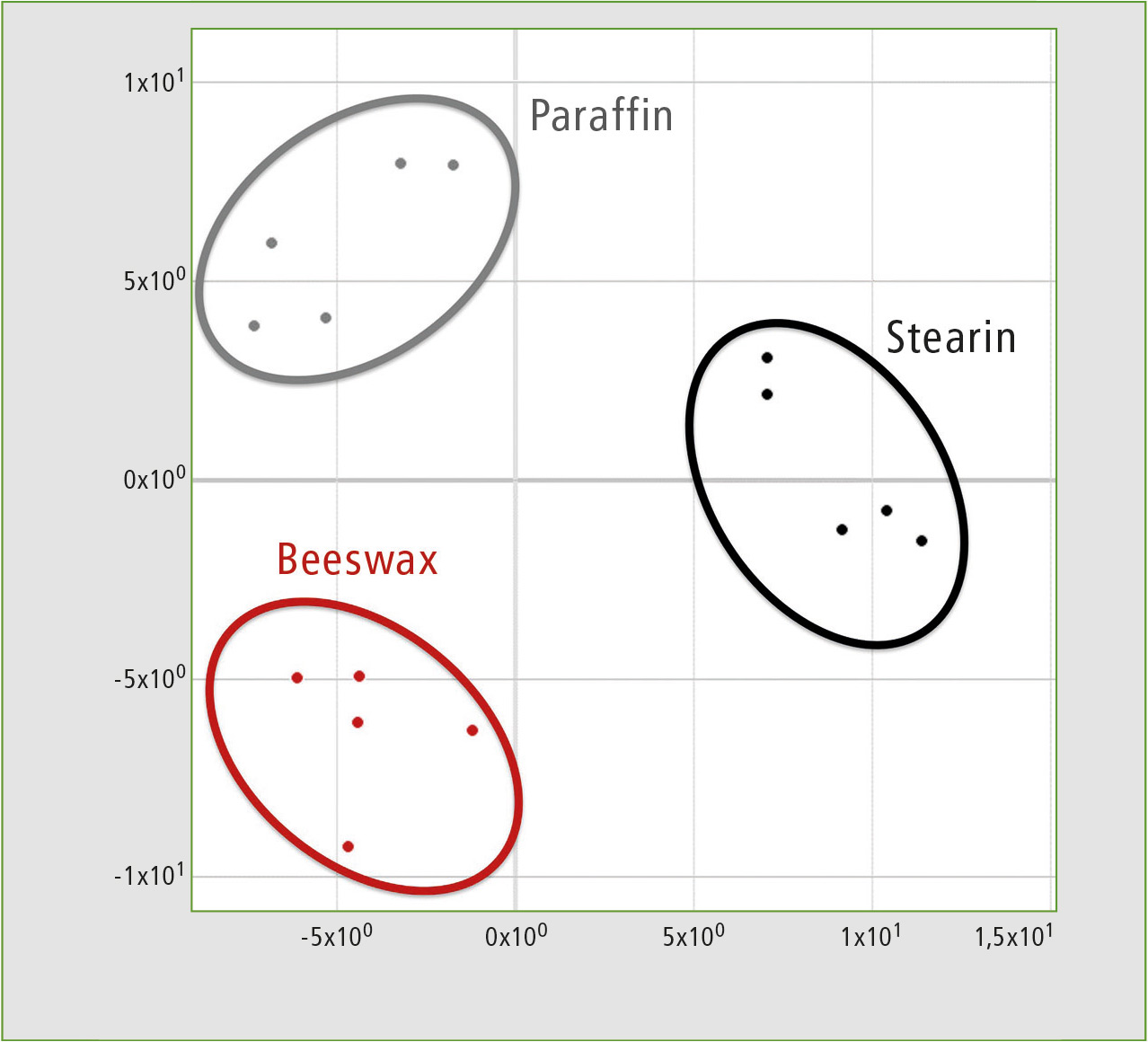 Finding marker peaks to differentiate food, plant or other biological samples or to monitor the quality of polymers after identifying typical degradation products are just a few examples of the extensive number of eMSTAT applications.

The characterization of candle waxes shows the potential of SALDI-MS as a high-speed screening method for complex lipid mixtures. SALDI-MS with etched silver substrates can be used to analyze typical GC-MS analytes such as alkanes as well as less volatile lipids with polar functional groups such as waxes or free fatty acids. Analysis time is saved because no derivatization or chromatographic separation is necessary. In addition, pump time of MALDI-8020 is decreased and the speed of the sample stage is increased compared to previous instruments.