Plastic packaging, plastic waste, microplastic and environmental protection – the pollution of nature and the seas by plastic is one of the top issues in the press. Plastic doesn’t rot or decay; it takes decades or centuries before it is decomposed by nature.

Among other things, PET, a versatile plastic, is used to make beverage bottles. Despite strong recycling efforts, production has increased from 40 to 56 million tons (2008-16) [1]. That the sturdy polymer-based beverage bottles are made of polyethylene terephthalate (PET) can be read on the bottles. The symbol for PET in recycling is a clearly written ‘PET’ in the recycling symbol or a ‘1’ in the recycling triangle. This substance can be recycled as waste.

In order to appear more environmentally friendly, alternative plastics from natural basic substances are also used, such as PLA, a plastic based on polylactic acid. However, it does not have the same flexibility as PET in terms of its physical properties (stability, bottles, boxes and foils etc.) PLA used in food applications has up to now been rather stiff and brittle. It can be found in disposable dishes and disposable cups, but it is also used in 3D printers for printing.

It is questionable when about 25 % of a beverage bottle is made from naturally renewable raw materials but is then declared to be 100 % recyclable. To solve this puzzle, FTIR spectroscopy was used because a PET label was found on the beverage bottle.

FTIR spectroscopy allows the substances to be identified. A Shimadzu IRSpirit-T equipped with a diamond-based QATR-S single-reflection unit was used for the analysis. This is possible because the polymers react to heat and the molecular groups of these chemical compounds vibrate.

PET bottles are made of A/C PET. Depending on the wall thickness (soft or hard polymer) and application, PET can contain more amorphous (A-PET) and less crystalline (C-PET) PET or vice versa. The two versions have different FTIR spectra.

Even the PET bottles themselves, which are available on the market, show different ratios of proportions of A- and C-PET. They are also unevenly distributed over the entire bottle body.

The PET variants are usually not the same on the outside, inside or at the bottleneck. The reason is that PET reacts to heat forming with crystallization [2]. The infrared spectrum is further influenced by the arrangement of the molecular structures in the PET and by the manufacturing process of PET as a polymer. This article focuses on PET as A/C PET.

In a separate screening of packaging material, various PET bottles for beverages from Europe and Japan were analyzed. For comparison, 9 samples were used (table 1). In all investigations of PET bottles, a higher proportion of A-PET was found on the outer wall and more of C-PET on the inner wall. 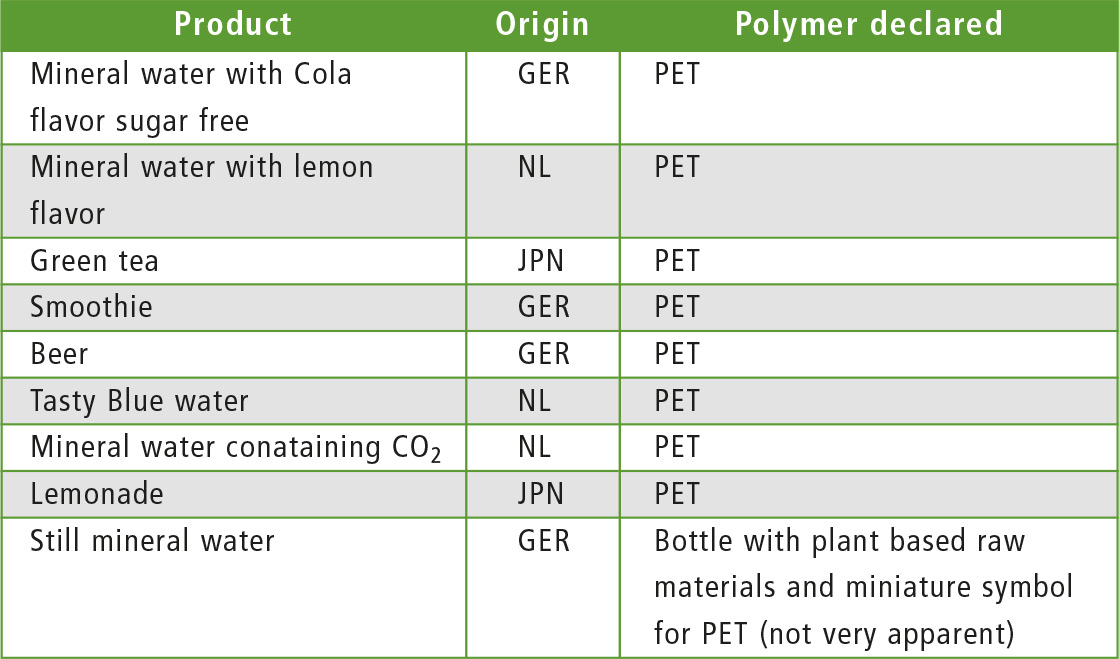 Table 1: Transparent PET bottles collected after use and examined using ATR infrared spectroscopy. All but one bottle were labeled as polymers of recycling category 01 for PET.

Pure A-PET is rarely found in bottles, which is probably in the nature of PET. Likewise pure C-PET does not exist either (maximum proportion of crystallization is about 75 % [2] [3]). A typical infrared spectrum of these bottles is shown in figure 1. The focus is on the signals at about 1,410 and 1,340 cm-1. Depending on the proportion, the signal at 1,340 cm-1 (closer to C-PET) is higher than the signal at 1,410 cm-1 (closer to A-PET). Furthermore, shifts of the -CH and CH2 groups take place, which is evident in the region around 2,900 cm-1 (figure 2). 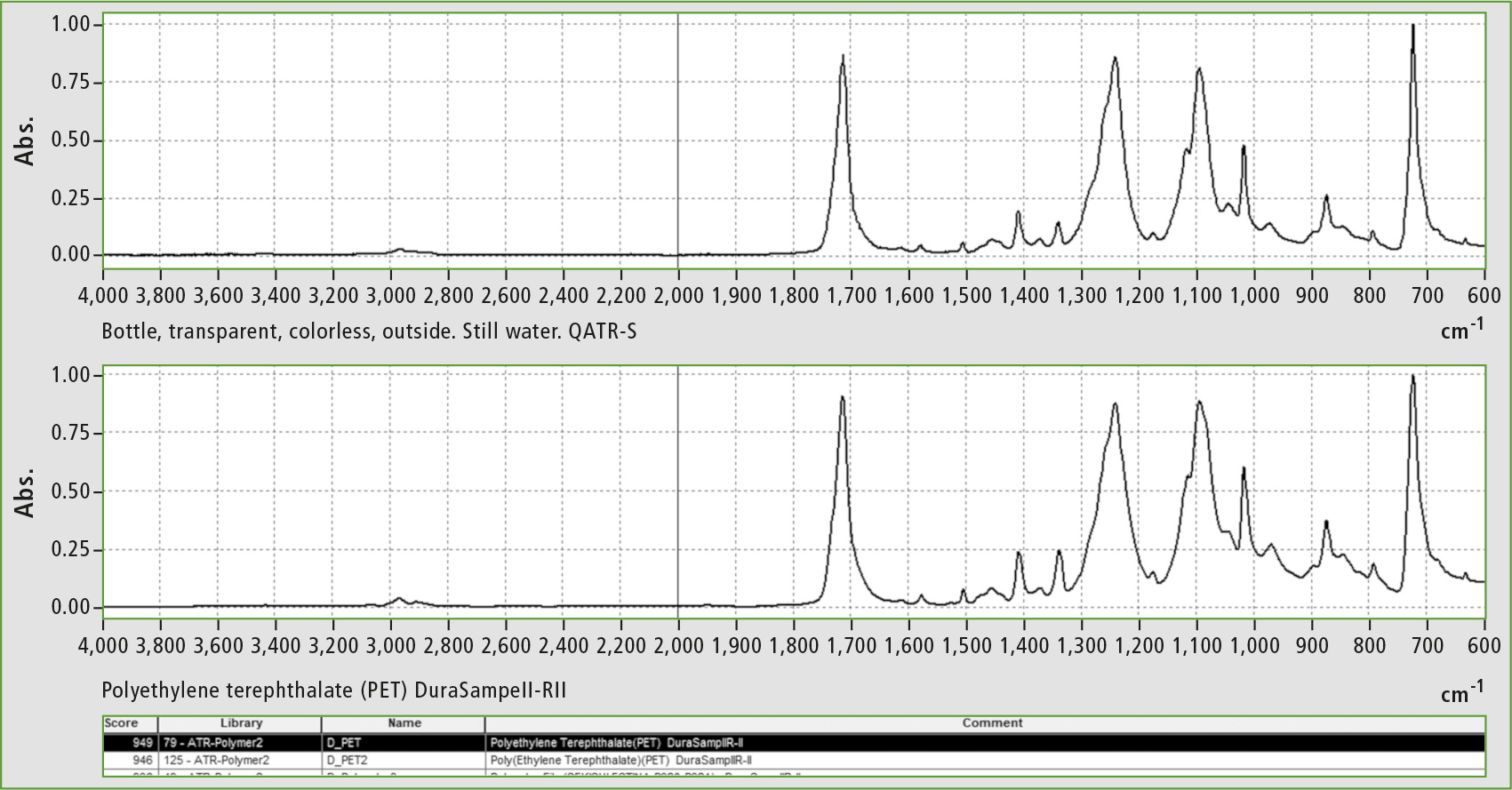 Figure 1: PET spectrum of the plant based raw material bottle identified by the infrared spectrum search in polymer libraries; best hit was found in the ATR polymer library. 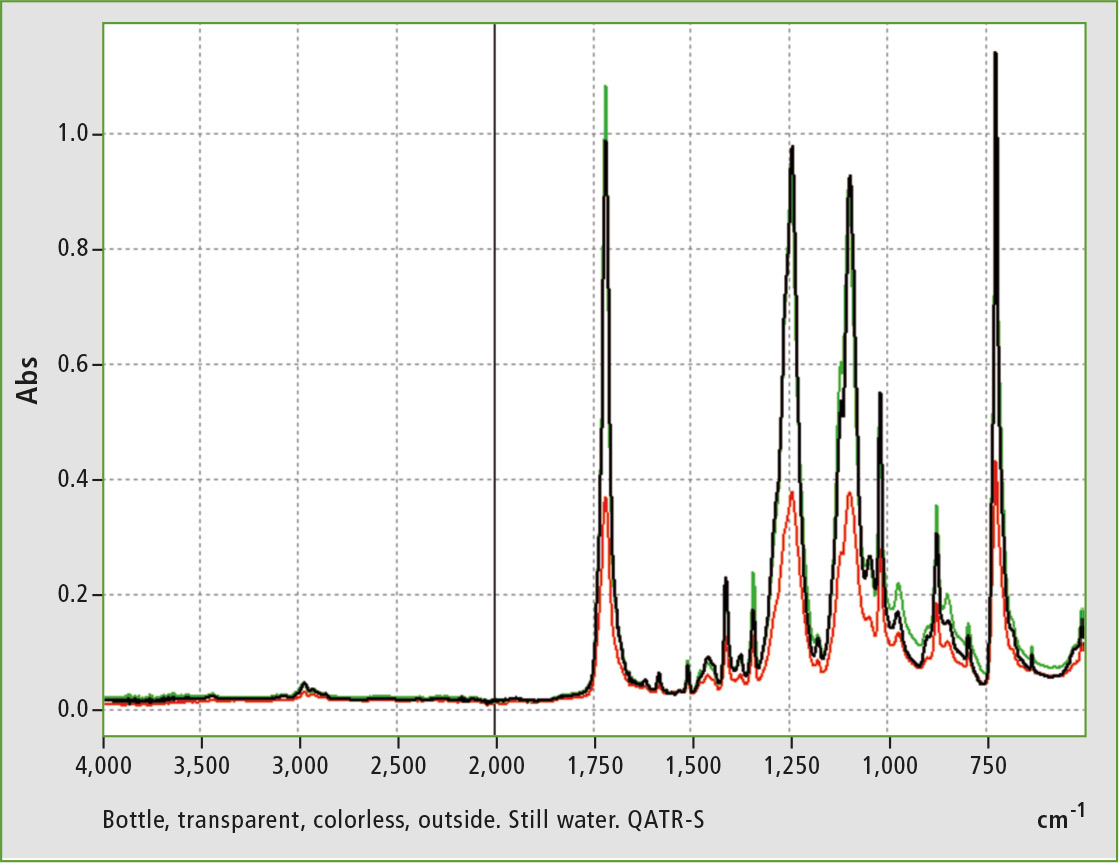 Figure 2: Infrared spectra of a PET-based bottle with the plant based raw materials for still water: Inner wall (green line), outer wall (black line) and a spectrum from the middle (red line) of the bottle wall.

In addition to ‘standard bottles’, a bottle claiming to be partly made of plant material was also investigated. The bottle wall was cut open and analyzed from both sides using the ATR technique. As the infrared beam enters the surface only to a depth of about 2 µm, the wall was examined in three different ways: inside, in the middle and outside. PET could be found in all three layers. The analysis results of the sample allow better assignment of the signal groups to the PET variants.

The spectra clearly show the different degrees of crystallization of PET. Inner wall and outer wall show differences. The spectrum of the middle layer is the result of the outer and inner wall. After superposition, addition of the two outer surfaces shows approximately the nature of the middle layer (figures 2 to 4). 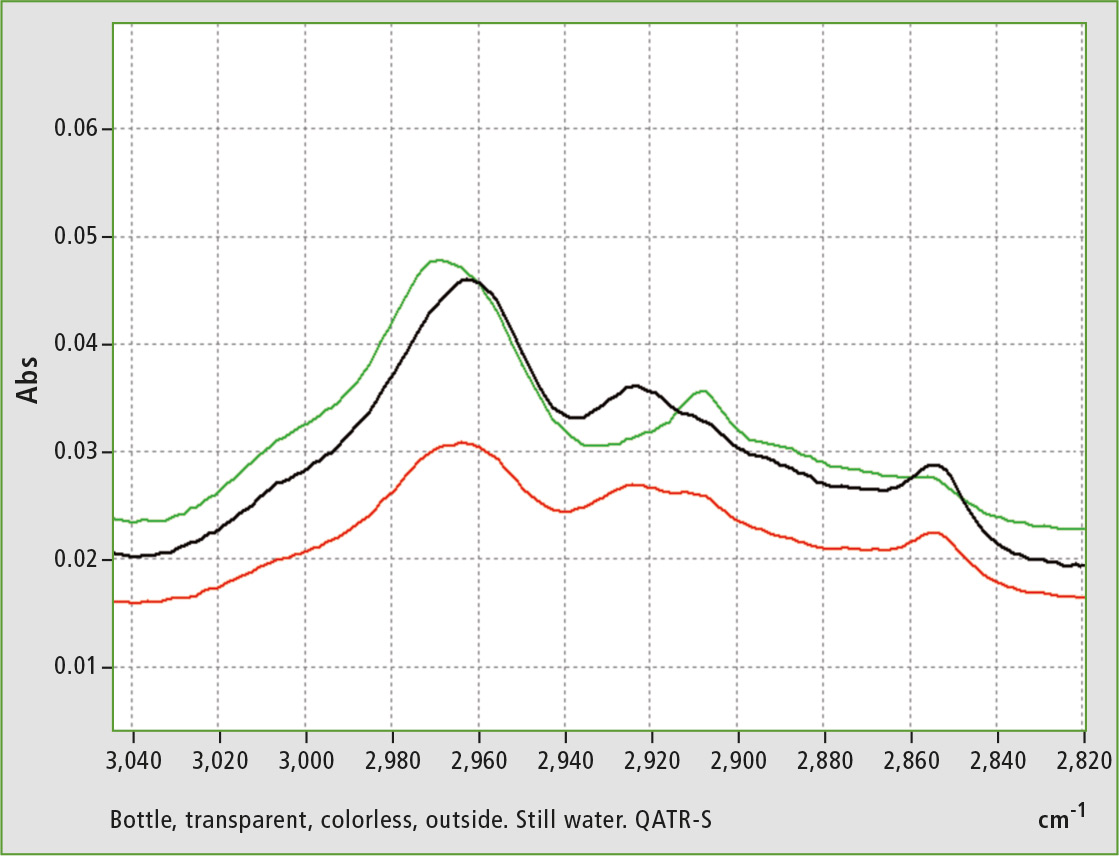 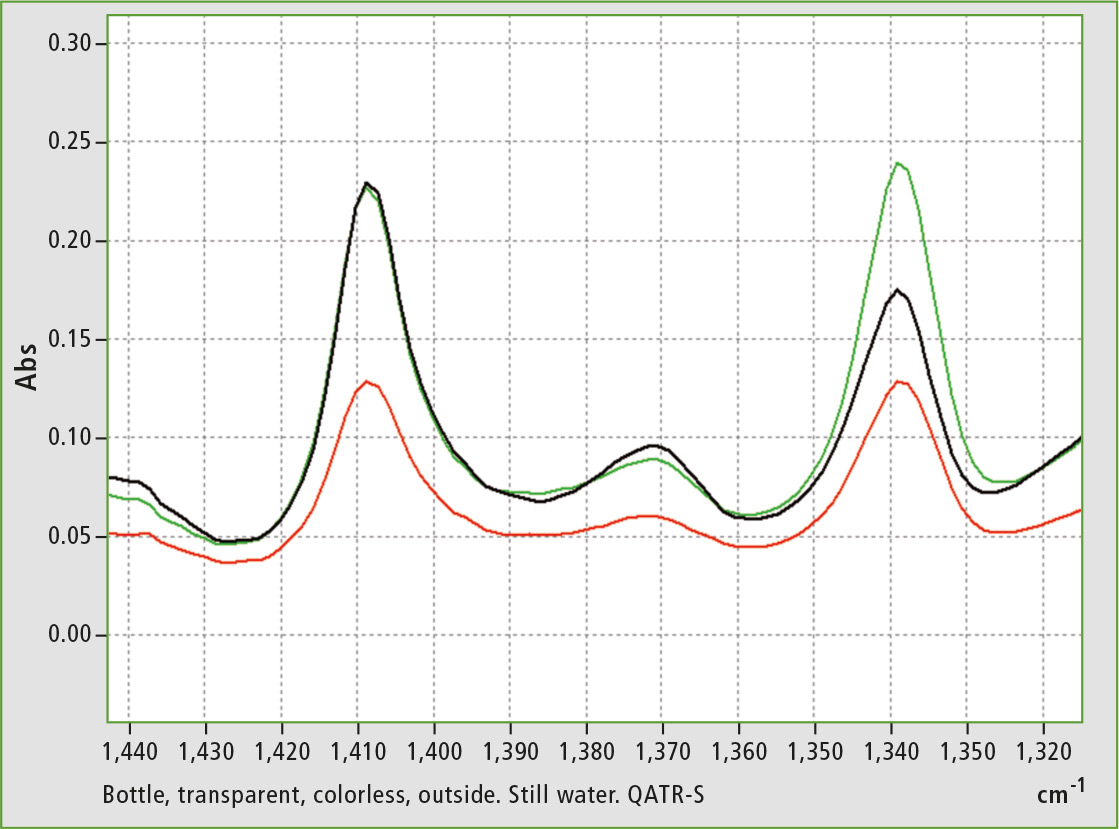 The actual analysis was meant for the bottle containing plant based raw materials (counter 9 in table 1). Using the library search, it has been identified as PET (figure 1). On the bottle, PET is declared in miniature figure, which was produced up to 22.5 % from renewable raw materials. Is this a paradox on first glance? The solution to the puzzle lies in the development of the starting products for the production of PET, which is produced, for example, from the monomers ethylene glycol and terephthalic acid. According to the manufacturer and readable on the Internet, the PET raw material ethylene glycol is obtained from cane sugar. At this point, plants from nature meet production of a technical material such as PET, which is one of the polymers that can be recycled easily and well after usage.

Bio-plastics are becoming more and more important to the industry, and alternatives to sugar cane are being researched, such as plants that are available worldwide. Nevertheless, the way to 100 percent organic plastic bottles still seems far away. [4]