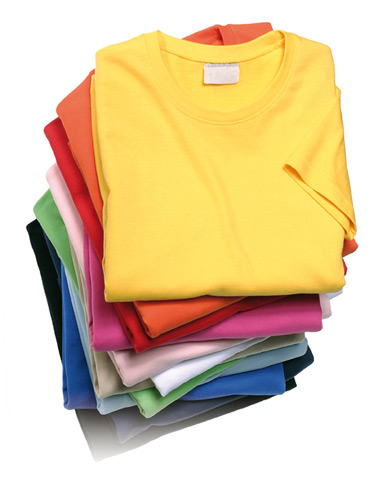 There is hardly anything that we allow as close to our body as our clothing. It protects us against cold, moisture or the sun. We choose our clothing carefully and wear it next to our skin, and children often like to put pieces of clothing into their mouths.

Many different chemicals are used in textiles and clothing production. These chemicals have specific properties such as vivid colors, wind and moisture impermeability, antibacterial effects, crease resistance and much more.

In the manufacture of clothing, the number of additives and finishing agents is vast. Nearly 6,000 preparations are available, e.g. refinement agents for fibers and yarns such as bleaching or hydrophilic agents for pretreatment, additives for dyeing and printing, as well as dispersing agents, protective colloids, dye accelerators, oxidation, mordant or resist agents. The list appears to be endless. Additive chemicals are used as optical brighteners (optical white) or to reduce creasing and shrinking. They are used as stiffening agents, anti-electrostatics, water and oil repellents, protection against pests, flame retardants and antimicrobial agents. In total, these preparations include about 600 different chemical compounds, whereby dyes are not yet taken into account.

Children are considered to be particularly at risk in their mental development. A multitude of compounds can potentially harm the brain, but they are neither regulated nor tested for harmful effects on fetuses and children. Experts are calling for better protection of children from the effects of toxic chemicals, the so-called ‘silent epidemic’ [1].

The European Textile Labelling Regulation merely requires that information is provided on the textile fibers used. Labelling of the additives used is, however, not yet required. Textiles are considered to be commodities, and in this case the general prohibition applies that the manufacture and treatment of commodities must not be harmful to human health. Compliance with the legal provisions is primarily the responsibility of the manufacturer. Monitoring of compliance with the legal provisions is the responsibility of the federal states. Since there is no mandatory authorization or reporting requirement for textiles – only information on the fibers used is required – there is no comprehensive knowledge of potential risks [2].

Experts and consumer organizations have long been demanding a precise declaration of ‘ingredients.’ However, some harmful substances are already prohibited in clothing, such as carcinogenic azo dyes or certain flame retardants. A labelling requirement applies to formaldehyde and a maximum concentration of 5 mg/kg textile applies to pentachlorophenol in accordance with the German Chemicals Prohibition Ordinance. However, these are only specific legal provisions. Unlike, for example, cosmetic products, there is no standardized, comprehensive regulation for textiles or leather.

Over 90 million tons of textile fibers were produced in 2015, a large proportion of which in countries that do not adequately regulate the use of harmful substances. This is a huge problem. The textiles produced are contaminated with harmful substances, and the release of these harmful substances into the environment is immense. The majority of the chemicals used for finishing are transferred untreated into rivers, and sooner or later will enter the drinking water and food chains.

PFCs also get into foods

Just how far-reaching the input of chemicals into the environment can be, is shown by example of the so-called PFCs (perfluorinated and polyfluorinated chemicals). This substance group includes more than 800 compounds which do not occur naturally. Due to their outstanding water, oil and dirt repellant properties, PFCs are often used in the production of home textiles such as carpets, curtains, table cloths and pillow cases as well as upholstered furniture. PFCs are found in virtually all rainproof, breathable outdoor textiles, they are used as anti-grease ingredient in coated paper such as paper cups or pizza boxes, or as non-stick coating in Teflon pans.

The problem is: PFCs are extremely stable. They do not degrade in the environment but are only distributed. In 2015, a Greenpeace expedition found PFCs in all snow and water samples collected from seemingly untouched and remote locations around the world (among others, in China at an altitude of 5,000 meters and in a Chilean national park).

Persistent harmful substances are distributed via the air and flowing waters throughout the world and finally also reach our food. They accumulate in the body, bind to proteins in blood, liver and kidneys and can be passed on to the fetus or the baby during pregnancy.

Because of these alarming properties, consumer protection and environmental organizations are focusing on PFCs. The most prominent representatives are the perfluorooctane sulfonic acid (PFOS) and the perfluorooctanoic acid (PFOA), both of which are likely to be carcinogenic.

While the use of PFOS and its components is already prohibited as a substance in goods in the EU REACH Chemicals Regulation, PFOA is still on the list of candidates. Unintentional trace impurities are exempted and for textiles there is a threshold of 1 µg/m2 of the coated material. A fast and sensitive method for testing textile samples is presented below.

Figure 1 shows the MRM chromatogram of a PFC standard in a textile matrix with 26 components, including 13C-PFOA (= M-PFOA) as internal standard. The measurements were performed using the LCMS-8050 triple quadrupole mass spectrometer coupled to a Nexera UHPLC. Separation of the compounds was achieved in less than twelve minutes with an excellent limit of detection for PFOS (LOD = 5.3 pg/mL) and PFOA (LOD = 5.8 pg/mL). Further important statistic features of the method are listed in table 1. (Detailed information on the methods can be downloaded via the QR code at the end of the article.) 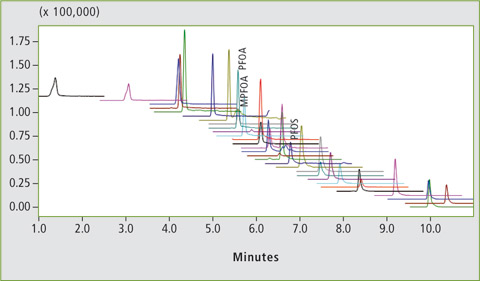 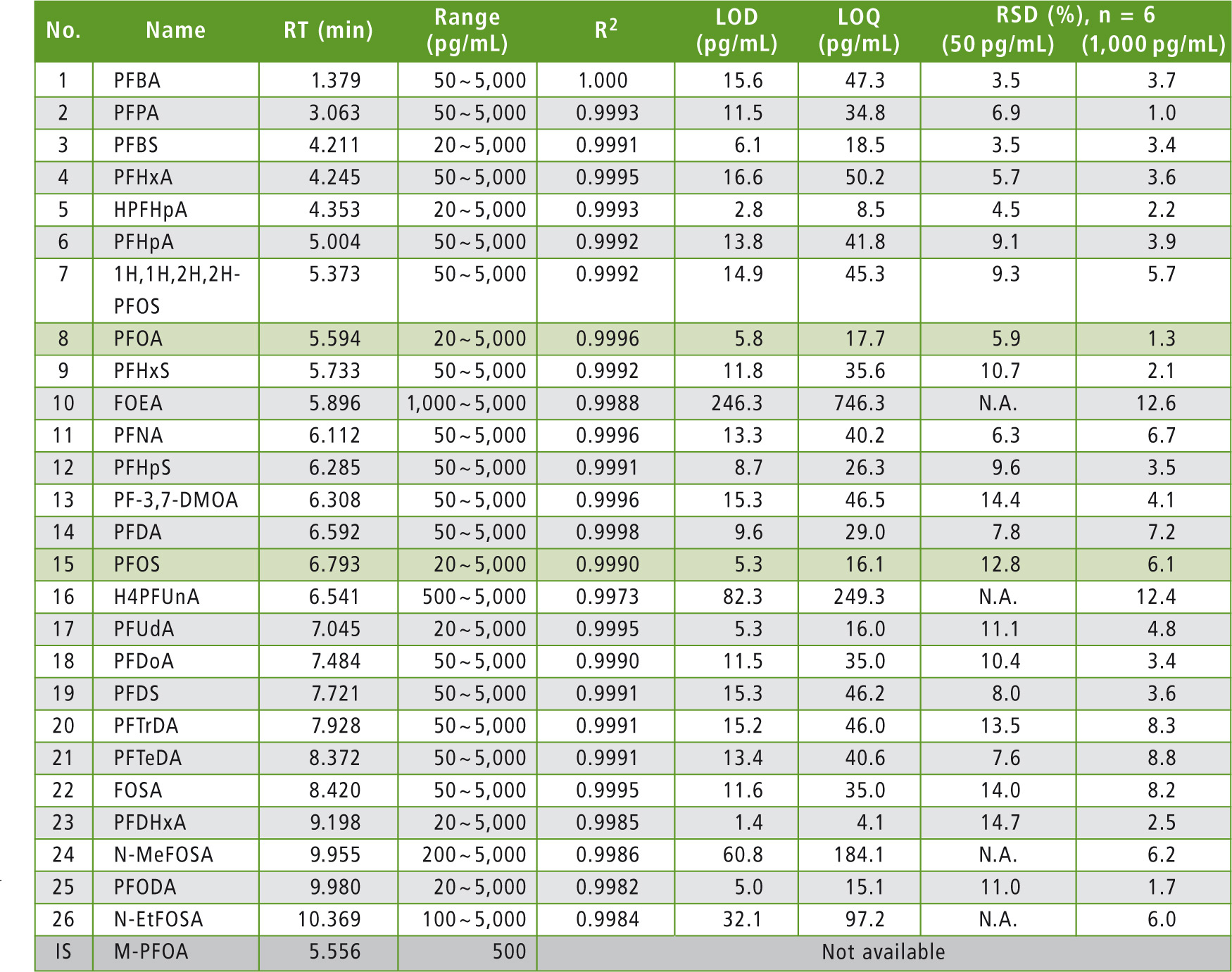 Table 1: Limits of detection and quantification for 26 PFCs, including PFOS, PFOA, as well as reproducibility data (n = 6) for the concentration levels 50 pg/mL and 1,000 pg/mL

PFC concentrations in five different articles of clothing (designated as BS, GS, YS, WS and BR) from local stores were determined using the method described. As shown in figure 2, traces of PFOA (650 pg/g = 0.65 ppb) were only found in sample GS. None of the 26 PFC compounds could be detected in the other four samples.

Figure 2: MRM Chromatogram of a methanol extract of the textile GS with internal standard (M-PFOA, 500 pg/mL). Traces of PFOA could only be detected in this sample.

Dyes not only represent the largest group, they are also the most important group of substances used in textile manufacturing with regard to health risks. For the assessment of health aspects, a classification based on the dyeing process is helpful. Water soluble direct dyes are incorporated in the hollow spaces (cavities) of the fibers. Water soluble reactive dyes, in contrast, are firmly bound to the fiber by means of a covalent bond. These dyes are usually harmless because they are poorly absorbed by the skin.

Disperse dyes are lipophilic substances that are directly dissolved in the chemical fiber. For technical reasons, only small molecules with the addition of organic solvents (dye accelerators, carriers) are considered suitable as disperse dyes. In case of incorrect treatment like over-dyeing or incomplete removal of the carrier, health risks due to these lipophilic substances, some of which are readily absorbed via the skin, cannot be ruled out.

By far, the most important group of dyes are the azo dyes, about 500 of them are synthesized on the basis of carcinogenic amines. Even today, 150 of these compounds are still commercially available. Following absorption by the body, azo dyes can be cleaved enzymatically (for instance by intestinal bacteria, certain liver enzymes or skin bacteria) back into the original potentially carcinogenic amines.

The German industry already has given up the use of azo dyes for a long time which can cleave into carcinogenic aromatic amines. Imported textiles, however, may well contain such harmful dyes even though, as stated in the REACH regulation, no textiles treated with such dyes may be brought on the market if limit values of 30 mg/kg are exceeded.

In the literature, a total of 49 dyes are described as contact allergens in the context of textile-related contact allergies. About two-thirds of them are disperse dyes. In addition, the BfR (Federal Institute for Risk Assessment, Germany) specified eight disperse dyes several years ago, that should no longer be used in clothing textiles.

The following application example describes a method for quick and reliable detection of 47 dyes from different dye groups, 23 azo dyes, 21 disperse dyes and three triphenylmethane. These also include seven of the eight disperse dyes specified by the BfR (disperse blue 35, 106 and 124, disperse yellow 3, disperse orange 3 and 37/ 76; disperse red 1).

Separation of the 47 components is achieved within twelve minutes, as shown by the MRM chromatogram in figure 3. To develop the analytical method, a dye-free textile sample was spiked with the corresponding standard dyes and the instrument parameters were optimized. The measurements were performed using Shimadzu’s LCMS-8040 triple quadrupole mass spectrometer coupled to Shimadzu’s Nexera UHPLC. (A detailed description of the method can be downloaded via the QR code at the end of the article).

Figure 3: Chromatogram of MRM-traces of 47 dyes of different dye groups in one run (concentration 20 ng/mL (20 ppb) each; injection volume: 5 µL)

Table 2 lists the limits of detection and limits of determination as well as calibration linearity data and reproducibility measurements. 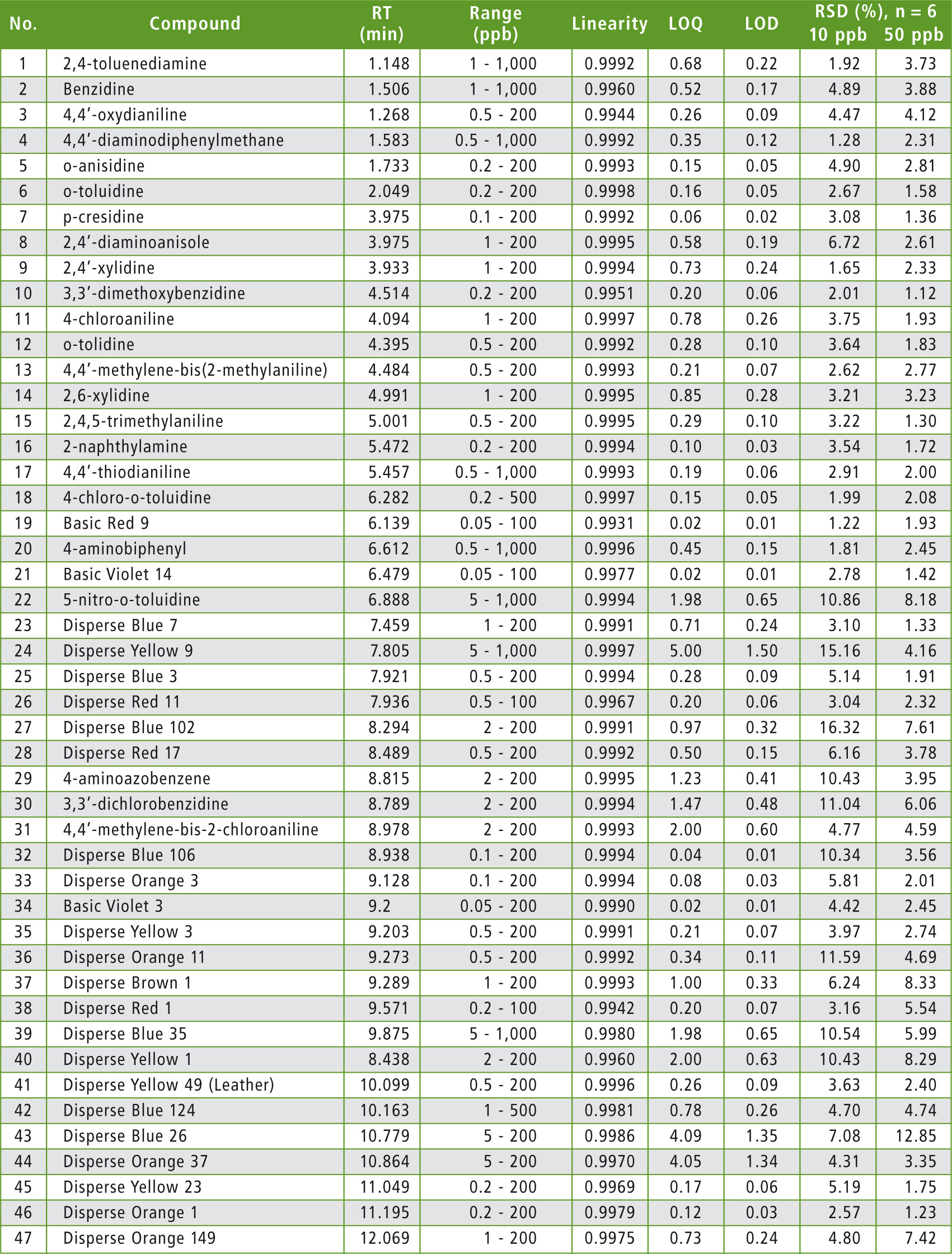 Table 2: Limits of detection and quantification for 47 dyes, as well as reproducibility data (n = 6) for the concentration levels 10 ppb and 50 ppb

A total of three light-colored articles of clothing, designated as 0B, 0G and 0Y, were purchased in local textile stores and analyzed using the method presented. One of the 47 dyes could be identified unequivocally in one of the three random samples: disperse red, which is regarded as a contact allergen belonging to the eight BfR banned dyes (figure 4). 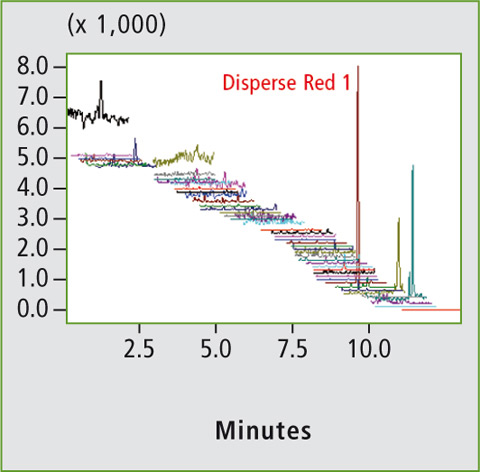 Figure 4: MRM Chromatogram of the real sample 0G with detection of the disperse dye ‘Disperse Red 1’

Fast and sensitive detection methods for harmful chemicals in textiles are necessary to enable random monitoring of, for instance, clothing. The introduction and monitoring of limit values not only serves to protect persons wearing the piece of clothing but also to support sustained protection of the environment. Even when some manufacturers are committed to stop the use of known harmful substances in clothing, contaminated clothes are still found in random samples collected by environmental and consumer organizations [3]. Using LC-MS/MS, even small traces of harmful substances can be determined accurately and quantitatively.