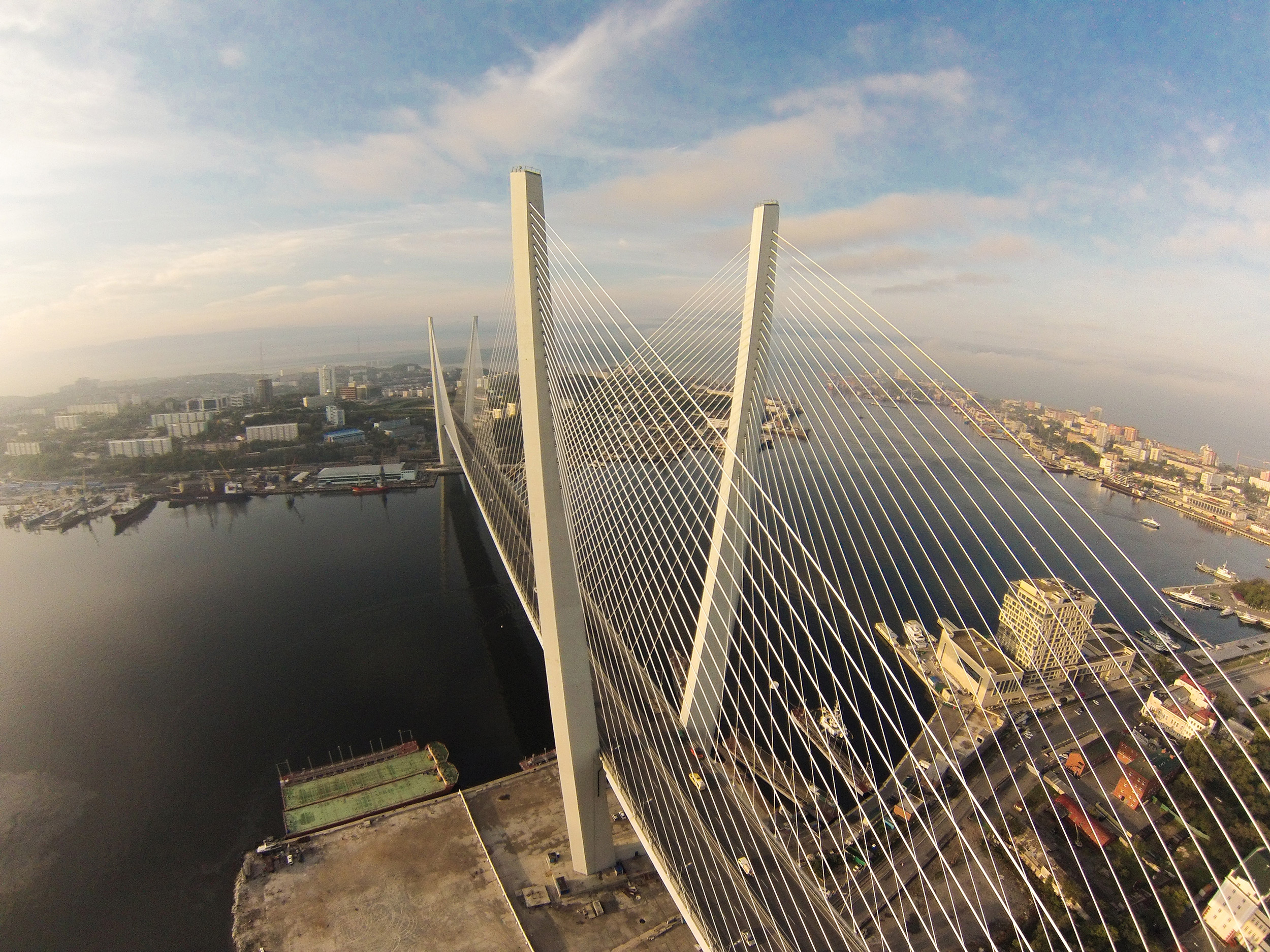 View from the Zolotoy Bridge in Vladivostok. The cable-stayed bridge was opened in July 2012 on the occasion of the asia-pacific economic summit (APEC).

The Center of Mechanical Tests and Material Structural Analysis was established as part of the university’s Engineering School. It consists of three departments: the Mechanical Tests Laboratory, Material Structural Analysis Laboratory and Sample Preparation Laboratory. The Center became a basis for scientific research as well as for special investigations required by different factories, plants etc. Highly qualified specialists from the university work in close cooperation with the representatives of many industries. 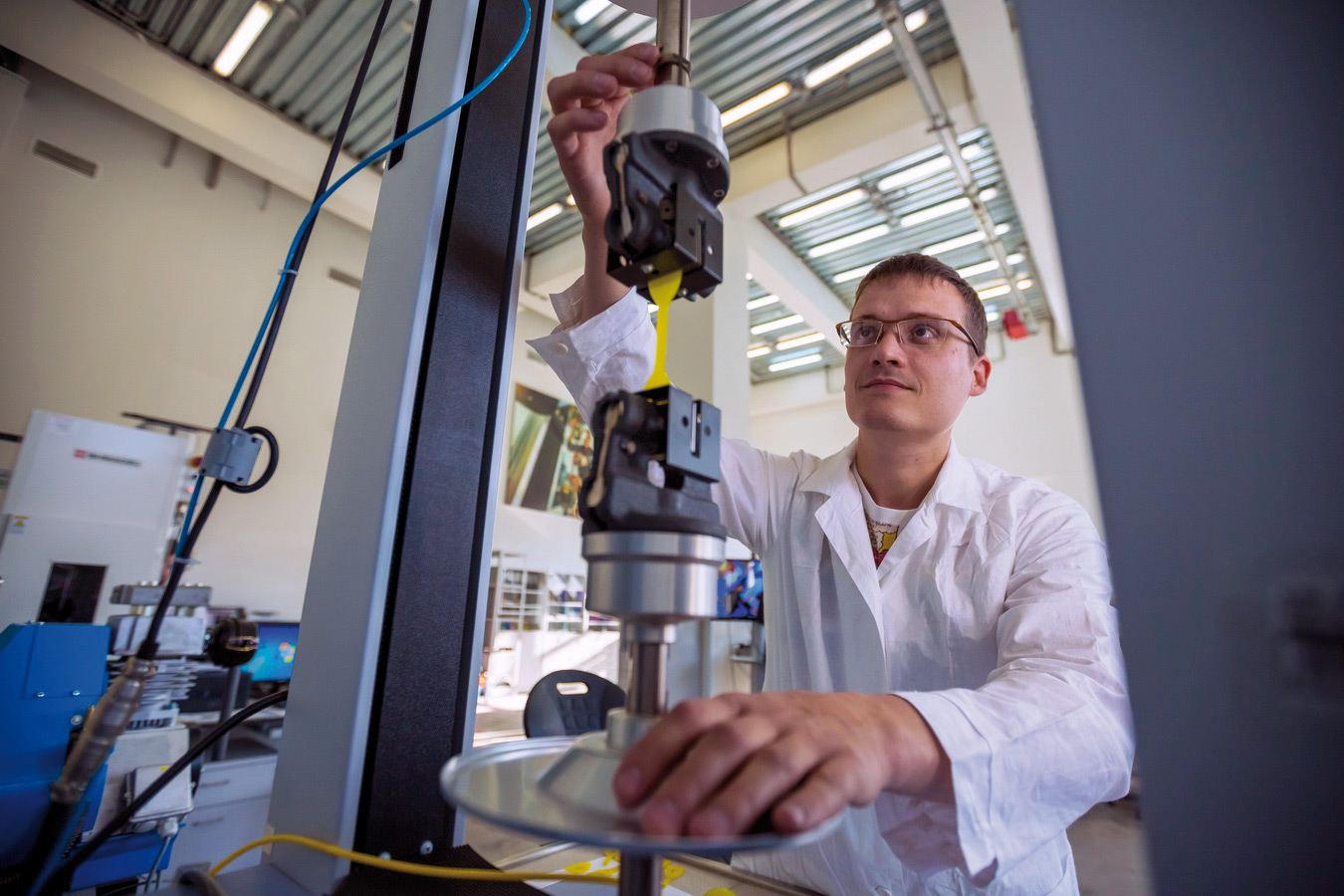 Currently, specialists from the Center of Mechanical Tests and Material Structural Analysis take part in more than 30 different projects. The field of research is quite wide with analysis of metals and composites as well as other construction materials, testing of polymers and ceramics, and special investigations for food, textile and pharmaceutical industries. 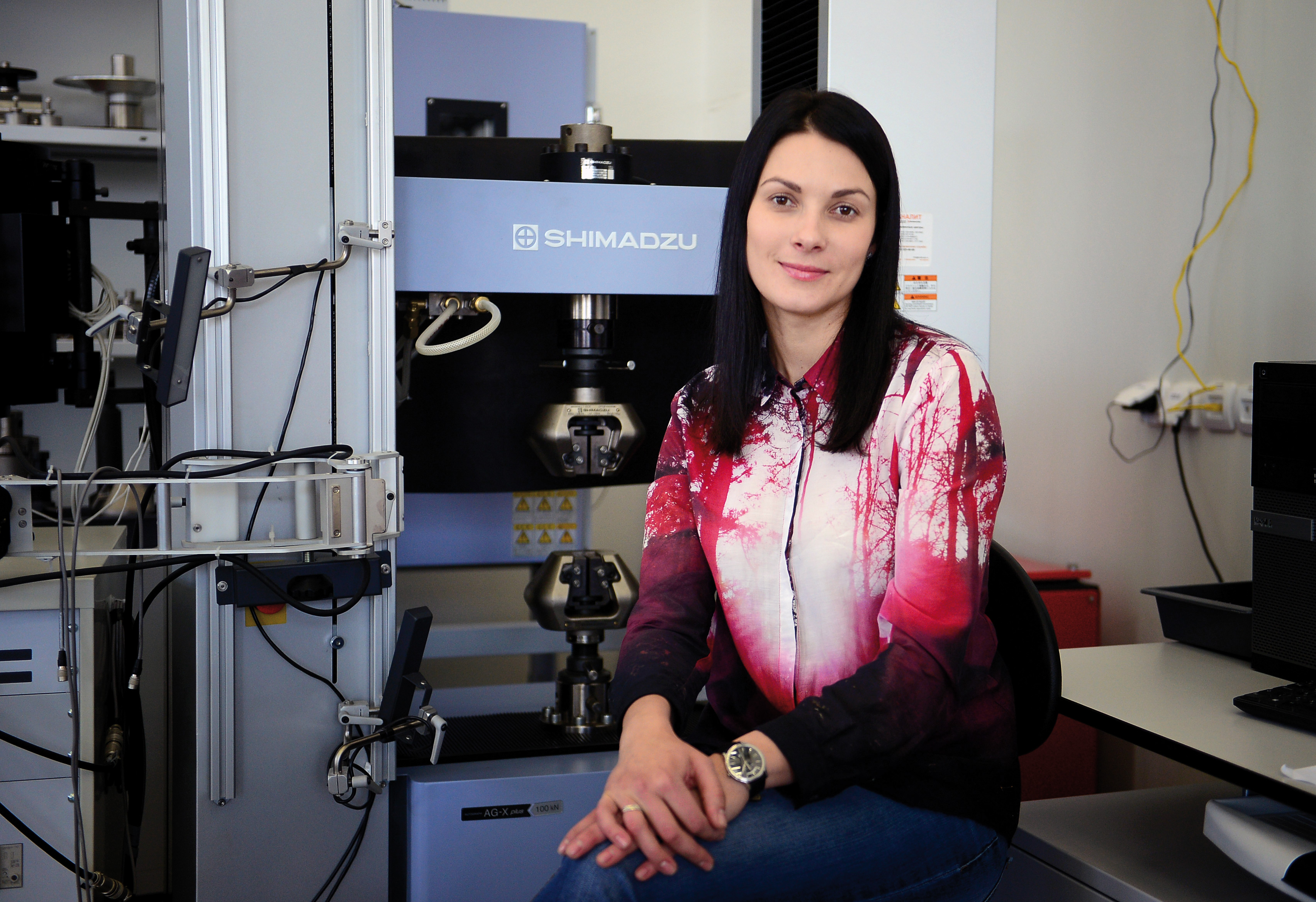 The head of the Center is Dr. Ekaterina Gridasova, Associate Professor of the Welding Department. She described to Shimadzu News the main directions of the Center activity: “We take part in many interesting projects together with the largest Far Eastern enterprises. For example, during the building of bridges across the Eastern Bosphorus Strait and the Golden Horn Bay (Zolotoy Rog), both in Vladivostok, Russia, many tests of high-strength bolts, fittings, cable-stayed connections etc. were made using Shimadzu instruments such as the UH-1000kNI hydraulic universal machine.

Another important project is the development of a new technology for rebuilding of ship diesel engine shaft parts using laser deposition. This technology avoids the need to replace worn-out parts of ship machinery, while repairing these parts very quickly. This is a pioneer project for Russia. The Center of Mechanical Tests and Material Structural Analysis is working on this project together with Far Eastern Branch of Russian Academy of Science and JSC “Shipyard Dalzavod.” The result is expected to be interesting for both navy and civilian ship-building industries.

The laboratory doesn’t only work with metals and alloys. Some time ago, a test run of silent block materials was conducted. These components are used for stabilizer bars in automotive applications. This work was done for “Repair Technology Center“, the manufacturer of automobile industry spare parts. 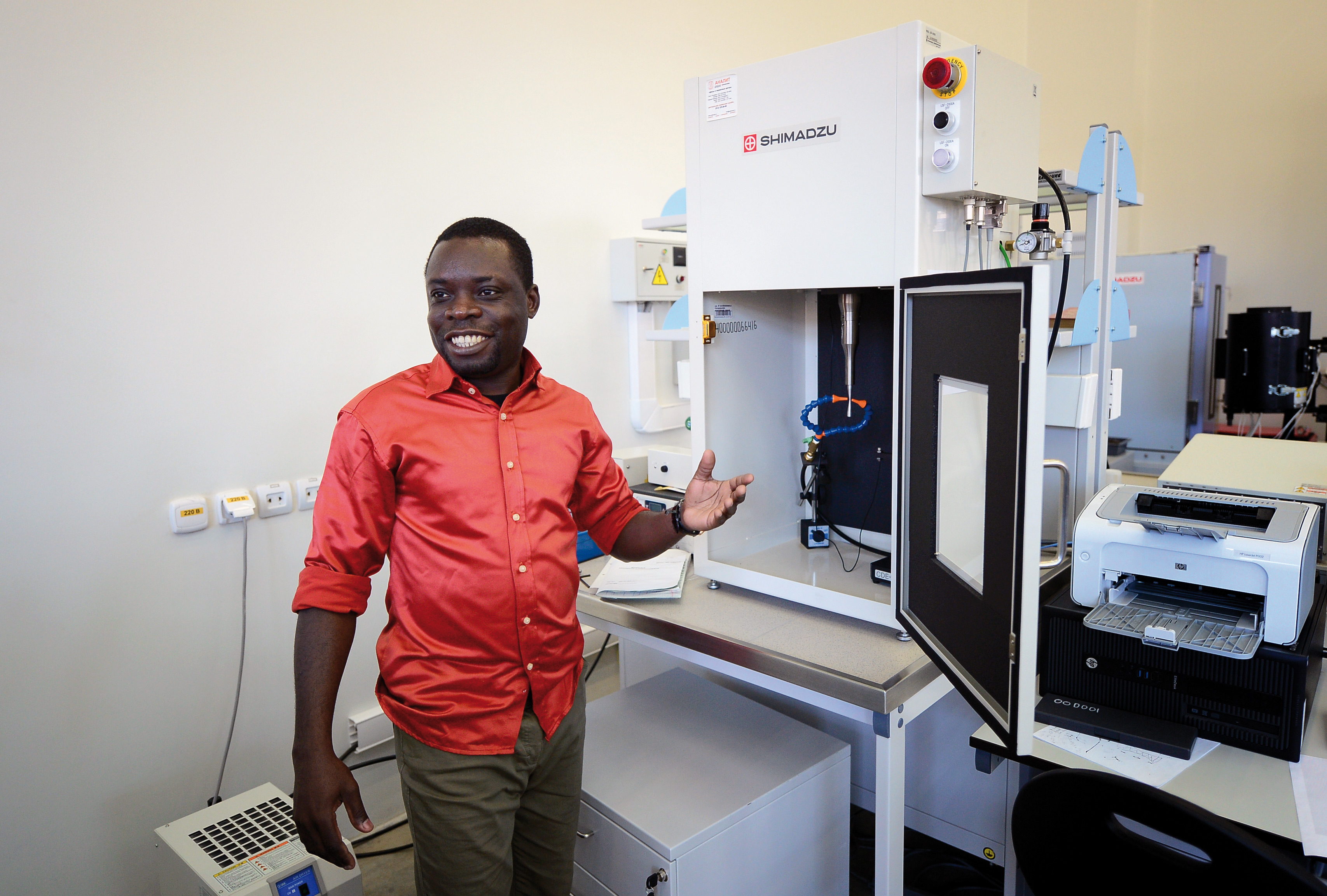 An important sphere of the Center’s activity is the support of University scientific researches. Different investigations are being carried out for many scientific projects. In addition, many Baccalaureate, Masters and PhD theses were written based on work carried out in the Center.

A good example of such research is the investigation of ice mechanical properties. These studies are a part of a large project called “Arctic.” In the second year, many scientists from Russia, China, India, South Korea and Norway are taking part in the International Winter School “Ice Mechanics.” They investigate ice covers of Russky Island water areas at the places of sampling as well as in the laboratory. For compression tests of ice cores Shimadzu’s AG-100kNX universal test machine has been applied.

An important event for the Center was the award of international status. In the beginning of 2015, Far Eastern Federal University (Russia), Material Test Engineering of Dortmund Technical University (Germany) and Welding Research Institute of Osaka University (Japan) signed a tripartite Memorandum. The relationship between these large universities from three different countries is interesting not only because of common scientific research opportunities, but also because it provides new, interesting educational programs for students. 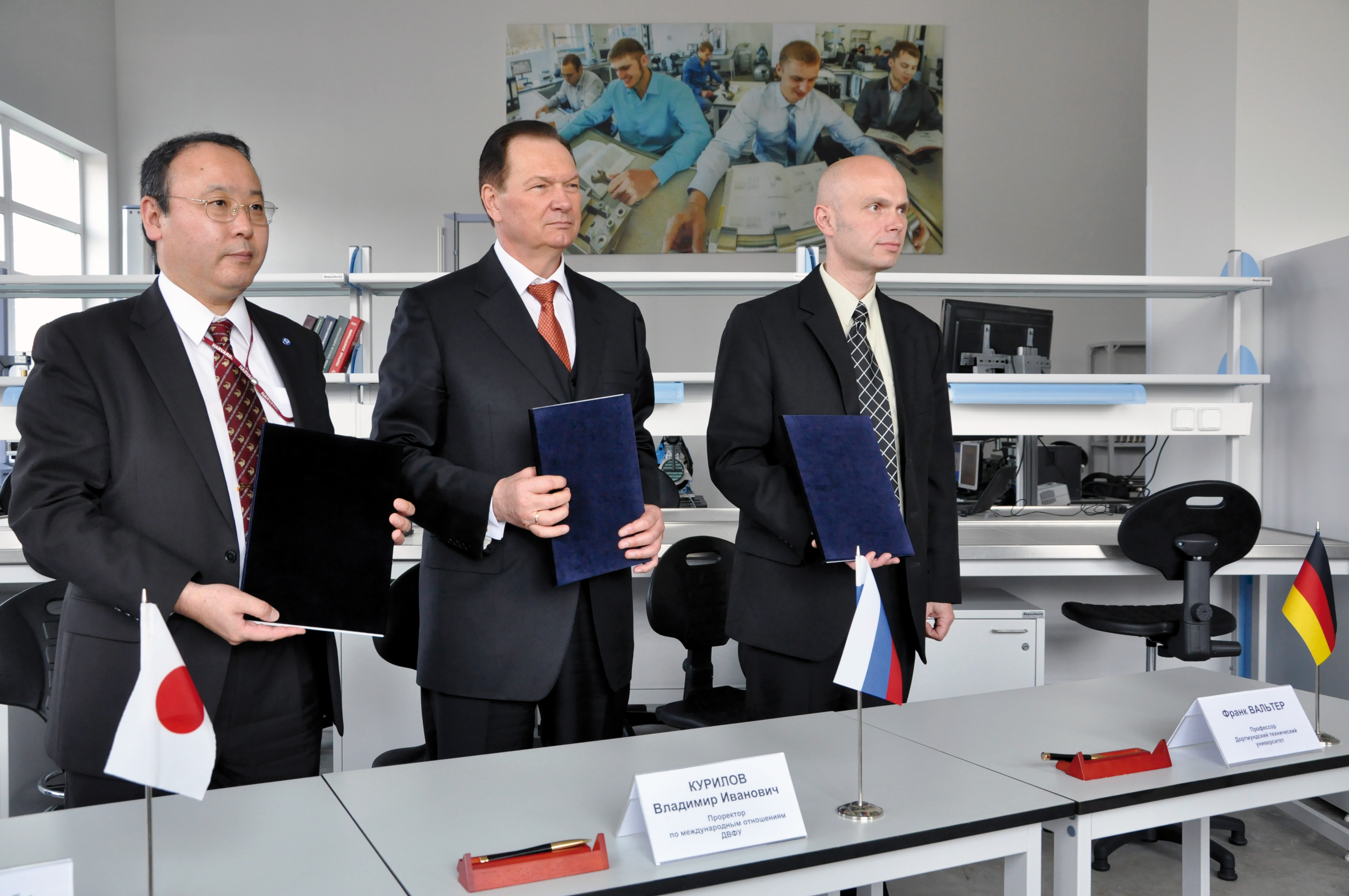 Today, in the framework of the laboratory, the project of friction welding of ship metal plates has been realized. Far Eastern Federal University receives carbon steel samples from Osaka University and conducts static tests of these samples, while colleagues from Dortmund University carry out dynamic tests.

The Center of Mechanical Tests and Material Structural Analysis and Shimadzu have been good partners for a long time. Shimadzu’s staff gives its clients full-scale assistance and support. Shimadzu organized several joint workshops and seminars on the basis of Mechanical Tests and Material Structural Analysis Center. Visitors from different laboratories and plants could see how Shimadzu instruments work, while getting much new information about applications of the equipment in food, pharmaceutical, polymers and electronic industries. Such events increase Shimadzu’s customer network and enable Shimadzu customers to exchange their experiences. 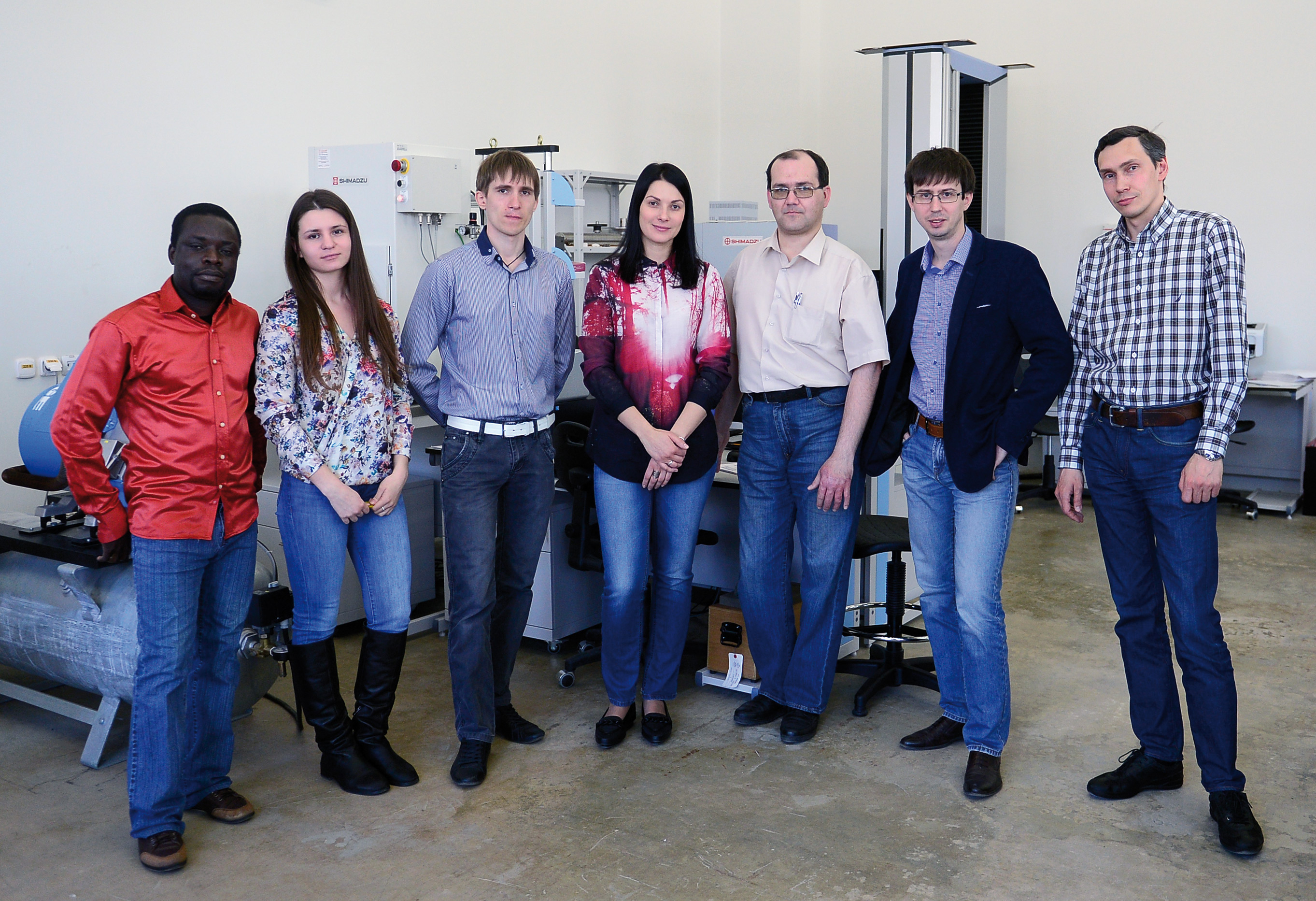 Figure 5: The staff of the Center

Of course, this relationship will grow continuously. For next year, Far Eastern Federal University is planning to organize a Fatigue Tests International Symposium. Shimadzu will support this event. The relationship between Far Eastern Federal University and Shimadzu is a good example of the fruitful teamwork of a world-leading manufacturer of analytical instrumentation and one of the leading Federal universities of Russia.