Free radicals are short-lived molecular fragments of oxygen and are suspected of being responsible for aging processes but also for damage to cells or enzymes. Cells, however, have their own defense mechanisms to counter free radicals. Such antioxidants, like ascorbic acid or coenzyme Q10, react with free radicals and are provided by dietary intake.

UV-radiation, pollutants in the air or chemicals lead to the formation of highly reactive oxygen species, so-called free radicals in the human body.

If they accumulate, they can cause cell damage and other signs of aging, for instance the formation of wrinkles. Free radicals are even associated with a number of diseases – including cardiovascular disease and cancer.

In addition to the body’s own antioxidants mentioned above, substances provided by dietary intake can exhibit similar effects. The best-known examples are vitamins or their precursors. This also includes coenzyme Q10 and its reduced form, which is structurally related to vitamin E and K.

Additionally to its antioxidant properties, coenzyme Q10 is also involved in important biochemical processes such as cellular respiration due to its easy oxidizability. So, how can such a sensitive and easily converted substance be carefully analyzed?

For substances that are sensitive to oxidation, analysis using supercritical carbon dioxide (CO2) offers a gentle alternative to conventional solvent extraction. Supercritical fluids combine the properties of gases and liquids: they are low in viscosity and exhibit high diffusivities similar to gases, but they are also readily soluble like liquids. CO2 (at or above its critical temperature and critical pressure) is the most commonly used supercritical fluid for chromatographic purposes. In addition to its suitable physico-chemical properties and availability, it is highly inert, non-toxic and inexpensive.

So far however, techniques like SFC (supercritical fluid chromatography) and SFE (supercritical fluid extraction) could only be used as individual steps in an analysis. The newest generation of instruments now combines the entire analysis, integrating sample pretreatment, chromatographic separation and detection into a single system. With the online coupling of SFE and SFC, manual extraction and transfer steps are now replaced by a fully automated process. This does not only reduce time and personnel expenditure but also eliminates manual errors that can occur, e.g. during decanting or pipetting.

An additional advantage of the closed online SFE-SFC system is the gentle sample handling. After being placed in the instrument, the samples can be analyzed virtually without decomposition, as the entire analytical process takes place without exposure to light or air and free from humidity. Therefore, the system is ideal for the analysis of sensitive samples, for instance light-sensitive, easily oxidized or readily hydrolyzed substances.

Online SFE-SFC analysis is also a gentle alternative to conventional solvent extraction for the sensitive coenzyme Q10 (figure1). To obtain a direct comparison of the two techniques, the proportion of reduced and oxidized coenzyme Q10 in a dietary supplement was determined using both techniques.

The analyses were carried out using Shimadzu’s Nexera UC (Kyoto, Japan), a modular all-round SFE-SFC system for high-performance, high-speed applications. For solvent extraction, the content of a capsule of the dietary supplement was suspended in ethanol and the coenzyme Q10 was extracted in an ultrasonic bath. After filtration, the sample was analyzed using SFC under the conditions listed in table 1.

For the online SFE-SFE analysis, about 5 µL of the content of the capsule was dripped onto a filter paper and placed directly into an extraction vessel. The automated analysis is subsequently carried out under the conditions listed in table 2. The static extraction step is followed by dynamic extraction in order to transfer the sample to the column, where the actual chromatographic separation takes place. A flow diagram of the process is shown in figure 2. 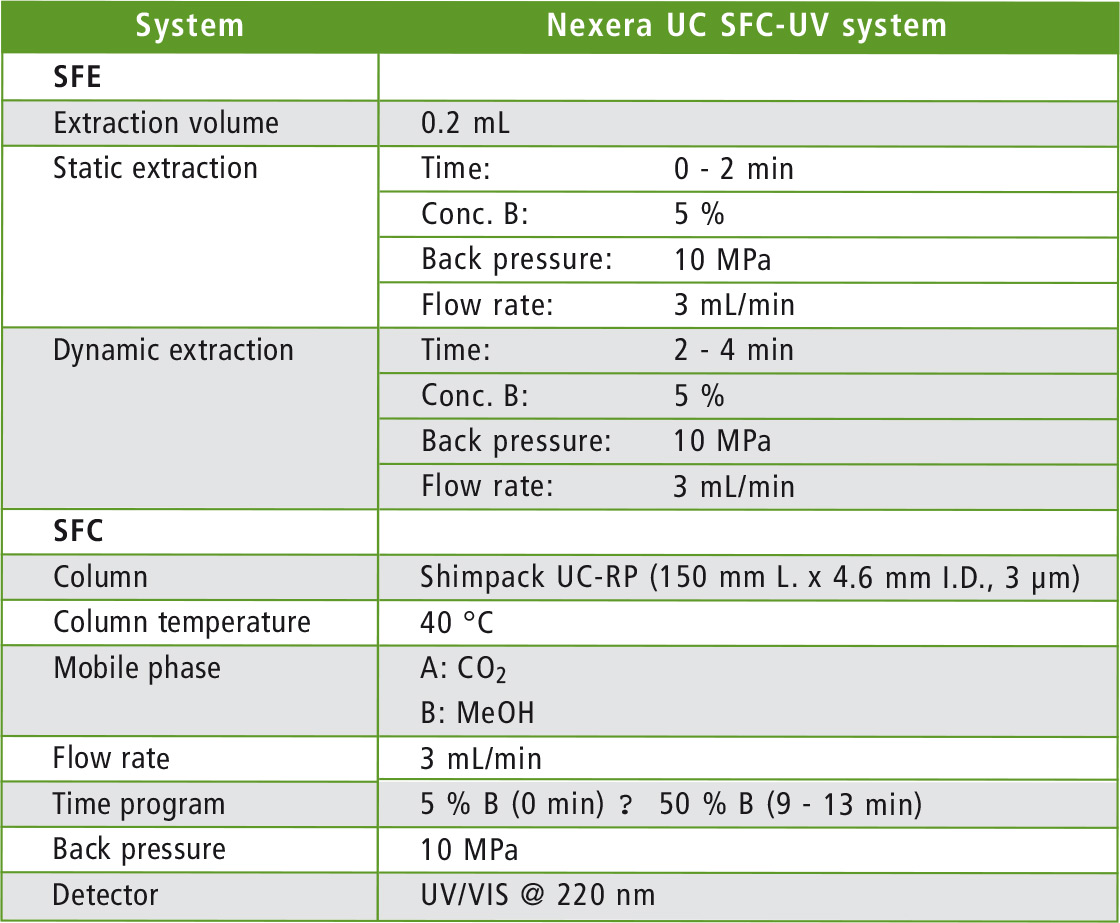 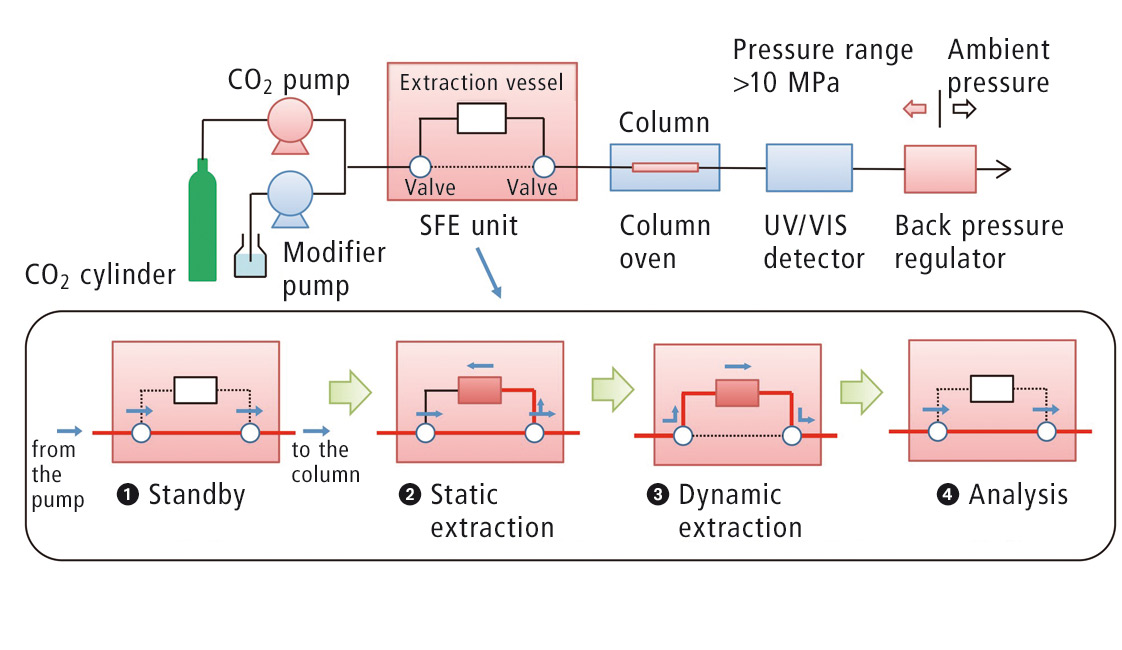 Both chromatograms, each including a standard solution of the oxidized form for comparison, are shown in figures 3 and 4. 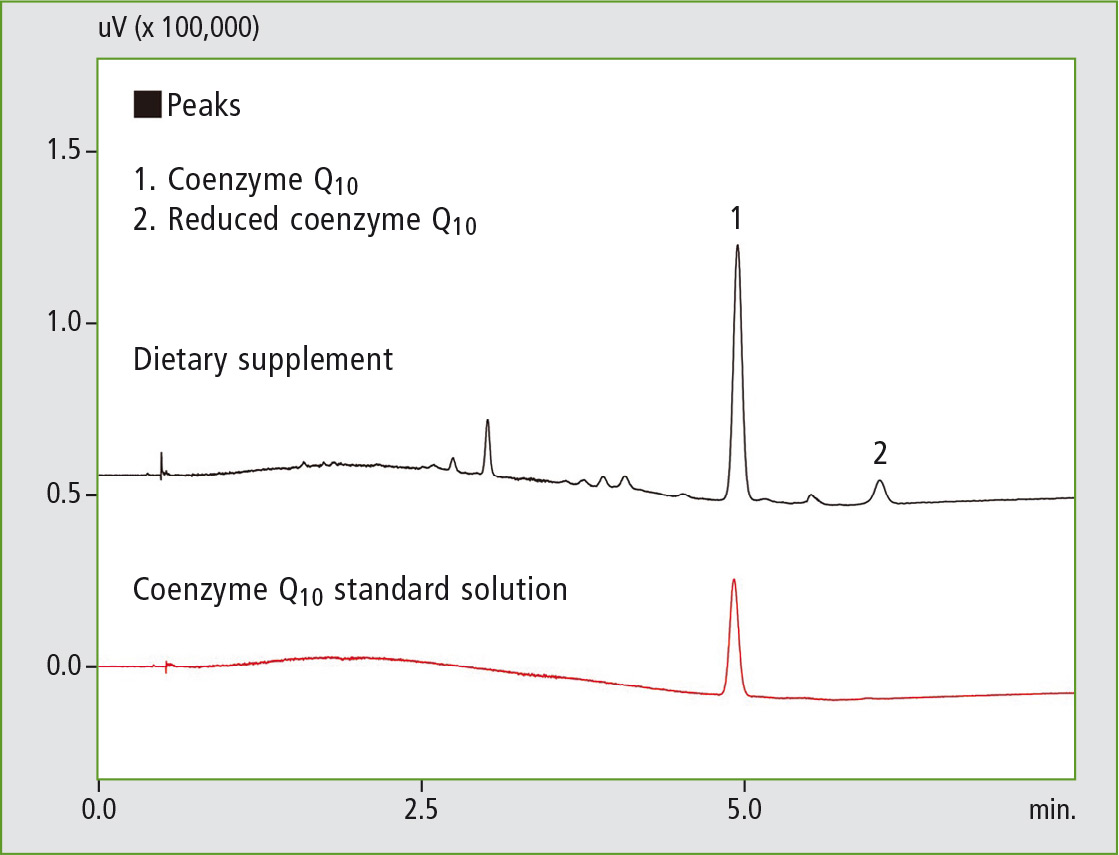 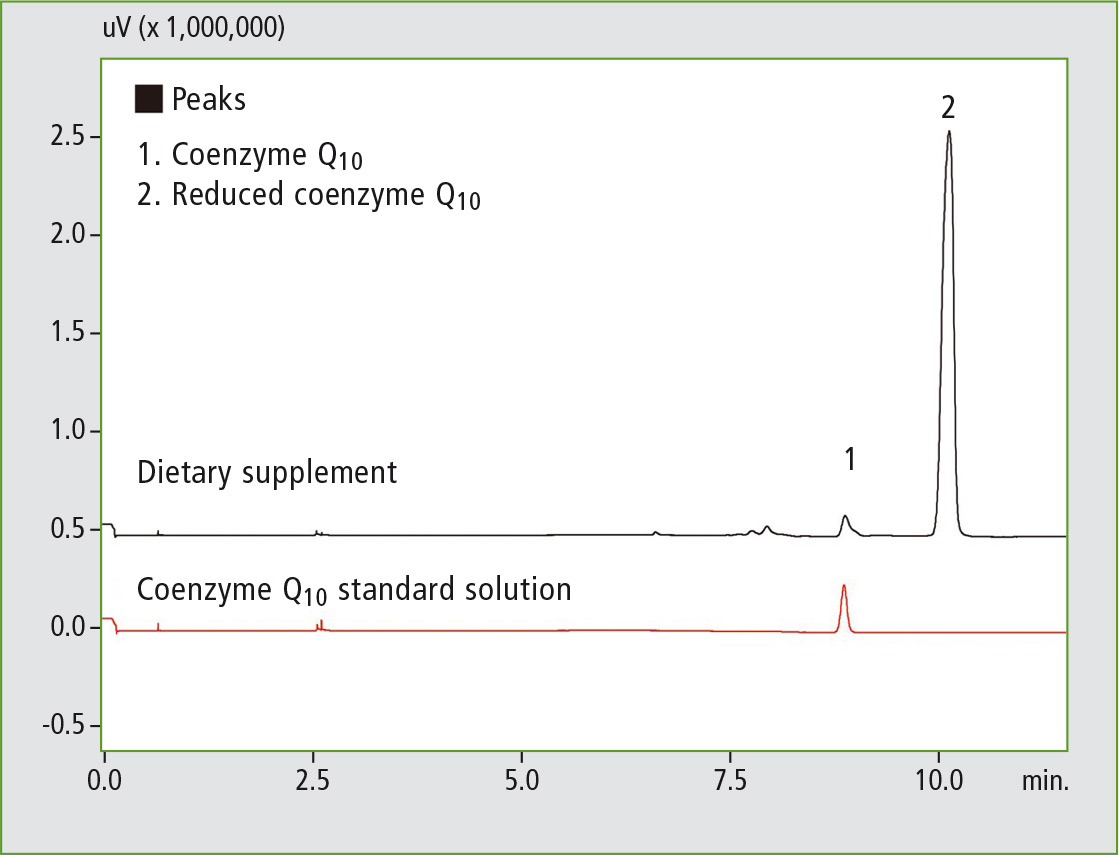 It can clearly be seen that following solvent extraction almost all of the coenzyme Q10 is present in its oxidized form, whereas in the online SFE-SFC analysis only a very small proportion of the analyte oxidized and is largely still present in its original reduced form.

Online SFE-SFC is therefore very well suited for the analysis of sensitive compounds such as substances that are sensitive to oxidation. Additionally, the Nexera UC avoids errors due to its high degree of automation and simplifies sample handling.