Healthy fat in chips and sausages?

A new method for extraction, digestion and analysis of fat in food samples 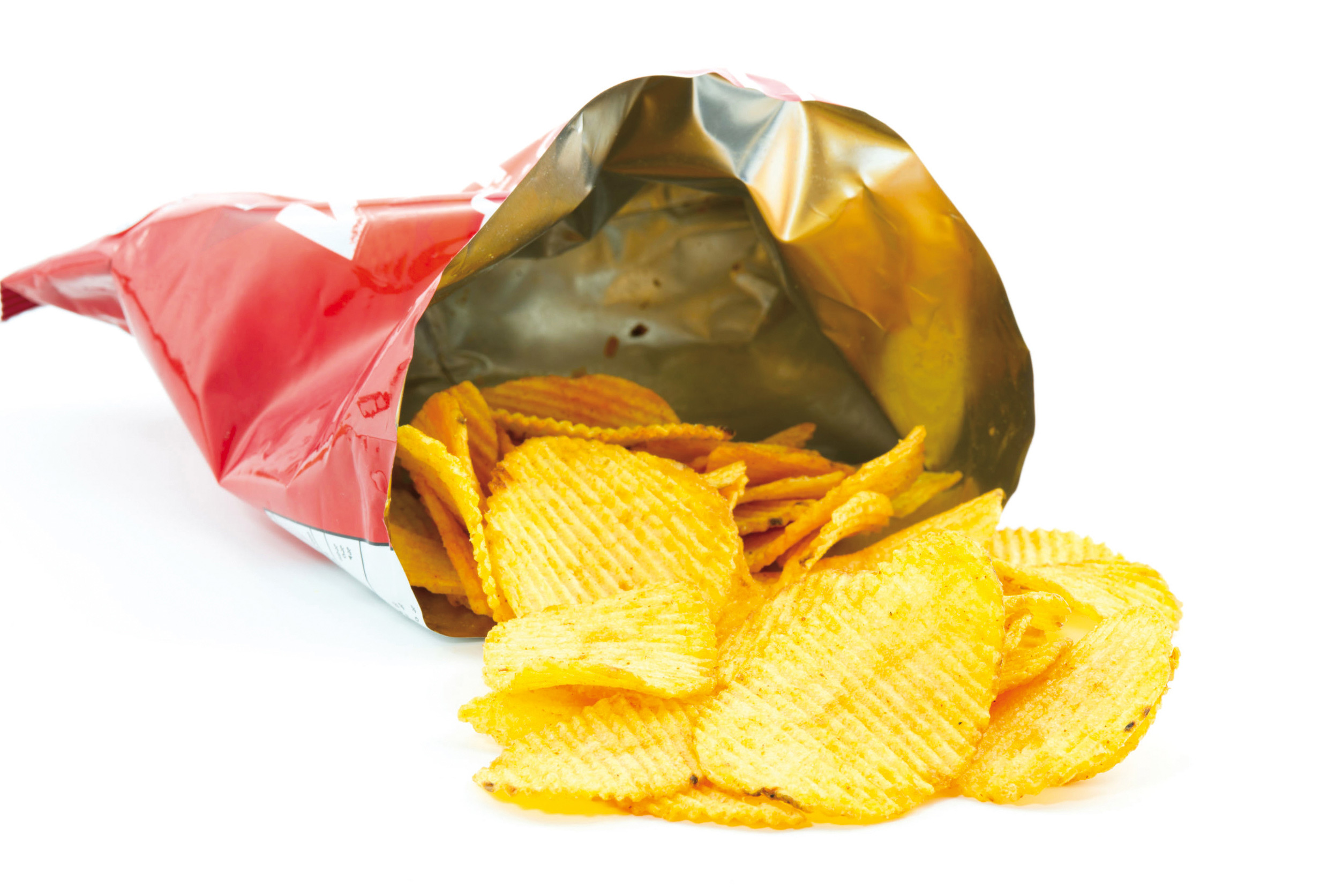 The Regulation (EU) No 1169/2011 of the European Parliament requires the detailed declaration of nutrition values for food as of 2016, especially the differentiation of fat in saturated and unsaturated fatty acids [1].

This differentiation is important in order to protect consumers. For example, the American Dietetic Association (ADA), the European Food Safety Authority (EFSA) and the American “Academy of Nutrition and Dietetics“ recommend to cover less than 35 % of the body’s daily energy requirements by fat; according to ADA, less than 20 % should be monounsaturated fatty acids (MUFA).

The following analysis of saturated and unsaturated fatty acids is done using gas chromatography (GC-FID). This analysis requires the derivatization of fatty acids in fatty acid methyl esters (FAMEs) based on the ISO norm [4].

Unsaturated fatty acids are sensitive to oxidation processes generated through contact with air and influence of heat. That’s why a gentle microwave process has been developed which is applied in a closed system in two steps for various food compartments. This new microwave procedure is faster, cheaper and more environmentally friendly than the conventional ISO procedure.

Conventional ISO procedure
The conventional standard procedure is based on the ISO extraction method (ISO 8262) for total fat determination in milk and milk products according to Weibull-Berntrop and the derivatization of fatty acids in fatty acid methyl esters (FAMEs) based on the ISO method (DIN EN ISO 12966-2).

The ISO 8262 method serves as a base and correlates with the extraction method of Weibull-Stoldt for the determination of total fat content in food samples.

The ISO extraction method according to Weibull-Stoldt is based on a saponified digestion using hydrochloric acid and water, which releases fat bound to proteins in food samples. In the following hot filtration, the fat released remains in the filter. The filter including the fat is washed to neutral and then dried. Finally, the fat is extracted with a proper solvent in a Soxhlet extractor, taking several hours. As soon as the extraction is finished, the solvent is removed using a rotation evaporator and the remainder is dried. Determination of total fat is performed by weighing the dried fat.

Based on the ISO procedure on sample preparation for GC analysis, the transformation of fatty acids in fatty acids methyl esters (FAMEs) requires a sequence of alkaline and acidic derivatization in water-free methanolic environment.

The reaction equations are displayed in figure 1 and figure 2.

Figure 1: Alcaline Derivatization of a Triglyceride with methanol to ester [5] 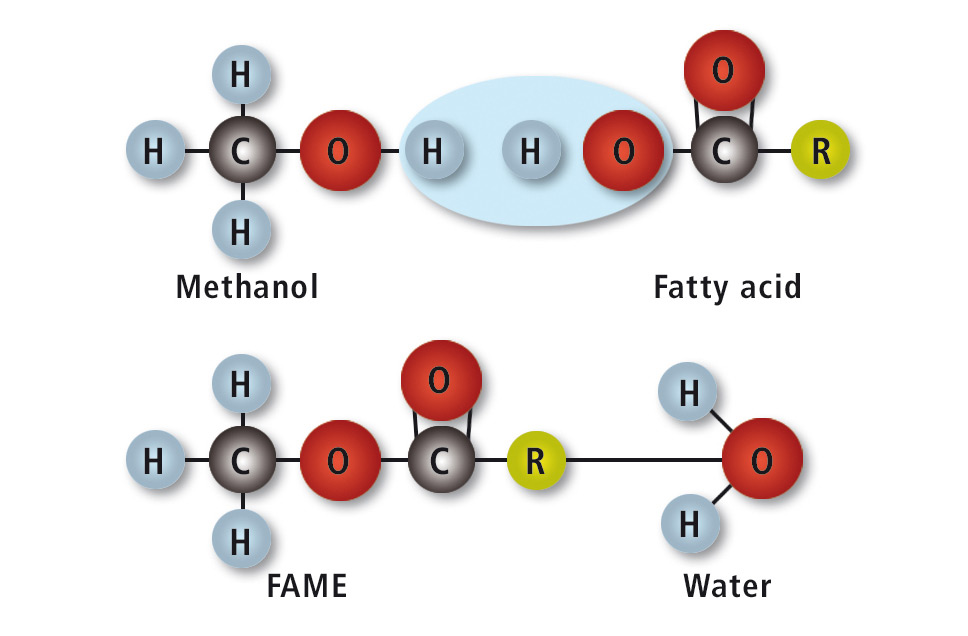 Figure 2: Acidic derivatization of a fatty acid to ester with methanol under formation of water [6]

The MEM has been developed based on the Weibull-Stoldt method and extracts the total fat in a food sample in a closed system under defined conditions using microwave radiation simultaneously.

In a closed system (including MDM), derivatization of the extracted fatty acids is performed under microwave radiation. Transformation of fatty acids in fatty acids methyl esters (FAMEs) also requires a sequence of alkaline and acidic derivatization in water-free methanolic environment for subsequent GC analysis.

Extraction method
The food sample is weighed in a 600 mL glass beaker, in the expectation that a total fat weight of 2 to 3 g will be present. The sample is treated with 100 mL water and 150 mL hydrochloric acid (25 weight-%).

The glass beaker is covered with a glass lid, and the sample is then boiled for 30 to 60 minutes. After the digestion process, the hot sample is diluted with 100 mL of water and filtered in a 2 layer round filter which has been wetted before with hot water. Afterwards, the filters and the residue are washed neutral with hot water. Finally, the filter paper and residue are dried in an oven for one hour at 105 °C. The dried filters are then transferred in the extraction sleeve and finally positioned in a 250 mL extractor (Soxhlet-Apparatus). The round bottom flask of the Soxhlet apparatus (250 mL) is filled with solvent at a volume corresponding to 1.5 times the volume of the Soxhlet apparatus. The temperature of the solvent petrol ether is 40 – 60 °C.

The reflux condenser is then set, the solvent is boiled and the fat is extracted over three to six hours. After extraction, the remaining liquid is fully evaporated in the rotation evaporator.

Afterwards, the open flask is further dried for one hour at 105 °C in order to remove the extraction liquid completely. After cooling, the flask is weighed and the total fat content determined.

The extracted fat is transferred in a 10 mL round flask and treated with 2 mL (0.2 mol/L) sodium methanolate in methanol (8 g sodium hydroxide are dissolved in 1,000 mL methanol).

Sulfuric acid (1 mol/L) is then added in methanol solution until the solution is clear; another 0.2 mL are then added.

Extraction method
0,5 g of sample is weighed in an 80 mL glass vial and treated with 3,5 mL hydrochloric acid (37 weight-%), 7,5 mL water and 5 mL n-Hexan. A stirrer chip is added. The following parameters are set on the Discover SP-X.

After the digestion and extraction, the solvent is transferred in a previously weighed aluminum bowl in order to perform a cold extraction. The digestion in the vial is treated again with 5 mL n-Hexan and then stirred on a magnetic stirrer for one minute. Afterwards, this solvent will be transferred in the aluminum bowl. This cold extraction is repeated three to four times. The solvent with the extracted fat is dried in the heating oven for twenty minutes at 105 °C and the bowl finally weighed. Calculation of the total fat content is done by following equation 1:

For the derivatization (MDM), one or two drops of the dried fat are treated in a glass vial with 10 mL water-free methanolic potassium hydroxide solution (2.5 weight-%), and a stirrer chip is added.

After finishing the alkaline derivatization, the vial is cooled down in a water bath. 14.25 mL Methanol and 0.75 mL hydrochloric acid (37 weight-%) are added, and the acidic derivatization is generated with following parameters on the Discover SP-X

After finishing the derivatization, the vial is cooled down in a water bath. 10 mL n-Hexan are added, and the vial is turned twice from bottom to top. The generation of overpressure must be avoided. The glass vial is afterwards filled with saturated sodium chloride solution up to the top. The solvent needs to be transferred with a pipette to a 10 mL GC vial, including sodium sulfate or magnesium sulfate as drying agent (approx. 0.2 g) for possible water residue. This solution is now ready for the analysis of FAMEs using GC-FID.

GC analysis:
For identification and quantification of FAMEs, a 37 Standard-Mix (Supelco) has been used and analyzed on GC-2010 Plus AF with FID detector.

The following parameters have been set on the GC:

The temperature program starts at 130 °C with a hold time of one minute. Afterwards, heating continues with a heating rate of 5 °C/ minute until reaching a temperature of 240 °C which then stays constant for ten minutes. The total time is 33 minutes.

The gas chromatographic method with flame ionization detection has been optimized for separation of almost all fatty acid derivated FAMEs.

From 37 fatty acids contained in the standard mix, 36 fatty acids have been identified. Two fatty acids C18:1-cis and C18:1-trans could not be separated, as they co-elute. But this has no influence on the evaluation and differentiation between saturated and unsaturated fatty acids since both co-eluting fatty acids are unsaturated. 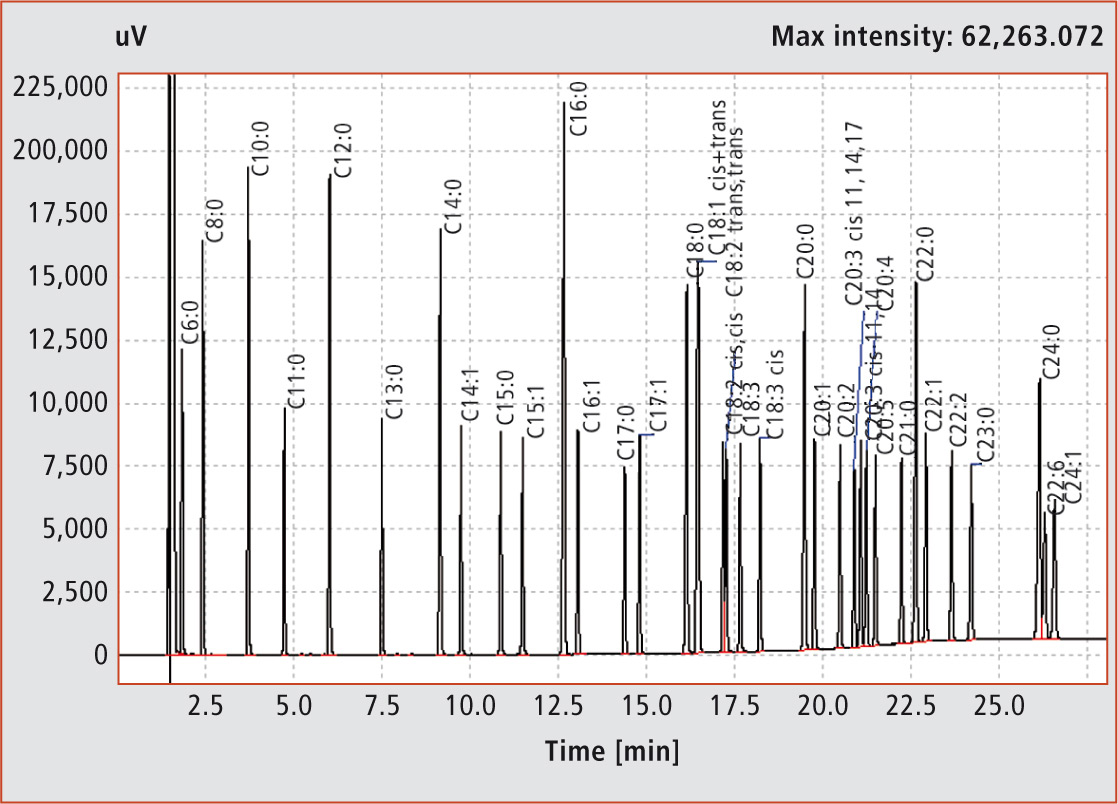 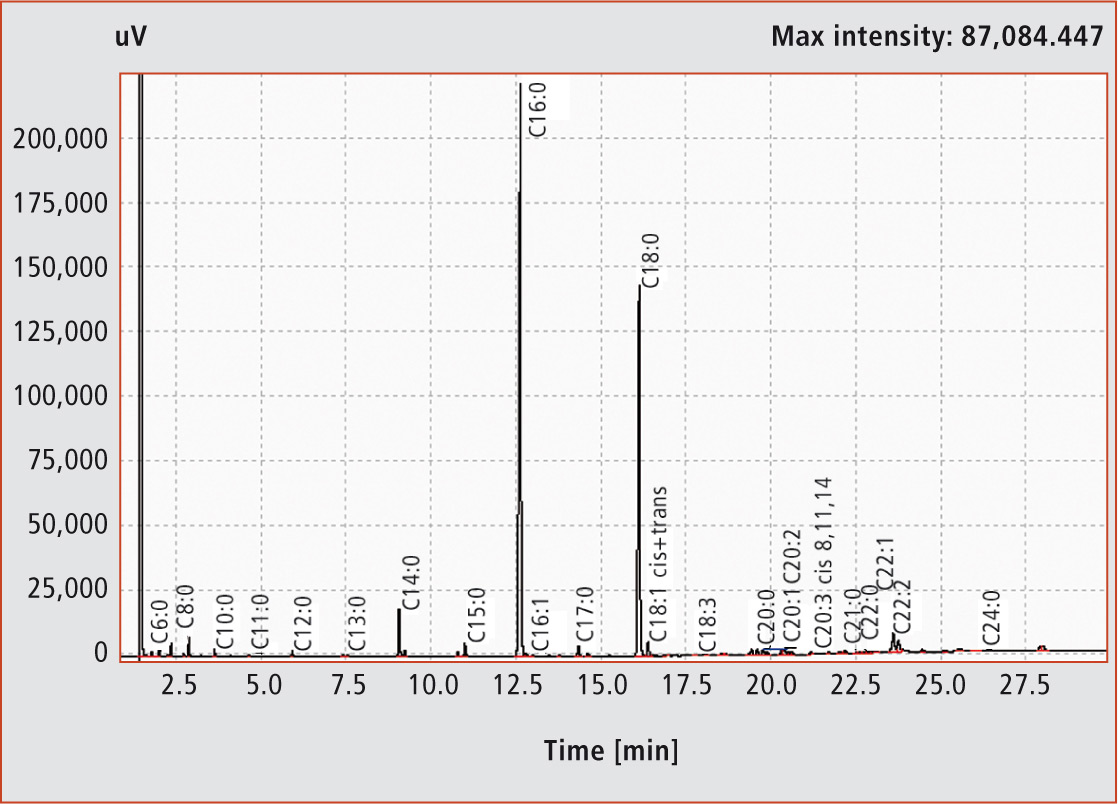 Figure 4: Chromatogram of fatty acids in a sausage sample, derivatization according to ISO procedure and identified FAMEs 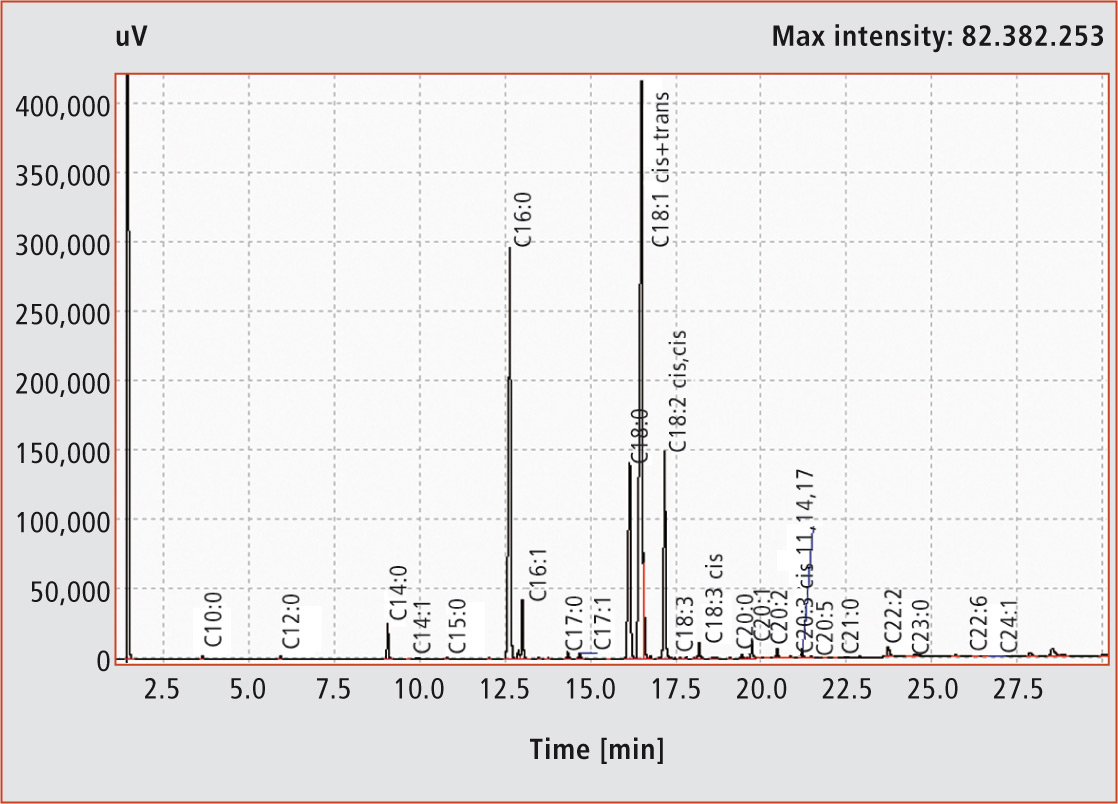 Figure 5: Chromatogram of fatty acids in a sausage sample, derivatization according to microwave procedure and identified FAMEs

A comparison of the chromatograms (figure 4 and figure 5) shows a significant difference in the FAMEs. The results on C18:1-cis+cis using the microwave procedure are significantly higher in comparison to the ISO procedure.

Table 1 shows that the results of the ISO method have a significant difference in comparison to the microwave method. For a more precise comparison, the peak areas of saturated and unsaturated fatty acids are used and displayed in diagram 1, showing the difference of the fatty acid ratios between the ISO and the microwave method on sausage samples. 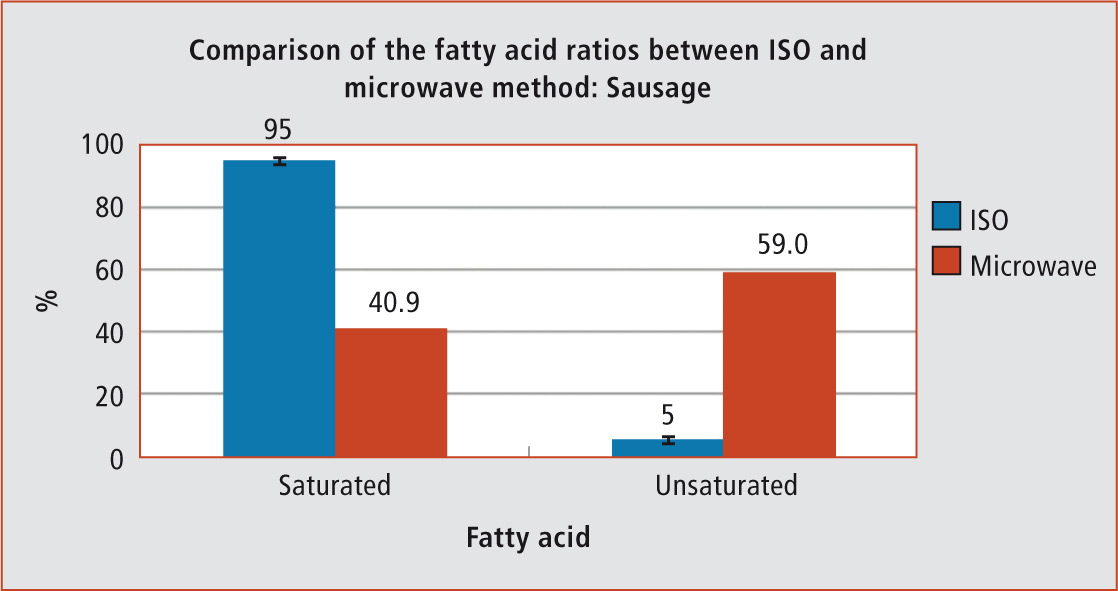 Diagram 1: Comparison of the fatty acid ratios between ISO and microwave method on sausage samples 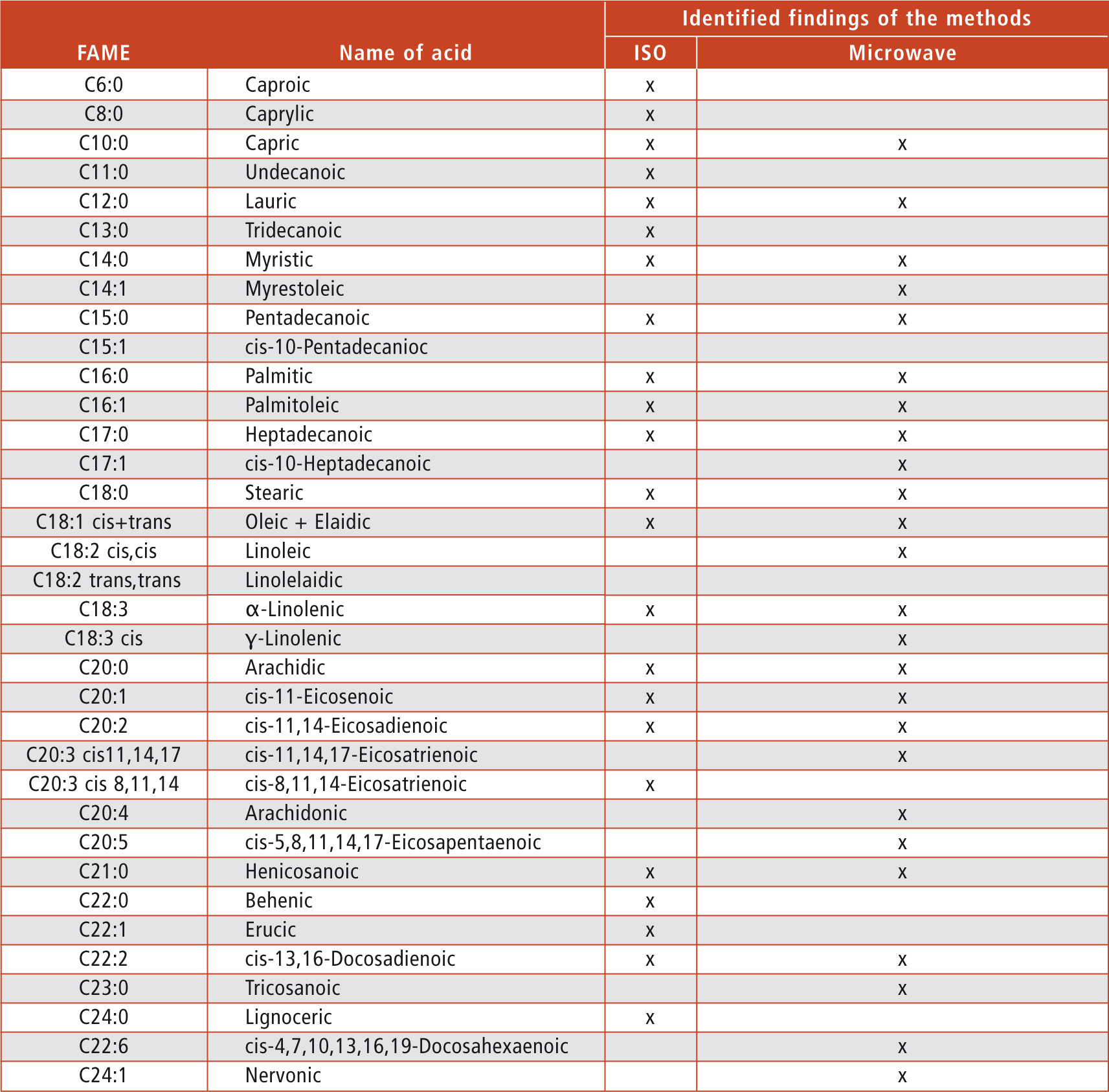 Comparison of both methods show that the result of unsaturated fatty acids with the microwave technique is ten times higher than the ISO method. These elevated results on unsaturated fatty acids could be observed in the same way during determination of other food samples such as milk powder, chocolate and potato chips, as displayed in diagram 2. 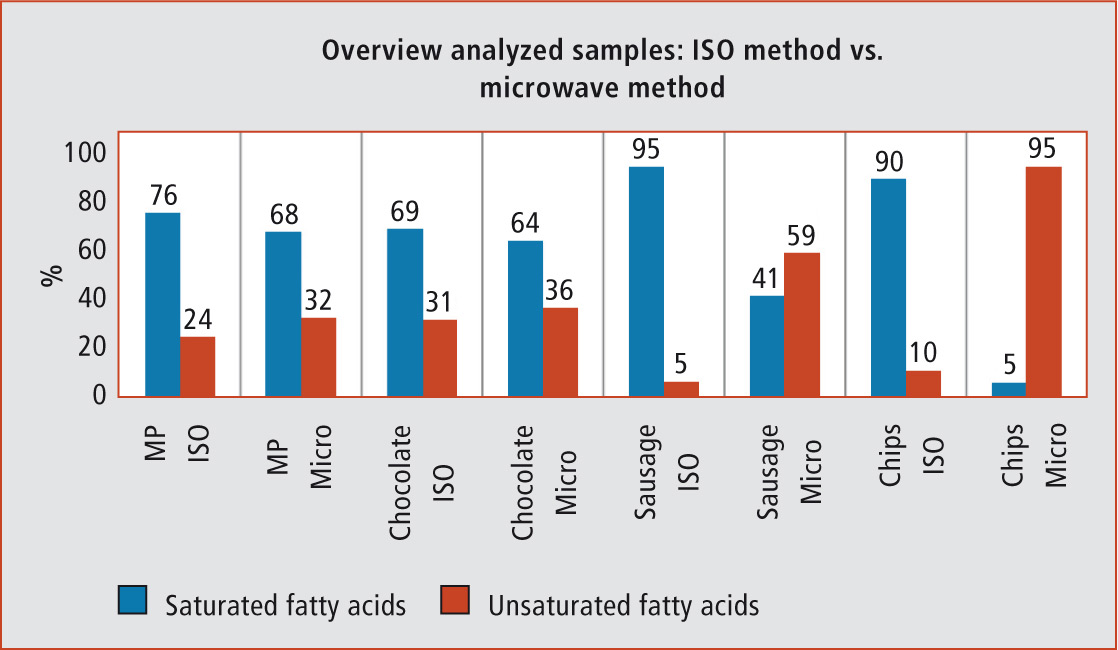 The declaration of food samples is increasingly more complex. For consumers, the declaration is very important and therefore needs a certain transparency. The EU regulation 1169/2011 demands a detailed declaration of food samples. Most important is the differentiation of total fat in saturated and unsaturated fatty acids, which is the top criteria for the consumer to differentiate between healthy and unhealthy food, as has been the subject of two studies. The determination of total fat content as well as unsaturated and saturated fatty acids is regulated in ISO norms.

In this work, two methods have been developed. The first method represents a procedure for digestion and extraction of the total fat content in a closed microwave system, based on a method of Weibull-Stoldt. Food samples from different areas (dairy products, luxury foods, meat and pastries) have been selected, and the application of the total fat determination using the microwave method in a closed system has been evaluated.

It has been found to be a universal method for the determination of the total fat content in different food areas.The second method corresponds to a microwave method, also in a closed system for derivatization of fatty acid in FAMEs which are then analyzed in a GC-FID system.

The use of the developed microwave extraction method shows that the method is best suited for determination of the total fat content of food samples.

In the second method, food samples have been analyzed for 37 different fatty acid methyl esters. This enables a comparison between the DIN method for digestion and extraction of the total fat content of a food sample with an ISO method for derivatization of extracted fatty acids in FAMEs, with the developed microwave procedure consisting of microwave extraction method (MEM) and microwave derivatization method (MDM).

Read for you
Chromatography Today 5-6/16