Carola Schultz from the MEET Battery Research Center at Munster University, Germany, has been the first of young scientists who were awarded with lab time at the Laboratory World in Duisburg, Germany for her research project. Here are some insights in her topic:

Lithium ion batteries are used day-in-day-out in laptops, cell phones or digital cameras. They are also installed in e-bikes and electric cars, mainly due to their low weight compared to other types of batteries such as the lead accumulator. They are characterized by their high specific energy and high energy density. [1]

Figure 1 shows the functional principle of a lithium ion battery. Often, the cathode consists of lithium transition metal oxides. The anode material is usually graphite. During the charge process, lithium ions move through the electrolyte from the cathode to the anode and are incorporated between the graphite layers. The corresponding electrons travel to the anode through an external electric circuit. During discharge, the process is reversed and usable electrical power is supplied. 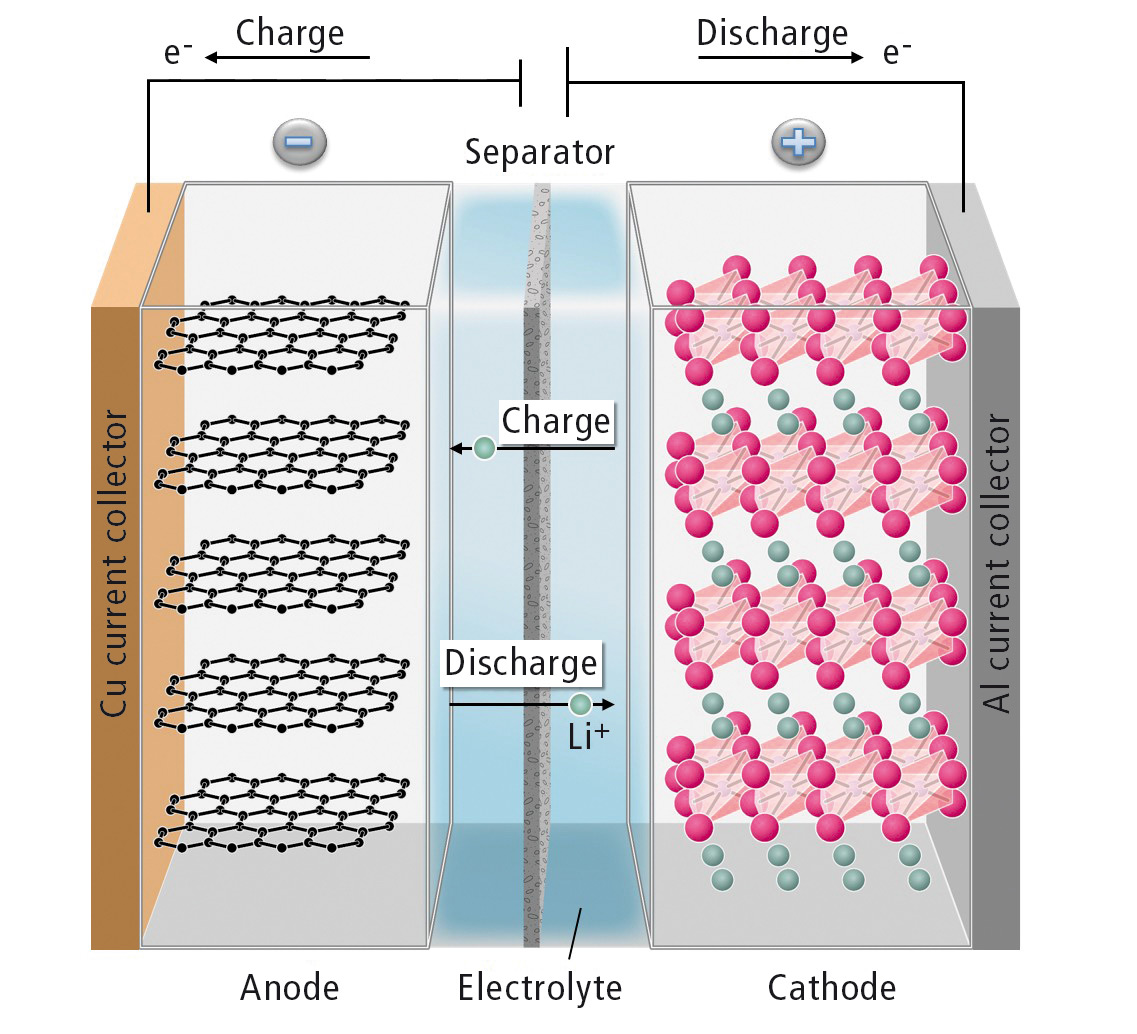 Figure 1: Schematic representation of the functional principle of a lithium ion battery

The anode and cathode are separated by an electronically insulating separator. This way, the cell is protected from short-circuiting, the same time it is permeable to lithium ions. The electrolyte enables ion transport between anode and cathode. 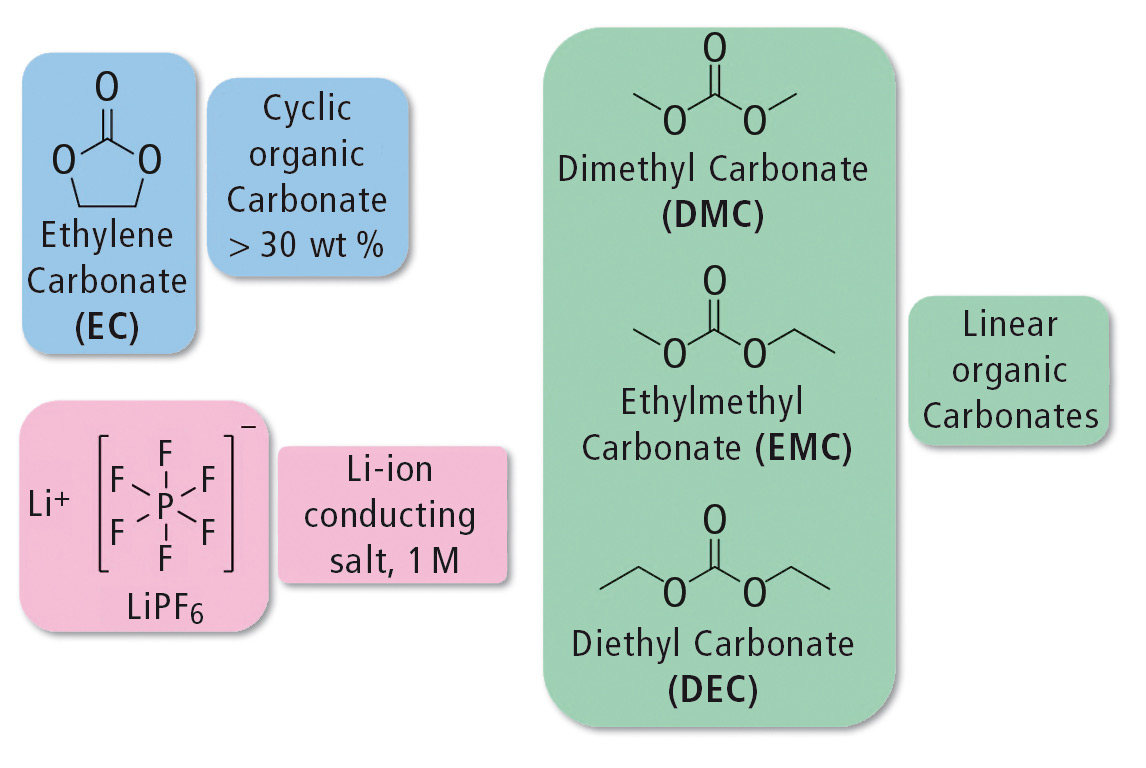 Figure 2: Structures of the main components of an electrolyte

When the electrolyte is aging

The conducting salt, which is chemically and thermally unstable, is subject to so-called aging during the charge and discharge process. This can lead to the formation of a variety of different (for instance phosphate-based [2] or carbonate-based) aging products. An example is the formation of the aging product group of polycarbonates, shown in figure 3 [3, 4]. This is further investigated below.

The fact that batteries age may well be confirmed by anyone who has owned a battery for a while. The battery lifetime is limited because repeated charging and discharging reduces the capacity of the battery. To understand the underlying aging mechanisms and to be able to counteract them requires analytical methods for the identification and quantification of aging products.

Within the lab4you research program for young scientists, it was the aim to develop such a method using LC-MS. The focus of the investigation was on the electrolyte. The following mass spectrometers were used for method development: the LCMS-IT-TOF and the LCMS-8040 (triple quadrupole LC-MS/MS).

The benefit of the LCMS-IT-TOF is the combination of 3D ion trap and a time-of-flight mass analyzer. This offers a high mass accuracy as well as a high mass resolution in all MS and MSn stages.

Using the LCMS-IT-TOF, the aging products were qualitatively analyzed, i.e. the structures were elucidated with the help of the MSn function. An example for the structure elucidation of many aging products via MSn is the fragmentation pattern of diethyl phosphate (DEP) in figure 4 with its corresponding spectra. Despite its molecular mass of 154 amu, the structure of DEP could be elucidated with the help of an MS4 analysis. The main molecule with m/z = 155.046 was detected via MS1. The loss of a C2H4 group with m/z = 127.015 could be measured in the MS2 stage. Another C2H4 group was cleaved off in the subsequent fragmentation step. The resulting phosphoric acid in MS3 with m/z = 98.985 is dehydrated in a final fragmentation step, leading to a molecule with m/z = 80.972 in the MS4 stage. 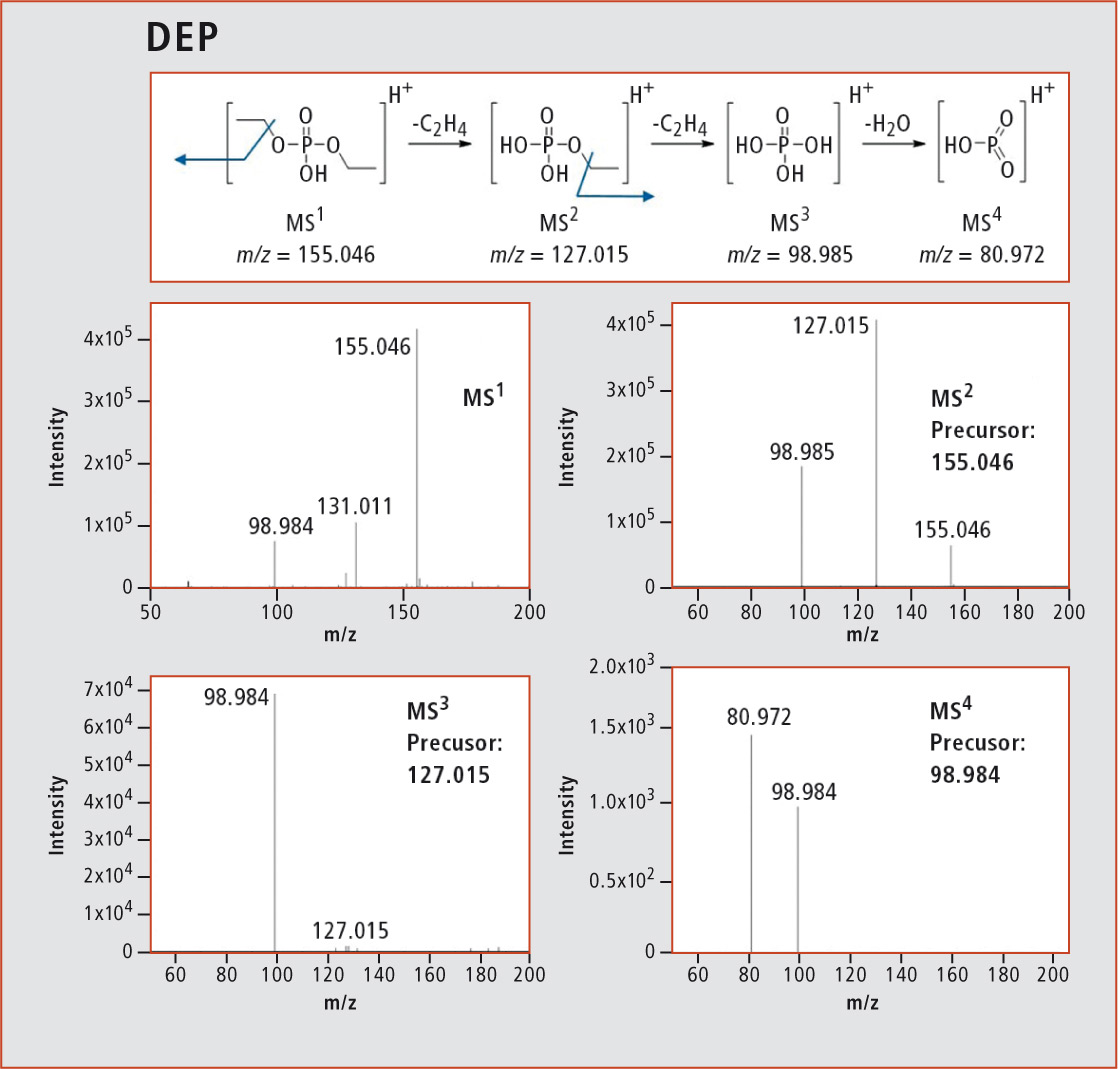 More aging products identified in the course of the lab4you program

As there are no commercially available standards for all aging products, the MSn function for structure elucidation is crucially important and useful. Thus, during the lab4you program, many aging products, which are not available as pure substances, could be identified. As an example, some polycarbonates that were detected in thermally aged (60 °C) electrolytes as well as in electrolytes extracted from cycled batteries are listed in table 1. 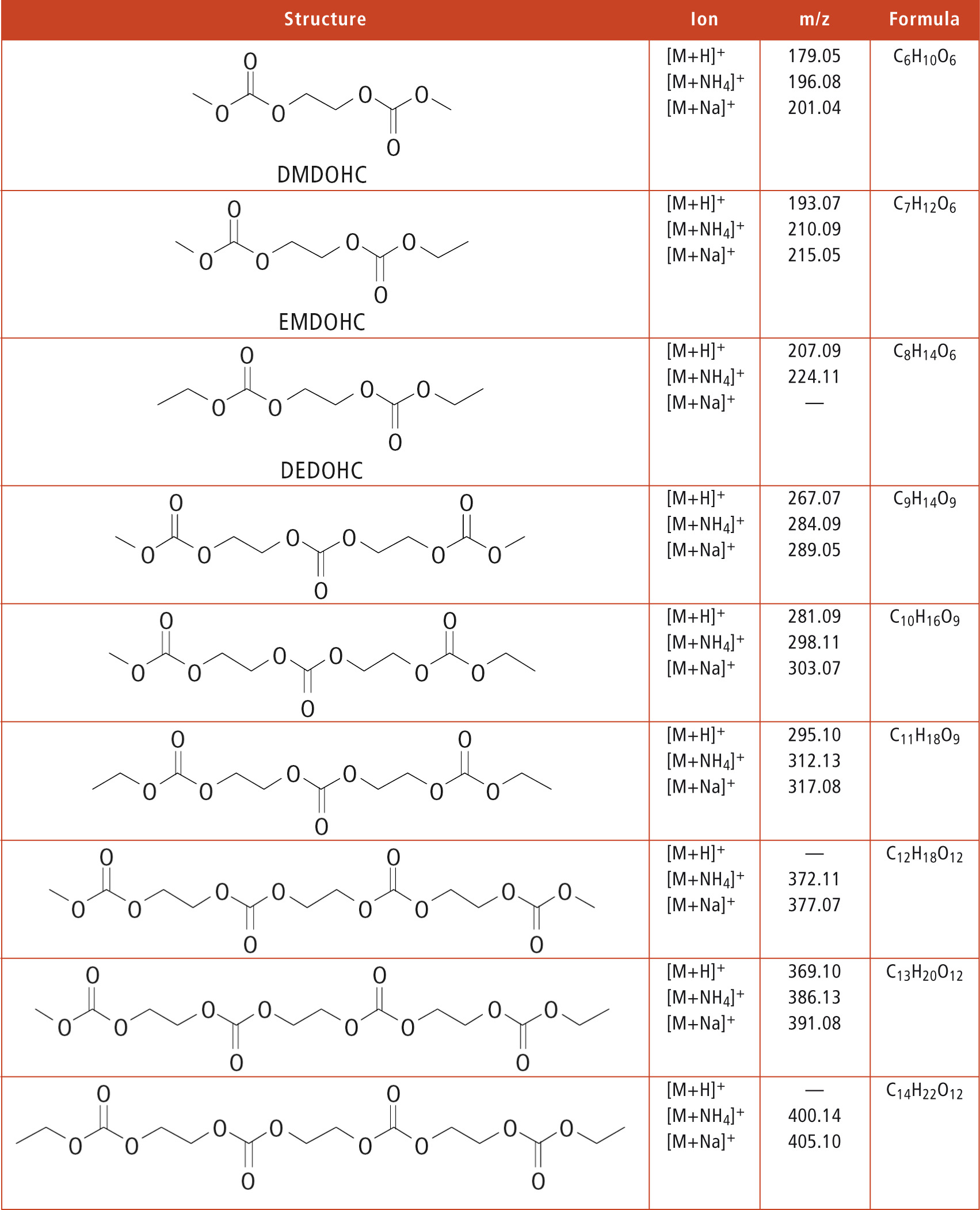 Table 1: Polycarbonates that were detected via LCMS-IT-TOF in electrochemically and thermally aged battery electrolytes

It becomes clear that this substance class of polymerized aging products alter the function of an aged battery by reducing the conductivity in the electrolyte and increasing its viscosity. Furthermore, organic electrolytes with LiPF6 are highly water-sensitive. Even brief contact between an electrolyte and air causes the formation of many aging products, such as DEP whose structure elucidation is shown in figure 4.

Charging and discharging of a battery as well as elevated temperatures (> 55 °C) lead to the formation of aging products. This could be confirmed, among others, in this study on the various aging processes in the battery and electrolyte.

The main components of the electrolyte as well as the commercially available aging products were quantified in the MRM mode using Shimadzu’s LCMS-8040 triple-quadrupole mass spectrometer. In addition, structural elucidation via LCMS-IT-TOF was confirmed with LCMS-8040 and further supported by the extended mass range – which in the triple quad is also available for masses < m/z = 50.

A total of nine substances, main components as well as aging products were quantified. These included EC, DMC, EMC, DEC, DMDOHC, DEDOHC, triethyl phosphate (TEP), dimethyl phosphate (DMP) and DEP. A C18 pentafluorophenyl phase (2.1 mm x 100 mm; particle size 2 µm) was selected. The mobile phase consisted of water mixed with 0.1 % formic acid and methanol. With this column and mobile phase combination, all nine substances could be separated and quantification of these substances in various electrolytes could be carried out.

Method development for the identification, separation and quantification of electrolyte components as well as their aging products using LCMS-IT-TOF and LC-MS/MS could successfully be completed. This method helps to understand battery aging and can thus contribute to ‘anti-aging’ research for batteries.

For their research project, interested students can apply until October 31st 2016 to be selected for being awarded with free lab time at Shimadzu’s cutting-edge ‘Laboratory World’ in Duisburg, Germany. More information: www.shimadzu.eu/lab4you

My experiences during the lab4you research program

Because of the interesting work, I can highly recommend the lab4you program to everyone. This program provides a unique possibility to carry out ones own research using the equipment available in Shimadzu’s Laboratory World, where participants can specifically use those instruments that will deliver the best possible results for their respective analytes and their desired objectives. For all this as well as with regard to the available measurement time, Shimadzu’s Laboratory World offers far more opportunities than most universities could ever offer.

I was able to work independently; there were no preconditions so that I could make all my own decisions. This had a positive effect on my research, but of course, it also requires very careful project planning in advance.

I have very much appreciated the many possibilities for my research project as well as the excellent technical support regarding the equipment in the Laboratory World. In case of problems or technical questions, I was always helped immediately by the friendly and helpful product specialists or by the service team. All in all, I had a great time at Shimadzu who provided me with valuable results, nice experiences and, of course, interesting insights into the working world.